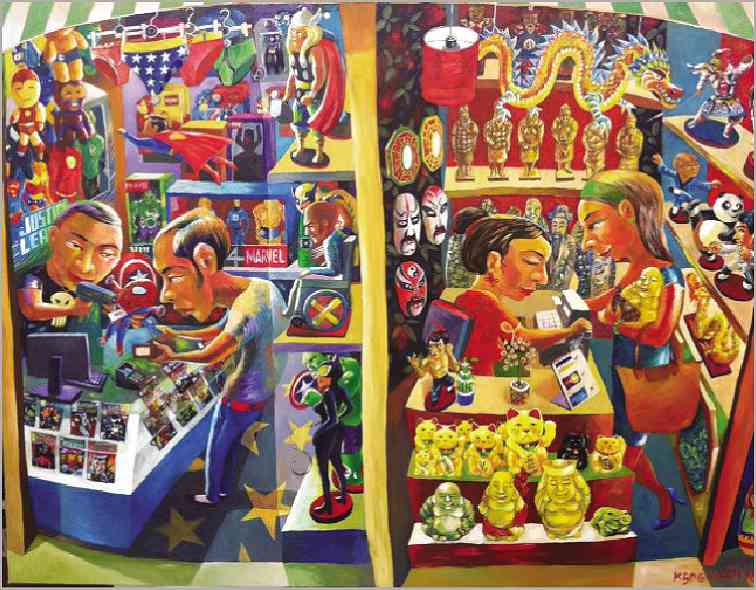 Kris Soguilon has always regarded people-watching as an entertaining pastime.

In “The Pageantry,” his exhibition at Utterly Art gallery in Singapore’s Chinatown area, the 41-year-old artist shows canvases bursting with images and bright colors inspired by his observations as a Filipino living in North London, where he has been based since early 2000.

Although he insists that his point of view has not been influenced by geography, the underlying theme of his works—multiculturalism and the frenetic energy that distinguishes a world capital—evidently takes place outside of Kalibo, Aklan, where he is from.

Most of his works take place in busy environments, some of them inspired by the sights and sounds of bustling Sunday markets like Edmonton Green, where fruits and vegetables are not the only ones on sale, but also grooming services like haircuts, nail-cleaning and eyebrow-threading, which are often the expertise of specific immigrants—thus in “Vanity Fair” you see five scenes on one canvas comprised of a Greek barber, Chinese manicurist and Thai foot masseur, and so on.

In “Super Powers,” the UP Fine Arts graduate juxtaposes Western and Eastern concepts of heroes: One stall sells action figures, the other one stocks buddhas and bagua.

Soguilon may be capturing scenes from another country, but with his lively palette and horror vacui style, it’s undeniable he’s seeing it from the eyes of a Filipino.