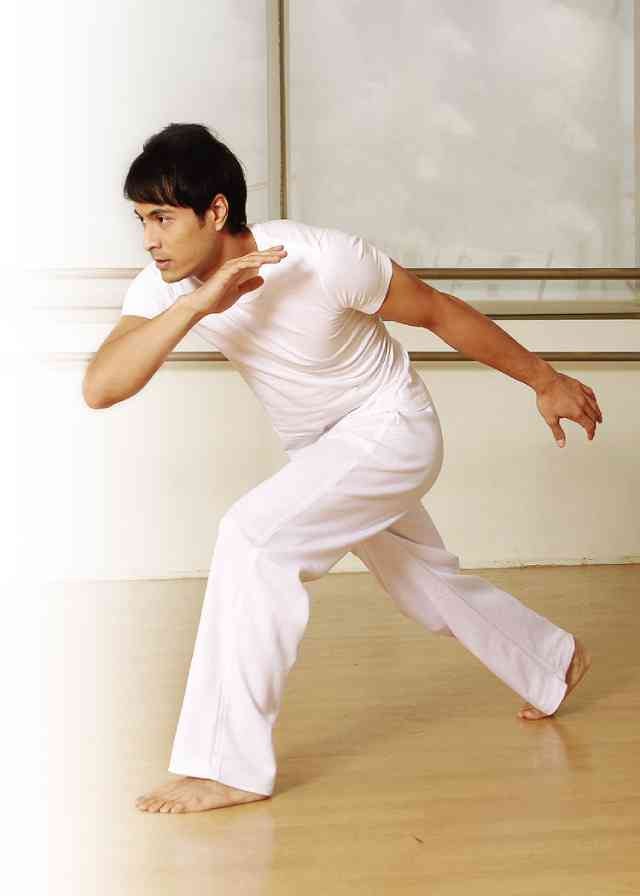 Three years ago, model-actor Rafael Rosell found himself in a light-bulb moment after catching a wave in a hidden surf spot in Zambales. As the sun cast a golden-orange haze, he was suddenly immersed in some intangible energy. The awareness of his environment, including his body, melted away.

It lasted for a few seconds but felt like an eternity. As this mystical experience seethed through his consciousness, Rosell became aware of an unexplainable presence which was strangely familiar yet sublime. In this encounter, he perceived a soundless voice telling him that he should redirect his life. He could never forget the euphoria that flowed into his spirit.

Rosell pointed out that since that unforgettable moment in the sea, spiritual growth has been a priority in his life. What transformed him was this awakening of the spirit.

Ironically, if you Google Rafael Rosell, you’ll be inundated by his beefcake photos and raunchy write-ups. He was heavier and, in some photographs taken three years ago, his face looked puffy. But after changing the course of his life through diet, meditation and keeping the company of like-minded souls, Rosell lost 38 lbs to reveal his sculpted cheekbones and lean, muscular frame.

When he demonstrated flips and cartwheels for Inquirer Lifestyle, he moved with the grace of a cat and landed on the floor with featherweight lightness.

Although the new lifestyle and body change gave him more enthusiasm for living, it also helped that he got into a new work environment when he signed up with GMA 7 after being a talent in another station for nearly a decade. With his long list of TV and movie credentials, he has added “Maghihintay Pa Rin,” an afternoon drama series about OFWs on GMA 7.

Rosell maintained that he separates his professional career from his personal life. He admitted that in the past, he would get caught up in his dramas, sometimes believing the illusions in the entertainment industry.

“With meditation, I could discern what is reality,” he said.

In the showbiz world of artifice and ego, it is not common to find someone like Rosell who has made the exploration of the spirit the forefront of his life. Still, he prefers to keep quiet about it. “I don’t impose (principles) on people. I prefer to live by example,” he said.

Growing up in Norway

Born and raised in Stavanger, Norway, Rosell grew up speaking Norwegian, his first language. His Bicolana mother and Cebuano father spoke to their children in English.

He grew up enjoying sports such as soccer, basketball, handball, karate and ninjutsu, a martial art form derived from samurai skills.

“The kids are different now. They’re into iPads, iPhones, PlayStations and TV. They are so engulfed in the prison of their home. They don’t play anymore,” said Rosell. “When I was young, I would play cops and robbers, hide-and-seek and Ninja Turtles. I would look for a playground to do sit-ups, cartwheels and Ninja stuff.”

He was barely 10 years old when he was exposed to meditation through karate and ninjutsu. “I thought keeping the mind still was a Japanese art of praying,” he recalled. Martial arts taught him the importance of spiritual refinement and the mental discipline required in the art and avoidance of combat.

Likewise, at 9 years old, he was already reading up on the Silva Mind Control, a self-development program which improves the brain’s functions and develops the human potential.

One day, a talent scout met the teenaged Rosell in Norway which led to his showbiz career. In a family vacation to the Philippines, he went to an audition, took a six-month workshop, starred in a Close-Up commercial and a slew of television programs and films.

After doing the movie “Bikini Open,” Rosell met the late manager Douglas Quijano who introduced him to the Bench team. This led him to be one of the Bench Body models.

Back then Rosell was pumping iron, tackling Muay Thai and kickboxing, and guzzling protein shakes, creatine and supplements for bulk. “I don’t know if they are good for you. Today, I try to take everything organic, as much as possible. I don’t even touch paracetamol,” he declared.

He found fulfillment in capoeira, a Brazilian martial art. “The music, the dance, the spiritual side, the singing and the magic were all there,” said Rosell. “Physically, capoeira is a whole body workout. The ginga (basic rocking movements) works on your butt and thighs. The cartwheels and handstands give you an upper body workout. Even the neck gets exercised when you do the headstand,” he said.

Rosell enjoyed the camaraderie in the roda or circle where capoeiristas start to sing, play instruments and dance. Then pairs enter the circle, play against each other by showing their skills.

“It looks like a dance but it’s a game of trickery. You have to trick your opponent to make him fall,” he explained. Rosell enjoyed his focus on the movements, the music and the partner.

“It makes you forget about everything, including your baggage. For me, to experience it was a total freedom; I could just be and not think about anything else.”

In the different capoeira schools, he was given a nickname which was also his attribute. His first moniker was Mansinho which means the “Gentle One” in Portuguese. Then another teacher named him Zorba, after the Greek god. Rosell added that, when his mentor saw him modeling underwear on a billboard, he associated Rosell with Zorba, an underwear brand in Brazil.

No longer affiliated with any capoeira academy, Rosell has no ranking. However, he continues his training through the Internet.

In 2009, Rosell underwent depression after a publicized breakup with his girlfriend from showbiz. It led him to binge-eating and drinking to buffer the pain of losing a loved one.

“I got so big that I became sluggish. I was into the whole club scene, partying, drinking every weekend, having steaks. It wasn’t until that surfing experience in Zambales that I realized it wasn’t the right thing to do. I needed to change. It was a calling,” he said.

Rosell shunned meat, pork and chicken, and favored organic produce. In six months, the 5’9” actor dropped from 188 to 150 lbs without feeling deprived.

“There was no effort nor frustration, just a change in lifestyle,” said the actor.

He could eat a Filipino breakfast of egg, fish and rice or an American breakfast of cereal with hemp or hazelnut milk. He has gotten into raw foods such as eating pasta made from zucchini.

“When you eat organic food, you don’t only feel full, you feel fulfilled. That feeling is so euphoric. Instead of being sluggish, you are so energized that you want to go on with the day and conquer the world,” he said.

His favorite restaurant is Corner Tree Café for its tasty vegan meals. In New York, he enjoyed the freshness of the French salads, baguettes and sandwiches in Pret a Manger (meaning “ready to eat”).

“I am not addicted to rice that I will miss it in my travels. In Norway, I grew up with sandwiches. I love sandwiches, just a simple combination of yeast, fish or vegetables and cheese. I also love romaine lettuce,” he said.

Rosell wondered if Filipino farmers and food manufacturers would put GMO (genetically modified organisms) labels on their products so that consumers would be given choices. When he was in Singapore, he saw chips with a GMO label and thought of posting it on Instagram.

His diet, which is largely plant-based, enables him to meditate. Previously, the meat and chicken made him feel heavy and difficult to focus.

Since that turning point, Rosell has been experiencing blessings—either moving experiences of the seascape (check out his Instagram photos of his surfing trips) or random encounters with inspiring people. He meets energy movers, people who are into alternative lifestyles or on the path to enlightenment.

“They say when the student is ready, the teacher appears. Each time I have a question, there’s always someone who comes up and I learn something new,” he said.

Upon arriving from New York, Rosell chanced on a friend, who was an energy mover-turned yoga and meditation teacher, at the airport baggage claim. He was eager to learn that she was teaching theta brainwaves meditation which is associated with creativity, self-programming and spiritual experiences.

With his work schedule, Rosell meditates thrice a day to recharge himself. He also applies the Silva Method to keep him alert especially on long taping hours.

Instead of hanging out in clubs, he prefers to study new things on the Internet, be it guitar-playing, meditation or reading up predictions on the future.

“If there is anything I would love to do, it’s learning and spreading positivity. But it has to start from within. I’m not going to tell people to behave like me. I hope that, someday, they would see the change and say, ‘Alright, let’s try that.’”