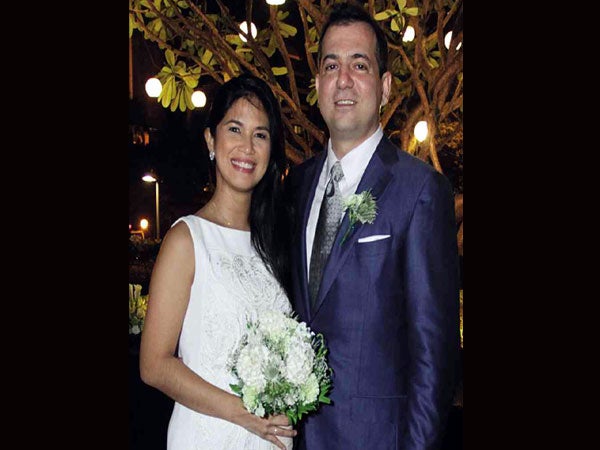 Trina Santos and Nikos Gitsis had been together for 12 years since neither of them were the “marrying kind.”

Famille and pals had been bugging them to get married for many years, but they would always just say, “We’d rather just keep going on honeymoons and skip the wedding part.” So they traveled extensively, said Trina.

Nikos proposed last January, but Trina completely sucked the romance out of his well-orchestrated proposal by not believing he was serious.

“I thought he was joking,” said Trina. “To the point that the waiters and staff at the restaurant ran out because they thought I wasn’t going to accept his proposal!”

Although Nikos had wanted a big wedding, she insisted on an intimate one, and after much arm-twisting he agreed.

They chose Sala Restaurant because aside from its great food, they had wanted a small and intimate area for the civil ceremony.

“We used the tree in the courtyard as the backdrop,” she said.

The catch was that it would be a “surprise” wedding ceremony. By surprise, they meant they would surprise kin and friends by inviting them ostensibly to Nikos’ “birthday dinner,” for indeed it would be his birthday the next day.

So after one hour of canapés and champagne in the courtyard, they all went inside the restaurant where Nikos clinked his glass and announced, “I am the happiest man tonight, because not only am I celebrating my birthday with all of you, but I am also marrying Trina tonight!”

And everyone broke out in surprise applause. All the invitees headed out into the courtyard again for the civil ceremony officiated by Supreme Court Justice Mariano del Castillo.

Her parents Rico and Elsa were there, of course, as well as sister Missy and brother Ral, and cousins Jackie Arellano-Tan and Stephanie Arellano-Figueroa.

The latter did Trina’s bouquet and all the flower arrangement.

Dinner consisted of imbale of tiger prawn and swimmer crab remoulade with cucumber, lemon and dill; and Portabella mushroom, ricotta and thyme ravioli with parmesan and truffle oil.

Afterward, Trina conceded to Nick wanting to invite more people by agreeing to have an “after-dinner-drinks” celebration at M Café, where their other relatives, friends, and Nikos’ business partners and longtime employees all came for his birthday salubong.

The birthday-cum-wedding bash got on a speed roller to the tunes DJ-ed by the newlyweds close friend, Mike Constantino.

Wow! That’s what a real lasting romance is all about, palanggas. N’est-ce pas?