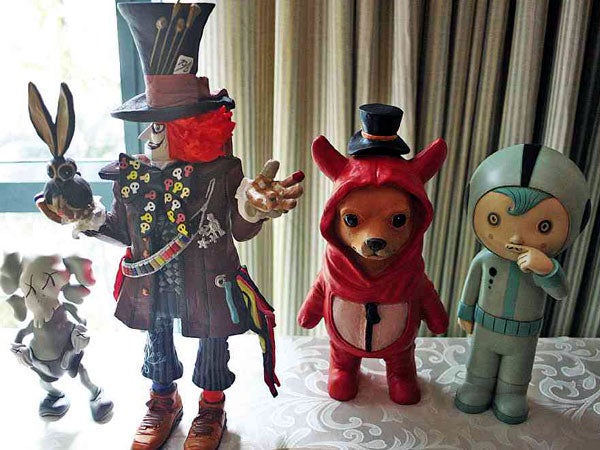 The three-day exhibit and sale of museum-quality Philippine arts and crafts (Aug. 23-25) is still over a month away, but the excitement at an exclusive briefing recently for MaARTe 2013 was palpable.

Several participants who had brought over some of their designs were fawned over by co-participants and organizers alike.

When this writer arrived at the venue, Armita B. Rufino, past president of the Museum Foundation of the Philippines, Inc. (MFPI) and one of the organizers of MaARTe was posing for pictures. Around her waist she had pinned a gray silk wrap slightly off-center, securing it with a vintage brooch. The components of her “neo Filipiniana” look were by Balay ni Atong’s Al Valenciano and Riqueza’s Erica Concepcion Reyes.

At one point, jewelry sculptor Tara Soriano gushed to Gaby de la Merced of Vinyl on Vinyl about how big a fan she was of the gallery and its contemporary art. All the women were drawn to the embroidery on the chic shirtdress worn by Amarie’s Anne Marie Saguil as well as the precise shades of banana leaf green on the beautifully hand-painted table runner and placemats from the label Art of Gold.

The most “inspected” collection that afternoon, however, came from Lyndon and Clarice Ecuacion, the husband and wife team behind Siklo. Using mainly the neoprene-like black inner tubes from different kinds of tires, they have created since 2011 a range of ladies’ bags, sling bags and pouches that are stylish, but more importantly, environment friendly.

The beginnings of the annual MaARTe fair can be traced back to 2009, when arts and crafts makers joined weavers in a symposium on traditional textiles. The two groups have since parted with the Philippine Textile Council now handling Habi.

The offshoot, dubbed MaARTe, is a three-day fair where buyers can choose from handmade items and get the chance to talk to the designers or creators. It fosters relationships between buyers and creators, and can even result in collaborations among the participants.

Maritess Pineda, MaARTe co-organizer, said that her decades of past experience in the export business helped her put together a preliminary list of exporters that merited exposure and were willing to sell to the local market. Apparently, not just anyone can join the MaARTe fair.

“You can use imported materials in your crafts, but they still have to be made by Filipino artisans,” she said.

Rufino narrated how one T-shirt vendor expressed interest to join but was denied a slot. “I asked her what she planned to sell, and she replied, ‘Mostly imported shirts.’ So I told her she couldn’t join,” she said.

Cedie Vargas, a third co-organizer, admitted that while the selection process might be seen as elitist, “We try to follow a few curatorial parameters.” To this end, the organizers make it a point to check what the participants will be selling at the fair even if the former already have a general idea.

Riqueza’s Concepcion is a regular participant at MaARTe but this year she will be selling one-of-a-kind jewelry pieces made of antique and new cameos as well as a selection of coral rings and earrings. She said that she has to wait for supplies before she can string over a dozen antique cameos into a bib-like neckpiece. The newer cameos, which are far easier to find, were combined with multi-strand pearls to create another neckpiece.

Soriano, who describes herself as a jewelry sculptor, will once again sell her brass cuffs as well as a number of crosses and crucifixes. Together with her in-law, Raisa Vargas, they will also carry an assortment of clutches under the label Tryst.

Saguil of the brand Amarie believes in developing relationships with her buyers as well as the Bulacan sewers who do the hand-guided machine embroidery on her tops and tunics. She describes the finished product as “preppie Filipiniana.”

“They’re so easy to wear. You can wear them on the beach as a cover-up. One of my regular clients pairs hers with white pants. It’s all very preppie,” Saguil said.

You might find the woman behind the Vinyl on Vinyl counter familiar, and you would be correct because she is racer Gaby de la Merced, a woman who also collects vinyl toys and records. At the gallery she shares with several partners, they have hosted exhibits featuring local and foreign designers of foot-high collectible resin toys.

For the fair, she and her team will sell art toys like variations on the Red Hoodie Doggie by Edwin Tres Reyes; one-off custom pieces by Rey Quino and Gabby Tiongson; and some functional art.

The number of participants that afternoon is only a fraction of the 50-plus the organizers expect, so block off Aug. 23-25 for MaARTe 2013 at the Rockwell Tent, Rockwell Center, Makati.