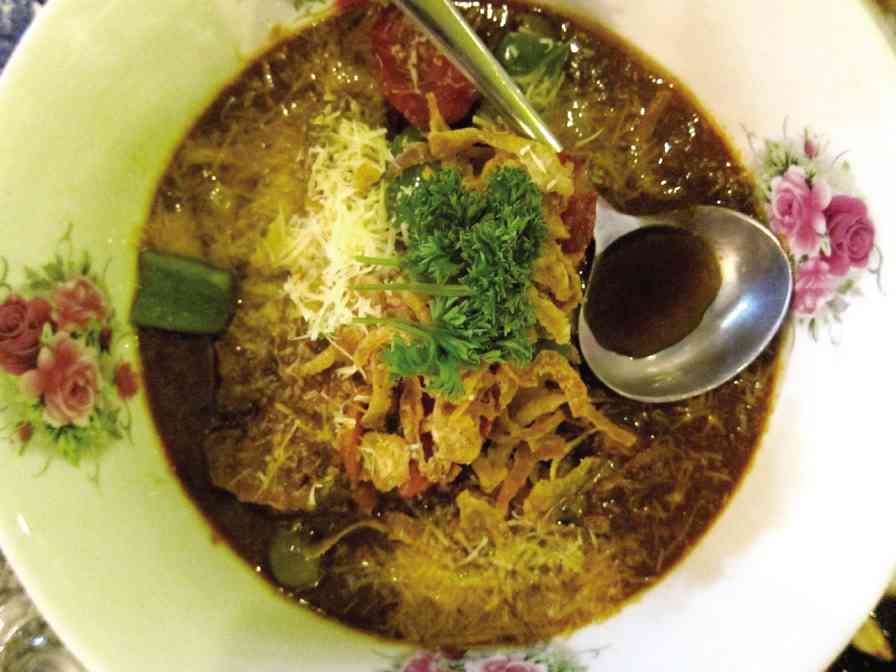 A restaurant need not be just a restaurant. It need not be a home only to good food but also to great memories. Its showcase need not only be culinary but cultural as well.

This is the case with Adarna Restaurant on Kalayaan Avenue in Quezon City.

Its signage says: “Food and Culture.” I had always surmised that it was because of the ambiance. The restaurant gives a feel of an old Filipino home, with wood re-purposed from old houses in the provinces.

Toward the main dining hall one will pass an anteroom that has a “sari-sari store” complete with candies associated with one’s childhood, such as Chocnut.

There is a piano in the middle of the dining room that is over 100 years old. On display is a copy of Rizal’s “Noli Me Tangere” in its original Spanish edition.

Old movie posters are in the function rooms, and art by Gilda Cordero-Fernando is on display on the walls.

But the owners, socialist Beth Angsioco and chef Ginny Villar, take “culture” beyond the display.

When I dropped by the resto, I was invited to a tertulia. “A what?” I asked. Villar explained: “A tertulia is a get-together common during the 1800-1900s. People congregate in someone’s house for food and to entertain themselves. There is singing, poetry, perhaps a little dancing. Mostly, convo revolves around art and culture. Adarna has been hosting tertulia since 2008. We set a theme and ask people to come over, no joining fee. People just pay for what they order. Then we ask them to volunteer to perform.”

Curiosity getting the better of me, I attended last June 29. And was blown away. Angsioco, in a pink Thumbelina-like Filipiniana number that she described as “modern-day Filipino woman” couture, introduced the participants of the program.

First were presentations by tour guides from all over. The representatives from the Women of Malolos Foundation acted out the story of Trinidad Pecson, “Ina ng Biak na Bato.” The

foundation president Vicente “Bong” Enriquez (call 0916-2534748 for tours), who is promoting Bulacan history and culture, also talked about the ensaymada Malolos and how it is on the verge of extinction unless the new generations learn to make this and other Bulacan delicacies.

Then, fashion designer Lito Perez (call 0927-9751683 for tours) talked about Batangas, with lawyer Ginger modeling one of his lovely terno for him. The Batangas tours also expose Batangueño cuisine to visitors. After this, Carlos Celdran gave a recitation of “Paco’s Dream.”

Beautiful poetry was recited by Miren Gonzalez Miranda, poet and fashion designer, and husband Christian. Then there was music. Yours truly (for real), with harpist/pianist Jane Banta on the piano, sang “Mutya ng Pasig” and “Bituing Mariquit” by Nicanor Abelardo. Followed by tenor Nomer Madridejo.

It felt like a time warp, really. Like we were given a peek into what life would be like in the 1900s. Even the grandchildren of Rizal were in the room!

The menu was, of course, Filipino. Dishes that the restaurant serves on a regular day: humba, kaldereta, pork adobo. All served straight-up Pinoy-style but in nice plates. These three dishes I mentioned are on the strong side of flavoring, but here’s what I said about the chef’s affair with anything using coconut in my review of Adarna a few years back: “…the chef is fantastic with anything that involves coconut. The Chicken Mole Soup is amazing. It is described in the menu as ‘a dish reminiscent of our Southeast Asian heritage,’ and it delivers on this promise. The taste of the coconut makes the soup refreshing and full yet not too filling that it would discourage you from ordering heaping servings for the rest of the meal. The Sinanglay na Tilapia is very pleasant as well. The tilapia is wrapped in pechay and served lying on coconut milk. But the best among the coconut-based dishes is the Piaasok. The beef chunks of this Sulu dish are  ‘slowly (cooked) in smoked coconut cream and 10 spices till tender, buttered, grilled and sliced just before serving,’ says the menu. The result is very, very flavorful, and very, very soft beef. I guess the coconut cream balances out the other spices, so while other dishes at Adarna come off as too strong, the Piaasok’s flavoring turns out perfect.” (Menu, Sunday Inquirer Magazine, August 2009)

Starting this July, the restaurant will have piano nights to promote Filipino music. And it is hoped chef Ginny will study how to keep old recipes alive as well. Especially the Malolos Empanada de Kaliskis (the crust gives a kaliskis or fin-like effect) from an 1820 recipe of some of the Women of Malolos themselves.

The tertulia was such a beautiful way to recapture and celebrate our heritage. And this is what I love about this restaurant Adarna. It’s not just about the food. It’s a celebration of who we are.

For more about the tertulia and food tours, visit www.margauxlicious.com.