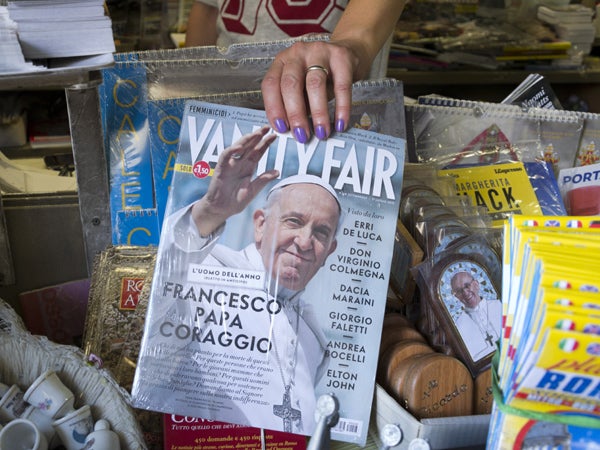 A woman shows the cover of the Italian edition of Vanity Fair magazine, which named Pope Francis it "Man of the Year" for 2013, on sale in her newspaper kiosk in downtown Rome, Wednesday, July 10, 2013. AP PHOTO/MICHELE BARBERO

ROME—Vanity Fair in Italy on Wednesday named Pope Francis its “Man of the Year,” saying the pontiff’s first 100 days at the Vatican had already made him one of the world’s top leaders.

Splashing on its front page a picture of the 76-year-old in his simple white robes, the magazine said his words and actions were “heavier than boulders.”

“The first 100 days of his pontificate have already propelled him to the top of the list of world leaders who are making history,” said Vanity Fair Italy, adding: “The revolution continues.”

John said Francis was “a miracle of humility in an age of vanity.”

“I hope he manages to get his message even further, to the most marginalized in society, to those communities which … desperately need his love. I am thinking for example of homosexuals,” added the openly gay pop icon.

For his part, Bocelli said: “Pope Francis is truly a gift from God to his Church which has been tortured and crushed by the forces of evil.”