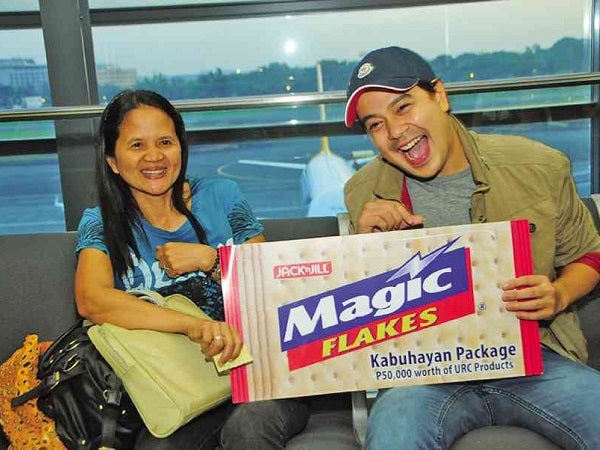 John Lloyd Cruz is out to surprise unsuspecting ‘victims’

Better watch out, John Lloyd Cruz fans. Your favorite movie star could be planning to have a “magic” moment with you.

Thanks to a new campaign by Magic Flakes and Universal Robina Corporation, John Lloyd Cruz will be visiting randomly preselected people all over Metro Manila and surprising them with gifts. There’s no telling who he’ll be surprising, or how, when and where it will happen.

“That basically is what the campaign is all about: Bringing magic to the people and making a real impact,” said Chris Alexy T. Fernandez, URC marketing director for Bakery Business Unit, Branded Consumer Food Group, at the campaign’s recent launch in Crowne Plaza, Ortigas.

John Lloyd’s first lucky “victim” was Malou Alicaway, an OFW waiting in NAIA for her flight to Hong Kong. He had sat beside her in the predeparture area. At first, Malou looked annoyed that someone chose to sit so close to her—until she realized it was the famous actor, who was hiding his face under a baseball cap.

After a few minutes of chatting, John Lloyd revealed to Malou that he wasn’t just there to talk—he was there to give her a “Kabuhayan Package,” or P50,000 worth of URC products. The entire scenario was caught on video, and will soon be uploaded online. (One of our own writers had a “magic moment” with John Lloyd at the campaign launch—See sidebar.)

It was later revealed that the Kabuhayan Package, which Malou left with her family here, helped revive their sari-sari store business.

“It’s a privilege that we celebrities have the chance to make someone’s day special,” said John Lloyd. “And it’s a two-way thing—sometimes, napapaiyak din kami.”

The next Magic surprises, which will happen in the next few months, will all be recorded and uploaded online through social media sites. Fernandez says they hope to make these videos go viral.

And we can definitely count on John Lloyd—“who embodies the essence of magic,” says Fernandez—to be there for every moment.