Wadowice and Auschwitz: From the tranquil to the appalling | Inquirer Lifestyle ❮ ❯ 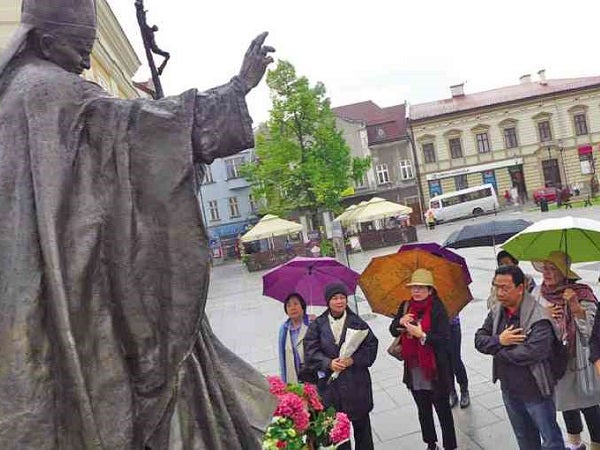 Pilgrims pray and offer flowers in front of the statue of Pope John Paul II.

Wadowice and Auschwitz: From the tranquil to the appalling

Whenever we think of Poland, we remember Blessed John Paul II and his “blockbuster” visits to the Philippines in 1981 and 1995. So we were filled with excitement when our Journeys of Faith pilgrim group set out to visit Wadowice—the beloved pontiff’s birthplace in Poland. The town has since become more significant after Pope Francis approved recently a decree declaring John Paul II a saint.

It is said that during his papacy, John Paul II would try to squeeze in a trip to Wadowice whenever he’s in Poland. He was born here in 1920 and stayed until 1938 before he moved to Krakow for college.

As our bus entered Wadowice, after a visual buffet of rolling mountain ranges, I completely understood why John Paul II loved Wadowice. The placed evoked tranquility.

After the obligatory trip to the WC (toilet) and a 10-minute walk in drizzling and chilly, 8-degree weather, our group reached the baroque Church of the Presentation of the Blessed Virgin Mary where the young Karol Wojtyla was baptized, received his first holy communion and had his confirmation. It was also here where he was an altar server. Led by our pilgrimage chaplain, Fr. Bong Tupino, we offered prayers and flowers at the image of John Paul II in front of the church.

We celebrated the Eucharist at a side altar and proceeded with a short tour around the church, where we saw several mementos of John Paul II. There were hundreds of rosaries hanging from the arches around the chapels, a clear indication of the town and the Pope’s devotion to the Virgin Mary.

It was particularly heartwarming to kiss the cross that John Paul II kissed; pray beside the baptismal font where his infant forehead first received holy oil; and kneel in front of the image of the Mother of Perpetual Help where he prayed as a young priest. Our group felt a warm glow when we saw the inscription of the years he visited the Philippines etched near his statue.

His family home at 7 Koscielna Street was undergoing renovation (perhaps in anticipation of the influx of visitors with his coming canonization), so we visited the temporary exhibition in the Catholic house on the other side of the church. Here, we felt an even stronger connection to him as we viewed his family pictures and personal belongings, including his crib and vestments.

Upon the recommendation of our guide Luigi Onglao and Fr. Bong, we had lunch at a nearby restaurant, savored fish and chips Polish style, and tasted the local Cremowa, a wafer-like cream cake said to be his favorite.

It was an uplifting experience to retrace the footsteps and see the birthplace of a blessed man.

We left this serene setting to proceed to our next destination, the Auschwitz Birkenau concentration camp—the largest death camp from 1940-45 where more than a million people were deported and some 900,000 Jews were exterminated.

Our tour guide Dorothy was grim-faced for most of the tour as she led us through block after block, cell after cell, narrating one atrocious story after another. It was heartbreaking to see things the prisoners left behind—tons of stacked luggage, shoes, crutches, wheelchairs, even hair that were not fit to be recycled into wigs.

It was unthinkable that the camp’s commandant, Rudolf Höss lived with his children in an idyllic house right across the gas chambers where people, mostly the elderly, sick, women and children were exterminated. It was mind-boggling to see stacks of empty cans of the cyanide-based pesticide used to annihilate almost a million Jews. It was shocking to see pictures of naked children upon whom the genocide experiments were done.

It was heartrending to see pictures of mothers and children being torn apart and endless rows of photos of prisoners with numbers tattooed on their skin. And it was a chilling yet purifying experience to mouth a prayer inside the cold walls of Cell #18 of Block 11 where Saint Maximilian Kolbe was executed.

The two hours spent walking around Auschwitz makes one’s chest want to explode with shame and outrage at the sheer inhumanity of the atrocities committed.

One pilgrim remarked, “This is definitely the saddest day of my life.” Midway through the tour, our feet were getting laggard. We didn’t know if it was physical exhaustion, or the realization of the atrocities that was affecting us.

After going around Auschwitz I where the Nazis “weeded out” those that were to be executed immediately, some elderly pilgrims decided to skip Auschwitz II which showed the appalling conditions of the “lucky” ones or those who were allowed to live.

We couldn’t blame them. It was staggering to see wooden bunks in makeshift quarters that could accommodate 50 horses, but were converted to hold at least 400 men who where crammed to endure extreme weather conditions. Rows of toilet holes sat beside the bunks. A thoughtful silence enveloped our bus as we left Auschwitz.

Wadowice and Auschwitz. From the tranquil to the appalling. From the highs of hope to the lows of despair. Two extremely contrasting destinations in a day.

Wadowice warmed our hearts with the vibrant and nurturing presence of John Paul II. Auschwitz, on the other hand, sent chills down our spine with its stark manifestations of man’s inhumanity and why it should never happen again.

As we rode the bus back to our luxurious accommodations in Hotel Angelo in Katowice, we pondered on George Santayana’s quote that greeted us during the first part of the Auschwitz tour: “The one that does not remember history is bound to live through it again.”

Journeys of Faith will have more pilgrimages to Eastern Europe and Marian lands up to the canonization of John Paul II this year. It also has more trips to the Holy Land, including one that features Christmas in Bethlehem. Call 9290144, 9290155, 4260601 or email [email protected]