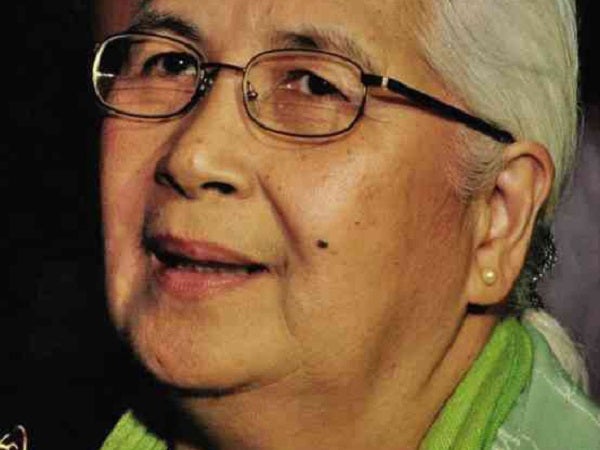 “Direk, just tell me what you want me to do, ha. Huwag lang mahihiya— 65 na ako but I really want to learn pa! Acting is a continuous process of learning, di ba?”

It was Ama Quiambao speaking. Humbled, I told her, “Ako rin po, I really want to learn with you. Don’t call me lang po direk! Haha!”

I feel privileged to have shared the last three weeks of veteran actress Ama Quiambao’s life with her, rehearsing a play for this year’s Virgin Labfest that was supposed to be her “return of the comeback” onstage—but which eventually turned out to be her last.

I first met her in Silangan Hall at the Cultural Center of the Philippines for our first reading of Det Neri’s “Pamamanhikan.” Tita Ama arrived 30 minutes earlier than call time. I did a curtsy and introduced myself: “Fans niyo po ako! ‘Sa Minsan Minahal Kita’ cameo ninyo. May pocketbook po ako nun.”

I was referring to the Sharon-Richard flick where she did a one-minute appearance playing the role of a battered woman at the funeral of her husband. We both laughed and we started our journey into “Pamamanhikan.”

Tita Ama offered her “widow’s pad” in Project 4 for rehearsals for us to save on transportation money; we were all from Quezon City, while CCP, the Labfest’s venue, was miles away. On afternoons that we spent rehearsing there, she would prepare 3-in-1 coffee and crackers for everyone. We, meanwhile, brought vegetarian food for Tita Ama.

We shared a lot of funny stories about Philippine theater, when Gantimpala was still at the CCP and Peta in Fort Santiago. Tita Ama (who came from Gantimpala) and her co-actress, Tita Carme Sanchez (from Peta), endlessly recounted anecdotes from their younger years—about actors joining different productions, jumping from one play, one company or even one lover to another; about various directors with their own signature temperaments; about the bohemians or “free spirits” of local theater.

I came in early one such afternoon and caught Tita Ama rehearsing her lines while waiting for everybody to arrive. I sat down and told her I came from a TV soap taping, where I worked as an acting coach. Concerned that I was very busy, she reminded me to take care of my health. I explained to her that I was managing an independent theater company, the Sipat Lawin Ensemble, and for me to address the issue of sustainability, I had to do different meetings in the morning, rehearse in the afternoon and do a different production at night, TV work aside, in order to sustain my practice and that of the company’s.

She was so excited about Sipat, and asked if she could involve her students as on-the-job trainees in the ensemble. Tita Ama had a heart for her students; teaching kids who are interested in learning theater despite having no means to pursue it always put her on a “high,” she said.

She wanted to make theater more accessible to these children. A theater advocate, she revealed how disheartened she was that the theater program in the university where she taught would soon be dissolved because of its lack of “business potential.” And so she was bent on developing a theater course for the school’s education program, concerned not only for the students but also for her co-teachers who would soon lose their jobs. She wanted more people, especially those less privileged, to enjoy theater. We shared the same vision.

Tita Ama was especially disapproving of fly-by-night theater companies that, in her view, didn’t have high regard for the craft, that merely saw theater as a money-making venture. She said some companies would pack auditoriums or gymnasiums with thousands of audiences who were allowed to eat inside and be rowdy while watching, if they watched at all. The company didn’t care that the performance suffered because of sheer scale.

In the provinces, she said, many shows are treated like businesses, and it saddened her that that was what people got to see. “Bilisan niyo, JK! Dapat makarating kayo sa mga probi-probinsya!” she told me.

We loved talking about empathy, and how it is important in one’s craft as an actor. Tita Ama said she didn’t really have any acting technique, but she always found it important to empathize with the character and empathize with the people around her. Actors, she said, should treat themselves as an “empty vessel,” their bodies as having the capacity to change and becoming a blank canvas of endless possibilities.

At 65, she still wanted to learn; she saw life, like acting, as a continuous act and a continuous process of learning.

Tita Ama, however brilliant, remained a hardworking and modest actress. So hardworking that she, along with Tita Carme, insisted on rehearsing every day instead of every other day, from 1 p.m. until evening. She was so modest that she didn’t want to bother anyone; whenever we treated her and Tita Carme to restaurants, she’d start her “Baka pwedeng makatipid naman” spiel, but I would insist, because I wanted to treat them like they were my “lola girlfriends.”

She was so humble that she would apologize for lines she had not memorized. I would always remember that moment when I sent her and Tita Carme a sentimental text message after a particularly shaky rehearsal. I told them things were going to be fine, and that I was excited about the good that was to come from our work.

Theater was her sanctuary. Tita Ama giggled and was clearly happy when I told her how four theater students of mine came out of the closet last summer, with theater having become a safe space for them. It was her haven, too, she said. She had always thought of herself as different and weird, especially when she was still working as a librarian, and the theater was where she learned to express herself, explode and do whatever she wanted to do.

On performance day, she was very excited. A really disciplined actress, she had the index cards with her, where she wrote all her lines. Once again, she would be onstage in Tanghalang Huseng Batute where she used to perform with Bulwagang Gantimpala.

Before the performance, she asked if we could pray together at the CCP Prayer Room, which we did. For the first time, I saw her bun of silver hair untangled. Her hair was down during the performance. We were in awe—she was so beautiful.

She and Tita Carme were doing so well. At the height of a really funny scene where you could see both of them enjoying, laughing and doing ad-libs onstage (their way of buying time as they tried to remember their lines)—with the audience laughing along—she suddenly said, “Teka muna, nahihilo ako.”

And, as modest as she was, she slowly kneeled and carefully positioned herself lying down, as if it was part of the performance. Like it was a graceful act, a graceful exit, for a generous, graceful woman.

I think that, even then, she didn’t want to bother anyone. And she still wanted to end her performance on a high note.

Tita Ama’s modesty and generosity, her passion for learning, and her love for theater will forever be in our hearts. Her life’s work will always be seen as that of overflowing determination, dedication and discipline for one’s craft and passion.