Savoring the ‘real taste’ of beef at The Strip | Inquirer Lifestyle ❮ ❯ 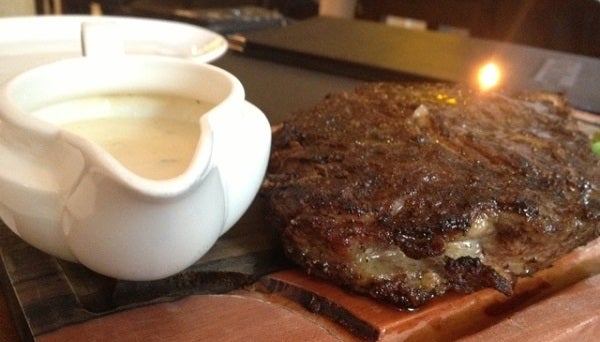 Savoring the ‘real taste’ of beef at The Strip

MANILA, Philippines – Stripped to the “bare essentials” is how Chef Peter Ayson wants his steaks. And this is how he wants them served to his customers at The Strip Hollywood Steakhouse, which opened recently at the Edsa Shangri-la Plaza.

“We strip it to the bare essentials,” Ayson, The Strip’s executive chef, said in an interview with INQUIRER.net recently.

“What’s the basic steak? It’s really just salt and pepper. Don’t complicate it with anything else. I want [people] to taste the real beef,” said Ayson whose father is a Filipino and mother, a Spanish mestiza.

The beef is imported all the way from the United States and Japan, said Ayson who lived in Jakarta, Indonesia for 17 years before moving to Las Vegas and Chicago over the next six years. He has been in the Philippines since 2008.

Ayson said he made it a point to know the food the cows were fed with and how they were slaughtered.
Even after it is grilled from “600 to 700 degrees” or broiled “up to 2,500 degrees”, the meat remains rare on the inside, said Ayson.

He said once an order was placed, the meat would be cut using the hands to preserve its freshness.

He also said that each member of his kitchen staff was assigned specific tasks: “If you’re a butcher, you only cut meat. If you’re a cook, you only cook. They don’t touch anything else that is not assigned to them.”

“I’m very, very strict when it comes to steaks,” he said, adding that his staff went through rigorous training before being made part of his cooking team.

“You have to have it perfect,” said Ayson who admits to being “obsessive compulsive” when it comes to preparing and cooking his steaks.

The Strip offers, among others, the Porterhouse steak, the 21-ounce Certified Angus Beef Ribber served with Wild Rice Succotash, Asparagus with Garlic and Shallots, Almonds with Green Beans and Chilean Seabass.

“It’s still a modern steak house but . . . fresher, lighter. . . more reviving to compliment the steaks, rather than something heavy [that] you feel so bloated after . . . you feel so guilty,” Ayson said.

Family Steak Nights and BeFlexible are just some of the The Strip’s offerings in the coming days.

“We want to be a steak house in this area that has weekends for the family. . .  that’s why we have bigger tables,” he said

“Normally, people don’t like sharing their steaks . . . but here in Strip, it’s more for the family,” he said.

Meanwhile, in BeFlexible, guests can avail of a half-sized steak, with the other half replaced with any seafood dish for the same price.