Why Marichelle Ligon is the preferred wedding planner of Korina and Mar, Shalani and Roman | Lifestyle.INQ ❮ ❯ 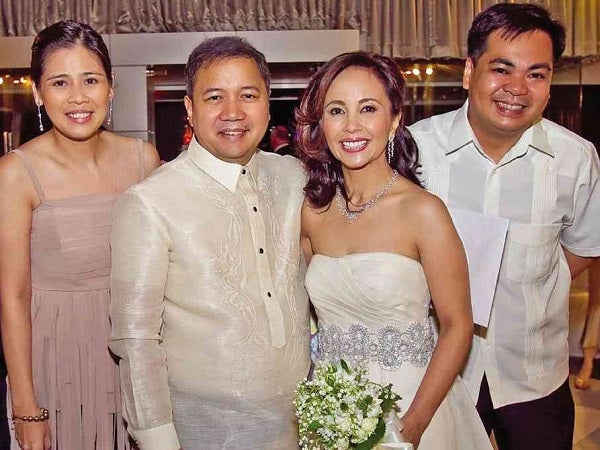 Why Marichelle Ligon is the preferred wedding planner of Korina and Mar, Shalani and Roman

A wedding, whether intimate or as extravagant as a barangay fiesta, is always a glamorous event. Everyone is dressed up, polished, beautiful.

Planning one, however, is anything but glamorous, says high-society wedding planner Marichelle Ligon. It’s real work—but work that she extremely enjoys.

“If anyone asks me what my passion is, it’s this, doing weddings,” she says. “Even if I’m sick, I have to go. It’s a commitment.”

It’s a commitment that’s lasted 20 years since she founded the events-planning company Bride’s Maids & Co. together with close friends in the early ’90s. It’s a commitment that has also rewarded her with a roster of A-list clients: Korina Sanchez and Mar Roxas, Shalani Soledad-Romulo and Roman Romulo, Audrey Tan-Zubiri and Miguel Zubiri, Kara Ponce-Enrile and Moulay Rhounimi, Danielle Tabuena and Juan Rodrigo Ponce Enrile, Ruffa Gutierrez and Ylmaz Bektas, among others.

Ligon is now manning her own wedding-planning company, Company of Brides, which she recently put up together with Joseph Vila (a colleague from Bride’s Maids & Co.). The decision to move came at a time when Ligon wanted more freedom with her planning choices, and working with longtime friends in her previous company was proving more a liability than an asset.

“Work-wise, it was hard to call their attention… it went that way for a while. It was becoming difficult [to work],” Ligon says. “We have so many plans, and now we no longer have to go through so many people and get their approval.”

Her new team offers whole-event and day-itself coordination services, reception- and church-service-only packages, as well as consultancy service. Ligon tries as much as possible to bring out the personality of each couple when she plans their Big Day.

“I never met Ruffa Gutierrez (when I planned her wedding). I only met her mother, who said,  ‘Marichelle, we’ll leave it up to you. We just want the wedding to be beautiful,’” recalls Ligon. “I based everything on what I saw on TV (about Ruffa), and I was so proud because everything was my idea, but still Ruffa’s personality. She loved it.”

Ligon paid attention to details: perfumes as souvenirs (“Since she’s kikay”); tassels on the packaging, representing Ylmaz’s Turkish nationality; and a colorful wedding cake instead of the traditional white, to mirror Ruffa’s “colorful life.”

She is also particular about one thing: etiquette.

“A wedding is one occasion that needs to follow certain etiquette. I always tell my clients, you only get married—supposedly—once in your life. Let’s do it right,” Ligon says.

For one, Ligon discourages themed, over-the-top, production-number types of weddings. Also, couples should never make their guests wait too long to eat. Yes, you want everyone to know your love story through a special AVP, and recap the ceremony’s highlights by playing a same-day-edit video, but good manners dictate that you prioritize the feeding of your guests.

There’s also the picture-taking: We’ve gotten so used to attending events wherein guests are only allowed to line up for the buffet only after having their photo taken with the bride and groom, who are sitting pretty onstage. Ligon says this practice is completely wrong.

“That’s a no-no. I know it’s convenient, but you don’t dictate on your guests,” she says. “Think of your wedding as a house party. As host, don’t you go around, check on your guests? It’s not the other way around.”

On the invitations, Ligon says couples should avoid writing that they’d rather “receive cash as gifts.” Even the common practice of placing the registry card together with the invite is a no-no, but Ligon says she lets that one slide since clients insist.

“It’s not just about coordinating a wedding,” she says. “You have to know etiquette, because you will be guiding your clients.”

Of course, despite her experience in the business, small glitches during the actual event can’t be avoided. One such incident involved butterflies, which the groom included as a surprise to his bride, to be released after the speeches.

“I picked up the butterflies that day. They were in a tall cage covered in black cloth. The supplier told me, ‘Remove the cloth one hour before you want them to fly, because they have to wake up. You be the one to estimate the time,’” Ligon recalls. “But I didn’t know the speeches would take two hours long, and the butterflies went to sleep again!”

Ligon’s assistant decided to take each butterfly in hand and let them go one by one, which thankfully woke them up. But it wasn’t over: A lot of the butterflies had landed on one of her partners who, unfortunately, is afraid of the insect.

“She couldn’t freak out because she was standing onstage near the couple. That was a really funny incident,” says Ligon.

Then there are the “bridezillas”—the worst was one who threw a tantrum during her own reception. Ligon says the bridezilla wasn’t really a trend when she was still starting in the business.

“I think it’s because there are so many options available now that they get carried away and want to do everything,” says Ligon. “We handle them by saying to ourselves that we just need to do our job. We don’t take it personally.”

“What’s more difficult are the brides who don’t know what they want; those who can’t decide on what should happen on their wedding.”

Just like any event coordinator, Ligon finds ultimate fulfillment in a wedding that goes perfectly according to plan. She found that when she took care of the wedding of Daniel Halpern and Christina Lewis, daughter of Loida Nicolas-Lewis, renowned philanthropist, businesswoman, lawyer and widow of the late African-American billionaire Reginald Lewis.

The reception for 400 guests took place at the gate of Fort Santiago, perfect for the Pinoy wedding Christina wanted. Making it even more special was the fact that it was the first wedding reception held at that venue; such events aren’t usually allowed.

Ligon was able to book the place, thanks to the influential Lewis name and their generous donation to renovate the landmark’s restrooms.

“It was nice for her to have the wedding there so that her guests could experience Intramuros,” says Ligon. She was even able to hire the traditional kalesa to transport people from church to reception.

“It’s a memorable wedding for me because it was like a dream, like we went back in time,” says Ligon. “And everything was in sync, from the fireworks, to the timing… everything was on time. [Christina] was so thankful; she said that even when they got back to the States, her friends couldn’t stop talking about the wedding.”

But there are also instances when Ligon goes beyond her role as wedding planner. Once she had to remedy a cake that had slightly melted because the baker had placed a candle inside it. At another wedding, she had to go against her client’s wishes and move a supposedly garden wedding indoors because the rain wouldn’t let up (the couple was extremely grateful).

And, sometimes, Ligon becomes so close to her clients that they even approach her about relationship problems.

“One client called me up, and told me about a huge crush she had in college whom she was always being set up with, but didn’t really date,” says Ligon. “When this guy found out that she was getting married, he suddenly began courting her.”

The client was so problematic about it because of her Chinese heritage. Her crush was Chinese, and her fiancé Filipino. Ligon simply told her: “Tell your fiancé the truth.”

Luckily, her client’s fiancé didn’t flare up; instead, he just asked her to choose. When the girl still didn’t know what to do, Ligon advised: “If you were to ask me, I’d choose your fiancé. You’re just feeling the thrill of finally being noticed by your crush, but you don’t know the guy. Unlike with your fiancé—you already know him, your family loves him, and he loves you. There are no more surprises.”

Ligon was happy to see the couple was still together—and their family growing—when she met them recently.

“It felt really good that my advice helped, and at such a critical point in their lives!” said Ligon. “That’s how we work; we do extra things that will help. We don’t stop at just planning and coordinating. They have to trust us for us to be able to do our job.”