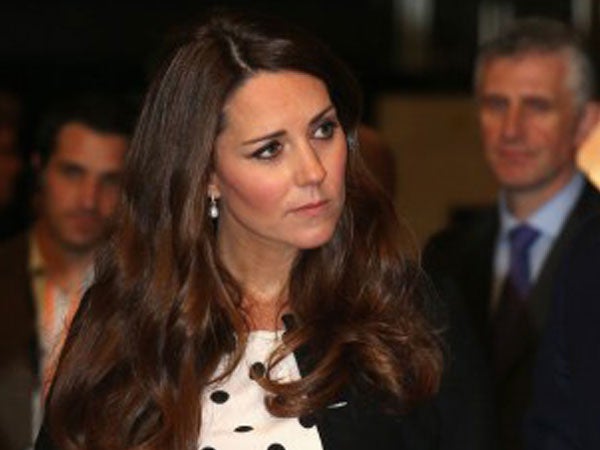 LONDON — The Duchess of Cambridge’s pregnancy has seen her endure illness, media frenzies, bikini shot scandals and a prank that ultimately ended in tragedy.

The news that Prince William’s wife Catherine was expecting a baby was released on December 3, after she was taken to hospital suffering from acute morning sickness.

Three days earlier, Kate had shown no sign of discomfort as she played hockey on a visit to one of her former schools.

The new arrival will be directly in line to inherit the British throne after William, who is second-in-line after his father Prince Charles.

But joy at the news of a baby tinged with concern for the duchess’s condition, soon turned to anger and then tragedy.

During her three-night stay at King Edward VII’s Hospital in London, a hoax phonecall made by two Australian radio presenters — pretending to be Queen Elizabeth II and William’s father Prince Charles — resulted in details of Kate’s condition being divulged.

The stunt, by Michael Christian and Mel Greig, triggered a global media storm of its own and sparked a backlash against the presenters and the radio network.

Jacintha Saldanha, the Indian nurse who answered and put through the call, was found hanged on December 7, having taken her own life.

William and Kate were left “deeply saddened” by her death, a spokesman said.

England’s state prosecutors eventually decided not to bring any charges against the radio hosts, saying that “however misguided, the telephone call was intended as a harmless prank.”

But in February, pictures of the Duke and Duchess of Cambridge holidaying on the Caribbean island of Mustique were printed in Italian and Australian publications, showing Kate in a bikini, her baby bump clearly visible.

Infuriated, St. James’s Palace called it a “clear breach of the couple’s right to privacy.” It came after topless pictures of the duchess had been published the previous September, incensing the royals.

Britain’s media got themselves into a frenzy in early March, believing Kate had accidentally given away the sex of their baby while meeting members of the public on a visit to a fishing town.

However, recordings of the exchange revealed nothing of the sort.

“Is this for us? Oh, thank-you so much, it’s very, very sweet of you,” she said as she was handed a teddy bear.

“Did you nearly say my daughter?” a 67-year-old woman a few metres away asked shortly afterwards.

But the molecule of confusion was enough to get the papers all in a lather.

“Obviously, Will’s grown up in it, but Kate’s become very used to that kind of circus,” said Claire Irvin, editor-in-chief of Mother and Baby magazine.

The duchess carried out her final solo public engagement on June 13, launching a new liner in the southern English port of Southampton, sending a 15-litre bottle of champagne smashing into its hull.

On June 19, palace sources gave the first confirmed details about the birth.

Kate hopes to give birth by natural delivery and the baby’s sex will remain a mystery until it arrives.

The baby, due any day now, will be born in the private Lindo wing of St. Mary’s Hospital in Paddington, central London, where William himself was born to Prince Charles and princess Diana.

The birth will be overseen by Dr. Alan Farthing, the queen’s gynecologist, and his predecessor Marcus Setchell.

While the monarchy is on Twitter, the birth will be announced to the world in the traditional method — a notice on an easel in the Buckingham Palace forecourt.

Since then, media organizations have been stationed outside the hospital wing, their territory marked out on the pavement waiting for Kate to enter.

The palace has refused to give a running commentary, meaning the final days of the world’s most scrutinized pregnancy have been played out in private.

William was away from home playing a charity polo match on Saturday, but that has not stopped bookmakers from shortening the odds on a birth Sunday to 4/1.