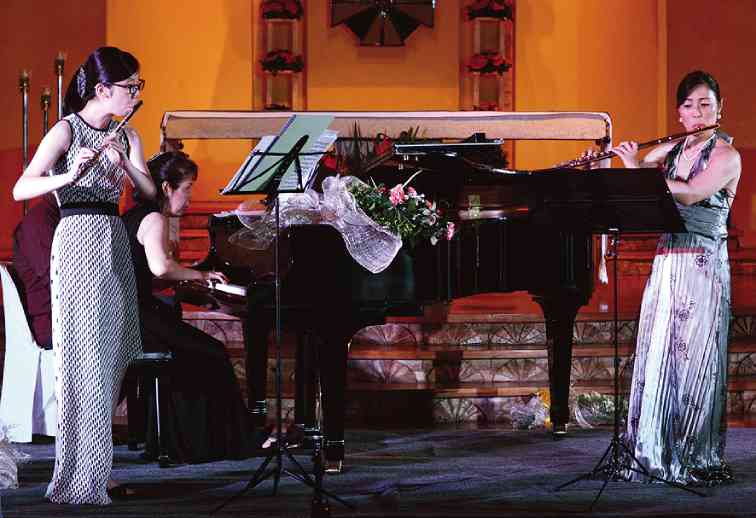 Enomoto is one of Caitlin’s mentors for the last five years, and, of course, the pianist is her proud mother.

The concert has truly enriched the performing arts, considering  an entire program dedicated to flute music is rarely staged.

The program is devoted entirely to flute music written in contrasting styles. Listeners came in droves and filled up the venue, the Chapel of the Forgiving Lord in Alabang, Muntinlupa, whose serene, intimate ambiance is perfect for the appreciation of chamber-music concert.

Sponsored by the Rotary Club of Alabang, the concert was supported by Prudential Guarantee in celebration of the 90th birth year of its founding chair, Robert Coyiuto.

Tuloy Foundation, Inc. was the concert’s beneficiary. Its founder, Fr. Rocky Evangelista, welcomed and informed the audience the artists were performing gratis et amore. He  said the concert was the first performance ever mounted in the chapel.

The Novo Concertane choir, conducted by its founding choirmaster, Arwin Tan, rendered Salmo 23 for Solo Flute and Choir, a new composition by Ralph Hoffman (b.1969). The world-premiere of the piece served as a doxology, a prayerful homage to the late taipan and as prayerful preface to the concert.

The late honoree’s granddaughter Caitlin  played the flute part of the new composition.

The composer said the work reflected the taipan’s legacy: a call for people to rise above life’s turmoil; and a note of hope to overcome it with the grace of God.

Cristine  matched the flutist’s eloquence. Her tones were relaxed and elegant, her dynamics strikingly nuanced, and her lines legate and singing.

Together they forged a striking tandem.

Noticeable was the “breathy sound” that made the flute sound “guttural,” and the dark, earthy sounds that  brought out the dirge-like character of the piece. No doubt the piece was played in honor of the memory of Robert Coyiuto.

In Reinecke’s popular “Undine,” the flutist portrayed the diverse emotions   expressed in passionate colors, evoking a dashing romantic appeal. She delivered the piece consisting of four movements with elegant dispatch, holding  the audience captive throughout.

Cristine and Caitlin teamed up in Bohuslav Martinu’s First Sonata, H. 306. Mother and daughter struck a solid duo. Caitlin cut a confident stance and displayed command and surged with a broad sweep the three contrasting movements that made up the entire piece.

Here the two engaged in a wholesome dialogue throughout. Their conversation was eloquently displayed in sparkling melodic as well as rhythmic repartee which had its high point in the third movement, where the composer used the call of a bird as a motif, ending in a rapid rhythmic drive in the high register for both instruments.

In the next piece, Philippe Gaubert’s Nocturne et Allegro Scherzando. mother and daughter all the more forged a tight rapport and played with gusto. They rhapsodized the impressionistic import of the nocturne part and the playful romance of the scherzando with burning passion.

Kept in the same tonal mold as her mentor’s, Caitlin charmed the audience with her eloquence. Playing in a relaxed manner, she etched solid and singing tones, whose elegance mesmerized the listeners. Musicality reigned supreme. And the confidence she cut all pointed out to an evolving bright musical career.

A freshman in Wellesley College in Massachusets, US, she pursues her flute study with Kathy Boyd and Linda Toote with equal passion.

The flutists struck a marvelous duo in Mozart’s Sonata in D Major, K. 448. Here they stood on equal footing, as both impressively cut a virtuoso stance and absorbing musicality.  The duo absolutely was impressive, forging a unity of approach and cutting similar debonair tonal production.

The flutists changed gear in the succeeding piece, Doppler’s Duettino Americain, and had fun rhapsodizing familiar American tunes culled from the “Star Spangled Banner” itself and “Yankee Doodle.”

The audience asked for more at the end, and the trio obligingly gave three encores: Delibes’ “Flower Duet”; Damare’s “Le Moineau Parisiene,” for piccolo and piano, played by the Japanese flutist; and Bernstein’s “Tonight,” all to the delight of the audience.