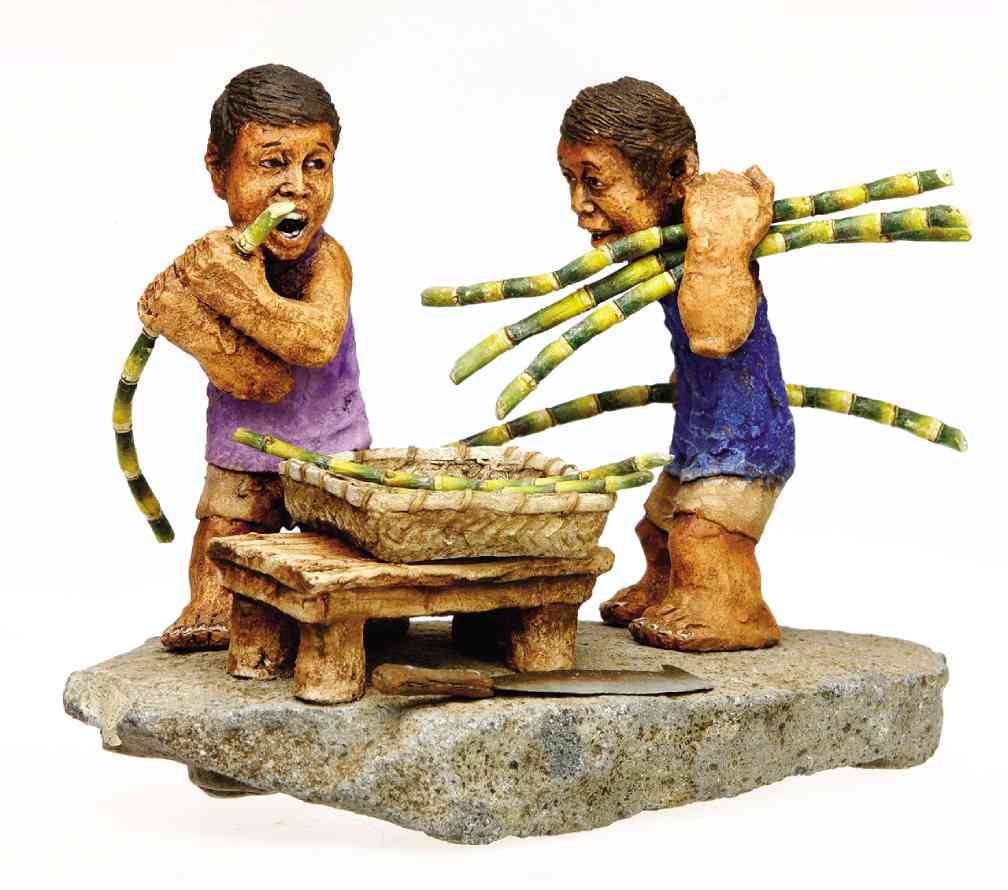 Sarnate’s sculptures evoke nostalgia for an innocent and wholesome past—when dragonflies in the field could summon amazement and flying a newspaper kite was a thrill.

Sarnate describes his pieces as memories and dreams of his childhood in his hometown, La Carlota.

His material, terra cotta, symbolizes land and home that are both history and a quickly gentrifying present.  Sarnate says: “It is a journey back to the time when children perceived freedom as free access to food; the time when foraging naturally grown food promised a healthful living for the old folks. But the former fields have been slowly replaced by mushrooming housing projects, and the uncultivated plants can hardly survive on paved roads even in the provinces.”

Tijing continues this thread, showing in his own visual style the pervasive power of capitalism and consumerism; that capitalism’s very language is the same measure with which we describe our lives.

He comments: “It is like corporations raise our children and control our nations and schools, teaching us how to think. We are bombarded with ads on TV, billboards, taxis, buses…”

Thus, Tijing’s images are of suits at podium preaching to the flock below; burly men on horses with prisoners in tow; or mustachioed octopus men holding every imaginable product in each tentacle.

Sarnate is a potter and sculptor. He was the winner in the 2007 International Biennale Terra-cotta Festival Exhibition and Competition in Silliman University, Dumaguete City, and the Grand Prize winner in the Pasalamat Festival in 2001. In 2003, his works were declared as the best entries in Panaad sa Negros.

Tijing was nominated for the Cultural Center of the Philippines’ Thirteen Artists Award in 2012. He  was a semifinalist in the 2010 Metrobank Art and Design Excellence (MADE) National Painting Competition.

Both are based in Negros Occidental.