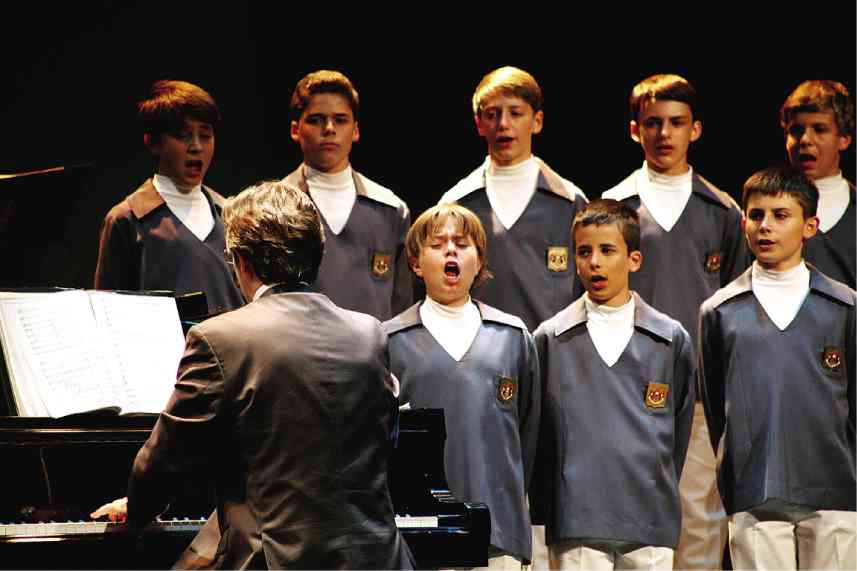 The Little Singers of Monaco wowed the audience in their recent performance at the Far Eastern University Auditorium.

They did the same for the rest of their Manila tour, with performances at SM North Edsa on July 12; Greenbelt 5, July 13; and SM Mall of Asia, July 14.

Presented by the FEU President’s Committee on Culture, the concert last July 9 kicked off the celebrated boys choir’s Philippine debut The Philippine tour was part of the Singers’ 2013 Asian tour.

The honorary consul general of Monaco to the Philippines, Fortune Ledesma, welcomed the audience and briefly introduced the “Monaco Boys Choir.” She said  the children choir was under the royal patronage of Prince Albert of Monaco and  dubbed “Little Ambassadors.” The group was formed in 1974 and has performed in several countries.

Conducted by Pierre Debat, the children’s choir showed its versatility as it sang pieces written in varied styles sans  intermission.

The program consisted of religious pieces from the Baroque period; secular songs from the Romantic; a contemporary Mass; folks songs from Monaco; and French popular songs.

Consisting of 28 singers whose ages range from 10-18 years old, the choir cut a courtly presence with the conductor cueing them from the piano  on the center, cutting the choir into symmetrical parts.

The decorum was admirable: The singers stood attentively in choral formation.

The projection of still photos, and the title of the songs the children were rendering enhanced the appreciation of the concert.

At once the singers got the audience’s attention. The voices were well blended, liberated and well projected. They hushed the audience into meditative listening in their prayerful rendition of mostly Baroque religious pieces penned by French composers such as Nicolas Bernier and Marc-Antoine Charpentier and German composers such as Johann Sebastian Bach and Felix Mendelssohn.

In appreciation of their fine singing, the audience applauded practically each rendition.

Debat warmly acknowledged the applause and cued the choir, and at times fetched the soloists to come down from the riser, to bow.

In Charpentier’s “Regina Coeli,” the boy soprano soloist brilliantly etched his part, and gained the admiration of the audience which gave him and the choir a robust applause.

In Bach’s aria “Bist du Bei Mir,” the singers showed their skill in  unison which brought out the texture of the song palpably. They showed this feat again in their warm rendition of Faure’s “En Priere.”

When the “Gloria” was done, the audience gave a hearty applause. The short interruption did not distract the choir’s spontaneity or sense of continuity in singing the other parts of the Mass, “Sanctus” and Agnus Dei.”

In the rendition of Monaco folk songs, the choir showed a different vocal production that brought out the folksy color of the songs. Vibrantly the choir sang, keeping up an animated rhythm.

The audience all the more applauded the singers in their rendition of French popular songs. Some of the listeners couldn’t help but hum with the singers through some songs they knew (popularized by romantic singer Edith Piaf), as in the opening “Sous le Ciel de Paris” (Under the Sky of Paris); “L’hymne a l’Amour” (If You Love Me, Really Love Me); “La Mer” (The Sea); and “Un homme et une femme” (A man and a Woman).

In his closing remarks, FEU culture head Martin Lopez informed the audience that the engagement of the Little Singers of Monaco, opened the cultural season of the university, aptly titled “Debuts and Farewells.”

Lopez cued the audience to loudly say “encore,” which prompted conductor Debat to reprise “Les Champs-Elysees,” the last number in the program that earned thunderous applause.