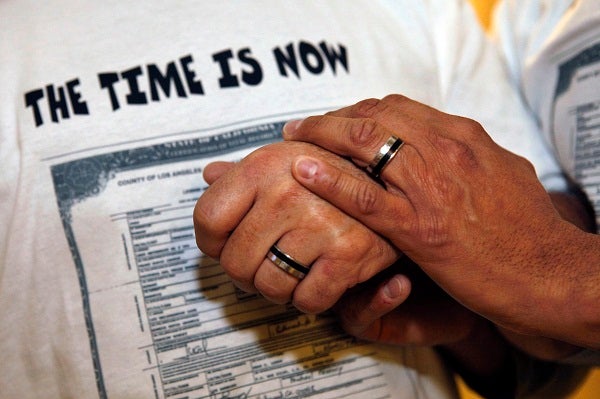 In Oct. 6, 2009, file photo, Ed Grandis, left, and Juan D. Rondon, hold hands after a bill allowing same-sex marriage in the District of Columbia was introduced at a city council meeting in Washington. On one aspect of whether same-sex couples should have the right to marry, both sides agree: The issue defines what kind of nation we are. Half a dozen states and the District of Columbia have made history by legalizing it, but its prohibited elsewhere, and 30 states have placed bans in their constitutions. (AP Photo/Jacquelyn Martin, File)

WELLINGTON—Air New Zealand announced plans Wednesday to stage the country’s first same-sex marriage at an altitude of 30,000 feet (9,150 meters), saying it wants to prove that love is truly in the air.

New Zealand passed a bill allowing gay marriage in April but it does not become law until August 19, when officials say they are expecting a slew of same-sex weddings.

Air New Zealand launched a competition Wednesday for those keen to be the first to tie the knot, saying the ceremony will be staged on an early morning flight from Queenstown to Auckland on August 19. The competition closes on July 26.

The airline said US actor Jesse Tyler Ferguson from TV show “Modern Family” would attend the high-flying nuptials with his partner Justin Mikita.

“Justin and I are thrilled to be taking part in witnessing this historic moment for New Zealand,” he said in a statement.

“After launching ‘Tie The Knot’, our bow tie campaign for marriage equality in the US, it is clear that the journey towards marriage, both in the US and beyond, means so much to us.”

Registrar-General of Births, Deaths and Marriages Jeff Montgomery has increased the number of marriage celebrants ahead of the deadline, extending the powers of 120 civil union celebrants so they can also perform weddings.

“We anticipate a strong level of demand from the same sex couples in New Zealand, and also from overseas, to get married, so it makes sense to increase the number of marriage celebrants,” he said.