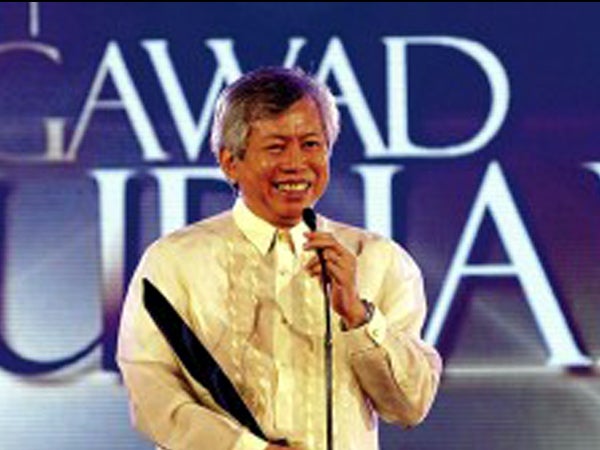 MANILA, Philippines—Writer and journalist Jose “Pete” F. Lacaba is the latest recipient of the University of the Philippines’ Gawad Plaridel, the UP College of Mass Communication has announced.

Lacaba will receive the award from UP president Alfredo E. Pascual and UP Diliman Chancellor Caesar A. Saloma in a ceremony on July 24 starting at 2 p.m. at the UP Film Institute’s Cine Adarna. He will deliver a lecture during the ceremony.

In its announcement, UPCMC said Lacaba “put his considerable writing and communication skills, despite perils to his life, in the service of the Filipino struggle for social transformation, independence, and progress during the turbulent 1960s and 1970s” through his articles (now collected in the book “Days of Disquiet, Nights of Rage”) and screenplays that were based on actual events and issues, such as “Sister Stella L.,” “Bayan Ko: Kapit sa Patalim” and “Orapronobis.”

Lacaba has also produced poetry, essays, fiction, feature articles, interviews, translations, adaptations, and screenplays in both English and Filipino. He has “raised the bar of excellence for literary journalism to a level unprecedented in the history of Philippine contemporary journalism,” the UPCMC said.

Established by the UPCMC, the annual UP Gawad Plaridel recognizes Filipino media practitioners who have excelled in print, radio, film or television and have performed with the highest level of professional integrity in the interest of public service. The Gawad Plaridel comes with a trophy especially designed by National Artist Napoleon V. Abueva.

The award is named after Marcelo H. del Pilar (nom de plume: Plaridel), whose stewardship of the reformist newspaper La Solidaridad helped crystallize nationalist sentiments and ignite libertarian ideas in the 1890s. Like Plaridel, the recipient of the award must believe in the vision of a Philippine society that is egalitarian, participative and progressive, and in media that are socially responsible, critical and vigilant, liberative and transformative, and free and independent.