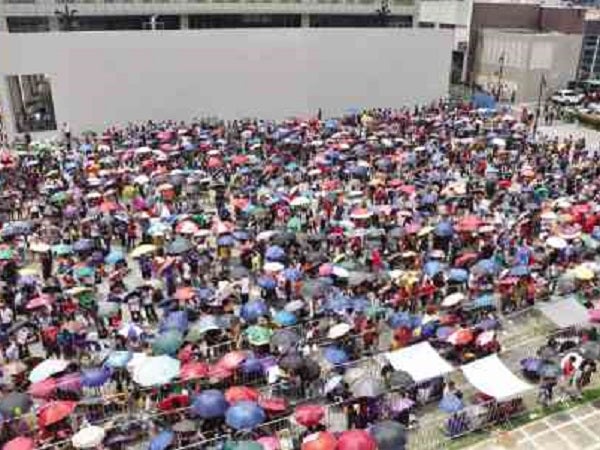 LeBron in Manila, the bullying of Suri Cruise, Adam Levine is engaged

How much do you love LeBron James? More than 6,000 fans expressed their adoration for the four-time NBA MVP by lining up at Nike Bonifacio High Street to get their hands on free tickets to his Witness History Tour. Some even stayed at the venue overnight, hoping to get first dibs. Nike Philippines is bringing LeBron James to Manila for the July 23 event at the Mall of Asia Arena. For more info on the tour, follow @NikePH.

Adam Levine has proposed to Victoria’s Secret model Behati Prinsloo, breaking a lot of hearts in the process. There have been a lot of funny tweets about this and this is one of our favorites: “Oh, and Adam Levine is engaged. Excuse me as I cry and eat whatever’s in my freezer.”

Katie Holmes and seven-year-old daughter Suri Cruise were flocked by fans and paparazzi while walking to their car in New York. Annoyed by the attention, Suri said, “We’re trying to get through!” and “Get out of the way!” One of the paparazzi responded: “Bye, Suri, you little brat!” When another man reacted to his remark, he kept repeating it and called her a b*tch. The video has caused outrage. This kid has been hounded by photographers since she was a baby and now she has to deal with verbal abuse? Not okay.

The news reached people through Facebook: “It is with a heavy heart that we share with all of you that Talia has earned her wings at 11:22 a.m.” Thirteen-year-old Talia Joy Castellano, YouTube sensation and Ellen DeGeneres’ honorary CoverGirl, lost her seven-year battle against cancer last Tuesday. The little girl won hearts all over the world with her makeup tutorials and cancer vlogs, inspiring other young cancer patients with her positive outlook. “What do you want me to do, be depressed? But a little fish told me, ‘Just keep swimming, just keep swimming,’” she said to Ellen, quoting Ellen’s character Dory in the movie “Finding Nemo.”

“Just keep swimming” has become the mantra of Talia’s friends and fans, with some of them getting the message tattooed. “You are one of the bravest people I know… I always wanted to meet you but someday I will in heaven,” one of her fans wrote.

We’d like to shake the hands of Temar Boggs and Chris Garcia if we could. The  15-year-olds rescued a five-year-old kidnapped in Pennsylvania. Jocelyn Rojas had been missing for two hours when Temar and Chris spotted her inside a stranger’s car. They chased the car on their bikes. “The guy started noticing that we were chasing him… he let her out and she ran to me and said that she needed her mom,” Temar told CNN. As the people on Reddit would say: faith in humanity restored.