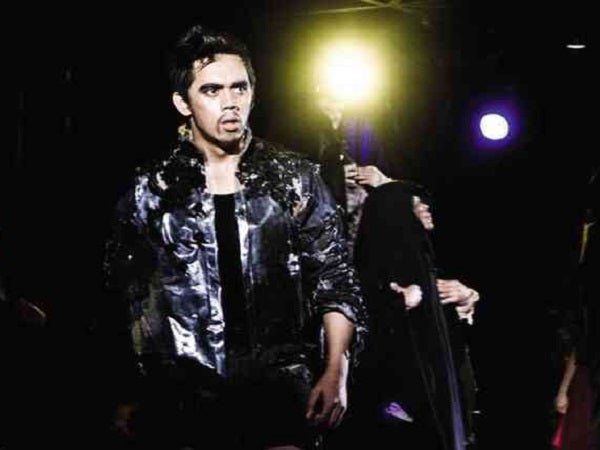 In the original Greek classic “Oresteia,” written by Aeschylus, the madness in the House of Atreus ends on a happy note. But in Tanghalang Ateneo’s version, “Ang Oresteyas,” the conclusion is more ambiguous; the play places the protagonist’s fate in the hands of the live theater audience, and ends with a question mark.

The resolution, or lack of it, is not a simple or trivial one. The original plunged into the themes of justice and retribution, the sins of matricide versus that of marital infidelity, the rivalry that can exist between paternal and maternal loyalties, and ultimately redemption that is won only after much grief, woe, soul-searching and (let’s face it) the intervention of celestial forces like the gods of Olympus.

This TA version, reimagined for today’s audience by writer Jay Crisostomo IV, removes that final act that would have woven all those themes into one darkness-into-light tapestry, and simply paints this theatrical canvas as an unending cycle of blood and violence.

In both versions, the buck stops with Orestes, the reluctant avenging son compelled to kill his mother Clytemnestra for the murder of her husband and his father King Agamemnon. This conscience-stricken prince is the last line of heirs in a blood-soaked throne that would have put Shakespeare’s Macbeth to shame.

The House of Atreus’ founding father, Tantalus, killed his own son Pelops and tried to feed his cooked flesh to the Olympian gods for no other reason than to test their supposed omniscience. Orestes’ grandfather and his grand-uncle, Atreus and Thyestes, murdered their step-brother Chrysippus. This fragile brotherly bond broke when, taking a page out of the family history, Atreus had almost every nephew killed and tricked Thyestes into eating them.

Not surprisingly, Thyestes’ only surviving son, Aegisthus, has an ax to grind against his cousin. He plots to destroy Agamemnon in collusion with Clytemnestra, who in turn wants Agamemnon dead for his having sacrificed their eldest daughter Iphigenia to the gods as an offering to win the war against the Trojans. It is a price their family would never recover from.

It is a world that no sane man would want to enter—and by removing the otherworldly elements like a radiant Apollo and a level-headed Artemis, “Ang Oresteyas” brings us immediately down to an earth that is rough, gritty and unforgiving. A cast reduced to wearing faded robes and/or muddy rags performs on a stage perpetually awash in colors of black and red.

Even the victory of war brings no good news. Ruined crops have brought famine and poverty.  Instead of gold and jewelry as his spoils of war, Agamemnon brings a bag of the skulls of his dead soldiers. His ship also brings his mistress, the Trojan prophetess Cassandra, an indirect slap against the face of his already seething queen.

The production is co-directed by Ricky Abad and Myra Beltran. Abad brings his expertise as a socio-anthropologist professor to the fore in the play’s subtle allusions to blood oaths, political dynasties and a greedy, indifferent national leadership that could care less for its people. Balancing him is the fluidity brought to the stage by Beltran’s choreography, which keeps the cast members perpetually moving, their changing facial expressions and lithe physical movements preventing the darkness of the reworked material to dissolve into a quagmire.

The predominantly young cast lives up to the challenge, which is one of this production’s main strengths. Their performances are uniformly and consistently affecting. The usually faceless Chorus emerges as the beating tired heart of the nation, mirroring its sorrows, disappointments, fear and pain.

Opaline Santos’ doomed Cassandra is utterly paranoid, devastatingly vulnerable and oddly sympathetic. Veteran thespian Frances Makil-Ignacio makes her Clytemnestra multi-layered, showing the pathos of an abandoned mother and a scorned woman who still loves the husband she has just bludgeoned with an ax.

Agamemnon (Brian Matthew Sy) and Aegisthus (Joseph dela Cruz) are embattled soldiers who cannot show and yet cannot totally conceal their emotional turmoil. Miela Sayo sheds her natural, classy demeanor to play Elektra as a totally believable former spoiled princess who lives like a whore in the sewers.

In his brief turn as the titular character Orestes, Nicolo Magno’s strong, charismatic presence wins the audience’s sympathy, as the former hope of the nation reduced to a wreck of guilt and doubt by his matricide.

The performances and soaring energy of the cast, the clipped pace and the brooding atmosphere compensate for some weaknesses of the script. Crisostomo’s reimagining sometimes works, and sometimes it doesn’t. While Elektra’s accidental viewing of Agamemnon’s copulation with Cassandra and his murder reminds us where Jung derived his Elektra complex, for instance, the reunion of Agamemnon and Clytemnestra in this limbo-like heaven serves no purpose except as a morbid memo that their hapless children are left to fend for their own.

Neither was it clear how the young children Orestes and Elektra were driven into exile; were the soldiers who spirited them friendly forces loyal to Agamemnon or bungling instruments ordered by Aegisthus and Clytemnestra?

Playing up a hidden gay romance between Orestes and Pleiades was ultimately counter-productive; once the focus of the audience was cemented on that particular aspect, Pleaides’ role as conscience and guide was ignored, especially in the parts where it mattered most.

At the end, we are left with the proverbial beating of drums to determine Orestes’ fate.  Following the original material, the jury is deadlocked, and Abad apparently leaves the decision in the hands of the audience like a reality TV show. It is an honest attempt to be relevant—but one that is loaded, unintentional though it may be.

With the redemptive parts of the original removed, and the blood-and-shadow aspects overplayed, what other choice would any audience go for?