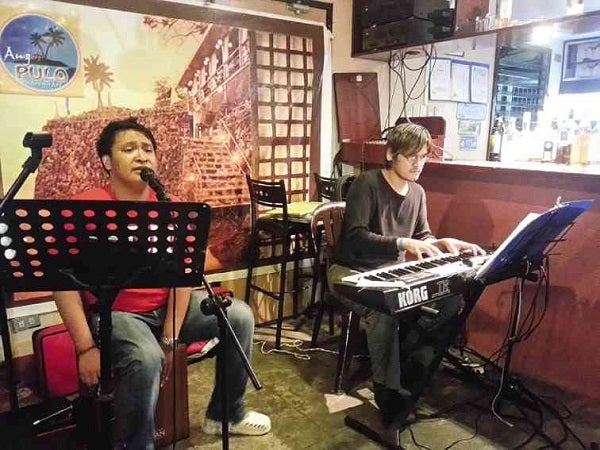 You would not imagine that inside the car exchange dealership compound Auto Camp (Ortigas Avenue Extension, Pasig, across The Medical City) is a bar and grill joint called Ang Pulo.

Nestled on a hilly terrain, the place exudes a cool ambiance similar to that of Nipa Hut (also in Pasig) and Padi’s Point in Antipolo.

On a Monday night onstage, Kell Gatdula is singing the Kenny Loggins hit “Forever”—sailing through the high notes without the strained effort that Martin Nievera usually exhibits. To think that Gatdula is singing and playing percussion on a cajon while seated.

A former vocalist of South Border (SB)—the third and last one before band leader Jay Durias went on hiatus—Gatdula sounds like he can tackle any song in the tradition of the great Pinoy biyahero who is the toast of most hotel clubs and cruise ships around the world.

When he interprets “There’s No Easy Way,” “Changes in My Life” and “I Won’t Hold You Back” note-for-note, you don’t think that he’s just another copycat because you feel the emotions that seep out of his pipes. Even his face contorts uncontrollably over the pain and sadness in the songs’ lyrics.

Or perhaps he’s just trying to prove that he can overcome the enormous task of performing with a creatively challenged keyboardist and a terribly noisy crowd.

Geez, the people here talk like high-school kids who are out on a field trip. Their animated chatter almost drown out the music—but fortunately Gatdula is so good that he manages to be heard above the din.

A male customer approaches Gatdula and jams on The Script’s “The Man Who Can’t Be Moved.” We feel sorry for him because he fails to give justice to the song’s lyrical beauty.

But another audience member dares to sing, too, and makes a lasting impression with Beyonce’s “Listen” as the crowd falls silent and lends an ear.

When Gatdula resumes singing with his version of Christopher Cross’ “Laura,” the sound of the audience’s blabber gets too uncomfortable that our companion claps hard to cut the noise.

Is it the tasty, below-zero chilled San Mig Light beer that puts the customers in a giddy mood? Or maybe they just feel so glad to be with their friends in such a homey place like Ang Pulo.

In any case, they should thank Gatdula for being a real pro.

Alaras was in the second batch of SB singers along with Duncan Ramos.

Garahe resembles a big garage, almost like a talyer, although it has a certain character that makes it conducive to drinking and listening to music.

Alaras is on his second set with guitarist Rop Preza when we settle down to order San Mig Light, which is also served chilled below-zero.

Singing in a smooth R&B style, Alaras catches our attention with his version of John Mayer’s “Back To You.”

His soulful charm in the SB original “Wherever You Are” gets a group of female fans drooling. The idol worship continues as Alaras and Preza take us on a ride back through boy band mania with Backstreet Boys, ’N Sync and Boyz II Men hits.

To test whether Alaras can do more soul stuff that challenges one’s pitch, we write a request on tissue paper: “I’m Easy” by Lionel Richie. After a few chord consultations with Preza, he proceeds and pumps palpable passion into the tune. He growls a bit as he reaches the difficult bridge part, but nevertheless ends it with grace.

When Alaras asks permission to go to the john, one of the female fans teases him: “Pwedeng samahan kita?”

As Preza takes over and sings “Bukas Na Lang Kita Mamahalin,” we feel it’s a bit weird for him to be doing that song. But another female fan is unperturbed and steps forward to take his photo. Obviously, women go deaf when they’re “in love.”

There’s something peculiarly good about the records that DJs play at the club Aruba in Metrowalk, Pasig. On any given night, even after its featured live performers have finished their last set, Aruba can make guests stay on just to listen to the house music.

On the Monday that we visited, we heard Robbie Dupree’s “Hot Rod Hearts” and other pop-rock classics from the 1980s. One can make a request and the jock on board would gladly play it, like he did when we asked for Steely Dan.

The DJs who spin the records at Aruba include Martin Porta and Jon Tupaz, both of whom also handle the late-night part of the Friday Madness program on FM radio station Magic 89.9, which is broadcast live from Jill’s in Bonifacio Global City.