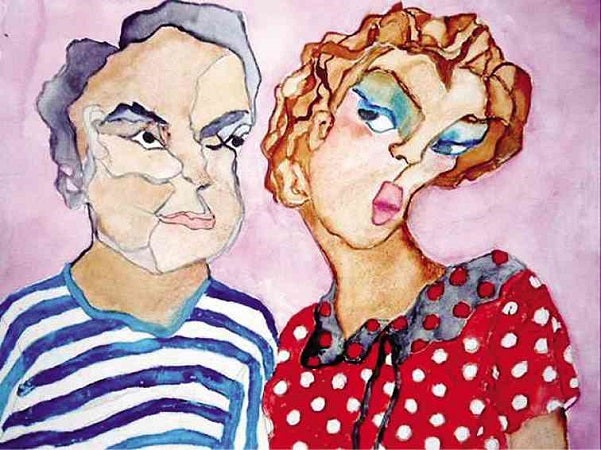 I HAVE no particular affection for the Japanese, since I was alive during the war when they were at their worst behavior. I have only one Japanese friend, Shoko Matsumoto, who is a lighting designer and has devoted most of her professional life trying to make such a calling viable for Filipinos.

One day, stage director Nonon Padilla and a small group of theater artists did a reading of one of my war stories in my house. They fixed the sala beautifully like a stage and read “People in the War.”

“Is what you wrote true?” Shoko asked, horrified, especially about infants tossed in the air and caught with the soldiers’ fixed bayonets. It turned out that everything about Japan’s cruel occupation of several countries had been obliterated from their textbooks.

My only pleasant memory of the Japanese before 1941 was the fragrant and brightly lit Koken Barbershop at the corner of our street. It had the barber’s symbol of red and blue lines snaking around a lighted barber’s pole. But mostly my memories were of Osaka Bazaar, a really neat toy shop. I was 11 years old.

Osaka Bazaar was, I think, in Villalobos or somewhere in that vicinity. From the ceiling hung a number of whirlygigs.  They had colorful cutouts in flower shapes and balls and triangles that whirled around and around when wound with a key. It was made of celluloid, the predecessor of plastic. Whirlygigs are still around today as cradle toys, smaller and tamer than their prewar forbears but still hung over babies’ beds.

Osaka Bazaar had an endless number of toys, but the ones I remember most were the celluloid dolls. The material was still imperfect so that if you happened to press the dolly’s cheek the dent remained forever. We kids tried to remedy it by prying up the dent with a pin, but that didn’t help. The doll’s face was ruined for life. To top it all, celluloid was highly flammable.

I remember most the boy and girl dolls of graduated sizes.  They were from one foot high (seated) to one inch (two for one centavo) and two inches (one centavo each). Their legs were designed for sitting. Their outfits, red or green mameluko- (or sun suit) style, were painted on the body.

The girl dolls had a headband with a big (molded) flower above each ear. The boy dolls had painted caps of red or green. The doll’s limbs were connected to one another with a thread garter so that they could be moved.

All Japanese goods then (like much of China’s now) broke easily so that consumers of the time used to shake their heads and say “Barato, roto!” (Cheap and lousy!)

All Osaka Bazaar’s goods fascinated me, from the wooden slide-out pencil boxes to the extra long pencils  with celluloid cat, dog or bird heads, although I seldom used them because they had no attached eraser. There were adult Japanese dolls, too, with kimonos and tall coiffeurs, that were under rectangular glass cases. To me they didn’t count because they weren’t real toys. Ditto for parasols.

Osaka Bazaar was burned to the ground from all those war raids. I used to fantasize that one of the girl dolls had escaped the blaze. It became an invincible heroine named Celulu in a comics story I invented and wanted to illustrate, but I never got around to.

Since then, I have enjoyed many lovely Japanese performances staged by Shoko Masumoto’s Sinag Theater in Mandaluyong and in Peta. But I have never forgiven the Japs for ravishing my country even if Homma, their general, was hanged.

All that, until I read Haruki Murakami, the international best-selling author! Even in translation, Murakami is essentially Japanese, although, as my friend Mariel says, he is enjoying its liberating freedoms. But his characters are still essentially Japanese. They are always cooking and eating with chopsticks, dining on miso soup, ramen, tofu, raddish, bonito flakes, wakame seaweeds, nori, and dried plums and sake. But they also drink gallons of whisky, smoke incessantly, and screw around a lot.

Murakami’s novels always reflect the Japanese feeling of alienation and loneliness. The characters are independent and disconnected from, and even hostile, to their parents and family.

I have read the 607-page “The Wind-up Bird Chronicles” (terrific!) and the deeper, more reflective “Kafka on the Shore,” and am now into the funnier and weirder “Hard-boiled Wonderland and the End of the World.” Like all his other books, it is fiction but also surrealism and magical realism. I still have two new books of his in store.  Irresistible!

Even if I knew Murakami was born in the post-World War II baby-boomer era, I was still shocked to learn that he was already 64 years old. He is not such a good-looking guy (mukhang Hapon).

Some quotes I took down from “Kafka on the Shore”:

“Things change every day with each new dawn, it’s not the same world as the day before. And you’re not the same person you were.”

“‘Can nothingness increase?’ Hoshino puzzled over that a while. ‘That’s a tough one,’ he admitted. ‘If something returns to nothing it becomes zero but even if you add zero to zero it’s still zero. Nothingness doesn’t grow.’”

Have a good Sunday and don’t get swallowed by your labyrinth!