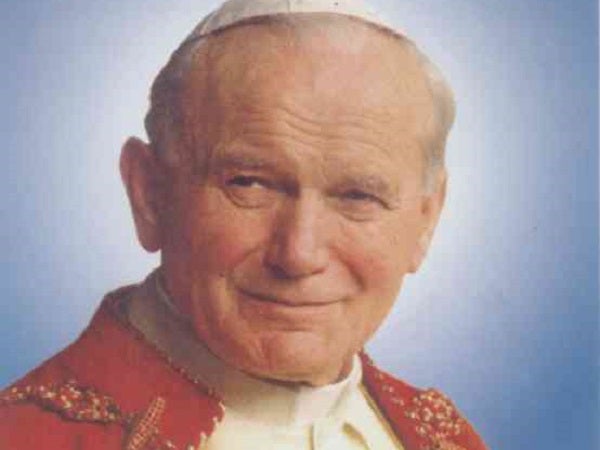 BLESSED John Paul II to be canonized by Pope Francis

Since the news came out, I have been praying to Blessed John Paul to intercede for the healing of June Keithley, whom I saw in Rome on May 1, 2011, during the beatification ceremonies. She is very devoted to Blessed John Paul II and to Mama Mary, of course, about whom she wrote about under her title, Our Lady Mediatrix of All Grace, in her book on the Lipa apparitions.

The canonization will be a historic  day for 1.2 billion Catholics around the world. The two very popular popes in contemporary times contributed hugely to Church and global history.

Pope John Paul II was the most traveled pope in history. He also beatified and canonized the most number of saints and martyrs. The ebullient, down-to-earth Pope John XXIII launched the Second Vatican Council  to introduce reforms in the Catholic Church.

Adam’s Express Travel sent large delegations to the canonizations of Josemaria Escriva on Oct. 6, 2002, and Sister Faustina in 2011, and the beatification of Mother Teresa and Blessed Pope John Paul II in 2011.  Although there is no official canonization date yet, Adams Travel encourages pilgrims to reserve ahead because millions are expected to attend the canonization. Call Adam’s at 5223876 or 5211651 or text Anna Ayo at 0917-5514468.

Legion of Mary is 73

The Legion of Mary will celebrate its 73rd anniversary in the Philippines with a Thanksgiving Mass at the Senatus of the Northern Philippines headquarters at Dangay Street, QC, on July 21, 11 a.m., with Msgr. Celso Ditan, spiritual director, as Mass presider.

In addition, the Senatus will sponsor the first Friday Mass and vigil, with Sangguniang Layko ng Pilipinas, on Aug. 2 at the CBCP Chapel in Intramuros, Manila. Vigil will be at 9 a.m.-4 p.m. Mass at CBCP Chapel will be at 12 noon.

The Legion of Mary was founded by Servant of God Frank Duff on Sept. 7, 1921, in Dublin, Ireland. It is a lay apostolic organization serving the Church under ecclesiastical guidance.

Frank Duff passed away on Nov. 7, 1980, and the cause of his canonization was introduced by Dublin Archbishop Desmond Connell  in 1996.

An alleged miracle interceded by Frank Duff on the healing of John David Arcega has been submitted to the Dublin church. It will be one of the miracles to be submitted to Rome. John David is now back in school after he recovered from his illness.

Thanks to Mila Que, I became devoted to St. Mary Magdalene, patroness of Kawit, Cavite, whose feast day falls on July 22.

I met Jovita Peregrina  who survived cancer through the intercession of  the saint.

Now, Aling Jovita is taking care of the image especially during the novena and fiesta Masses.

Imus Bishop Reynaldo Evangelista will officiate the concelebrated Mass  tomorrow, 9 a.m.  Masses in the afternoon are at 5 p.m. and 6 p.m.  Fr. Romeo Ner is the parish priest.

In the parish of St. Mary Magdalene in Amadeo, Cavite, Fr. Oliver Genuino, parish priest, will lead the celebration of the fiesta tomorrow.

I visited this church before Holy Week this year and was impressed by the beautiful image of the saint enthroned on the left side of the altar.

Father Genuino expressed the opinion that Mary Magdalene was not the adulterous woman about to be stoned for her sin, whom Jesus forgave. Neither was she the prostitute who washed Jesus’ feet with her tears and rubbed them with expensive oil in the house of Simon, the Pharisee.

I became devoted to St. Anne, the mother of Mary, way back in 1981. I had achalasia and I remember placing her prayer near my bed in PGH where I was confined at the time.

Try to seek her intercession; especially pray to her and St. Joachim every Tuesday before 9 a.m. and say “St. Anne and St. Joachim, please grant me a pleasant surprise today.”

This prayer was taught to me by the late Albert Seeland, manager of Tempura Misono in the old Hyatt Hotel. Please pray for the repose of Albert Seeland’s soul on Aug. 13, his birth anniversary.

We who hear Mass at Harrison Plaza Chapel are blessed to have the image of St. Martha there.  The chapel is named after her.  Every Tuesday,  devotees come to pray to her and  click the light in front of her.

The feast of St. Martha falls on July 29. It is also celebrated in Pateros, Rizal.   Her miraculous image is enshrined there in San Roque Church.  Fr. Roy Rosales is the parish priest.