‘What you need you already have’ | Inquirer Lifestyle ❮ ❯ 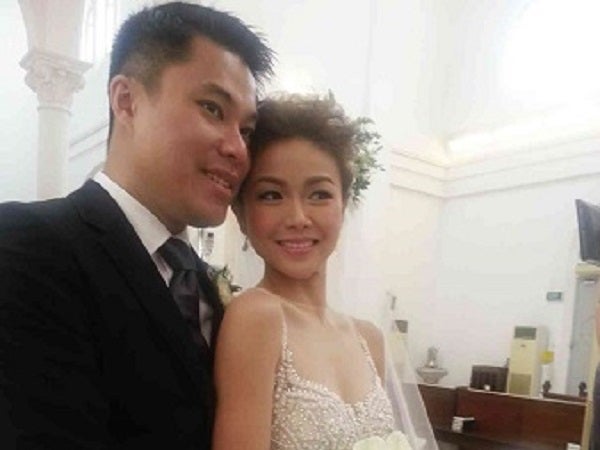 A COUPLE not self-conscious at all

‘What you need you already have’

ON THE EVE of their wedding, the groom called up the bride, a bit worried. He was hoarse, he said, from all that practice, and wondered if he could get back his voice in time for the wedding reception.

The amused bride told her groom not to lose sleep over it, and that for sure, he would get his voice back the next day.

Turned out, Kevin Tan was rehearsing for the performance of his life—not just his and Michelle’s wedding, but perhaps as important, his welcome song for his new bride at the reception.

Kevin not only kept his voice, he even showed it off, to the oohs and aahs of guests at the reception. His singing was the big surprise of the night.

After some time that the guests had seated themselves at the elegantly decked Great Room of W Sentosa Cove, a voice announced that the new couple would be walking in. As the ballroom doors swung open and the spotlight beamed on them, who should walk in but only the bride. Then the groom’s voice began to fill the vast ballroom—singing David Guetta’s “Without You.” (“Not even Mariah Carey’s ‘Without You,’ but Guetta’s?” our Lifestyle reporter would ask us later, incredulous. Yes, we confirmed.)

Groom and bride danced to the groom’s singing, as the guests—transformed into an instant captive audience—applauded incessantly. It was an impressive performance, and yet another novel way of kicking off a wedding reception. We’ve gotten used to couples dancing their way onto the ballroom reception, but this was the first time we watched a groom sing and dance—to a band.

Did the groom have jitters? I don’t think so. Megaworld scion Kevin Tan, 33, is never afraid of the spotlight, not even with media watching. He is a people’s guy. Unlike other sons and daughters of tycoons, he is not only accessible, he also truly enjoys being with people. What can you expect? His parents, Andrew and Katherine, made sure he would get used to the company of people other than his family or clan.

They sent him—the eldest in a brood of four—to study and live in Hong Kong at eight years old, an age when Filipino boys, in general, aren’t even weaned from their yaya.

The wedding of Kevin and Michelle Tan in Singapore last July 12 couldn’t but reflect the groom’s sociable nature—his friends who flew to Singapore filled an entire Cebu Pacific flight. There were more than 60 of them—coming from the club scene to the lifestyle scene; after all, Kevin is in charge of Megaworld’s lifestyle malls.

His father, Andrew Tan, Megaworld chairperson, conceded as early as the civil ceremony reception held last month at Resorts World in Pasay: “These are all Kevin’s friends and those of Michelle (more than mine). Kevin has many friends.”

Even the principal sponsors have personal ties to the young couple, starting with Energy Secretary Rene Almendras who, relatively young as he is, had a nugget of (husband’s) wisdom to share with the newlyweds as he and wife Marides were leaving the reception that night: “Don’t forget laughter. Don’t lose that ability (to laugh) through the years.”

Then there was Rustan’s and SSI’s indefatigable boss Nedy Tantoco who, Kevin proclaimed in his thank-you toast after dinner that night, helped see him through his early formative years in mall retail.

Easily among the most pleased, if not the happiest, that night was tycoon Andrew Tan who told us, “I’ve been waiting for this for six years.”

He meant that he had been wanting his eldest son and heir apparent to settle down. Kevin was one of the town’s most eligible bachelors who had been linked to gorgeous women, and sometime ago, was engaged to one of them. But, he didn’t think then that it was it.

And so, as he recounted to Inquirer Lifestyle last month, as it happened, one night, he was attending a birthday gig of a good friend (who’d turn out to be Ricardo Po) at Opus, when Michelle happened to be there, too, waiting for friends who were late for dinner.

Kevin struck up a conversation and kept Michelle company. “I was attracted right away,” he told Lifestyle in that early interview. “She’s beautiful. We had good conversation… For me, it was love at first sight.”

What struck Michelle was how Kevin offered her some advice on how not to get drunk. Right off the bat, Kevin gained Michelle’s initial trust.

At the wedding dinner reception, Century Tuna’s Ricardo Po, therefore, was right to proclaim, “It was a match made at Opus!” (and at his birthday party).

But going back to how their romance bloomed: When Kevin went to the men’s room and returned to Opus to see Michelle gone, he thought that was the end of it. The next day, however, he got a text from her, thanking him for being gentlemanly enough to keep her company. Two days later, they met up for lunch where, Kevin noted, among other things, Michelle was gracious enough to pour him tea—just like how solicitous his mom is to them.

That was a year ago. Kevin, 33, and Michelle, 30, were engaged in New York, where, at one dinner, Kevin proposed marriage.

Although they had a civil ceremony, the couple was bound to have a Catholic church wedding; commitment to religion is among the values that drew them to each other. (Kevin doesn’t like missing Sunday Mass.) Upon the suggestion of their friend, Fr. Romeo Yu Chang, the couple decided on the Church of St. Teresa in Kampong Bahru Road in Singapore.

It is not a cavernous church. It is big enough to accommodate a crowd, yet small enough to be cozy. Its classic architecture, with white interiors, is elegant. On its long aisle walked Michelle with her parents Wilson and Catherine See, her long train a wisp of white.

Michelle wore a Veluz design—a froth of tulle for a ballgown skirt, a fitted lace bodice held up by an illusion tulle that dipped at the back.

Something old? A teardrop-shaped diamond earring from Kevin’s mom, much bigger than a drop of tears, definitely! (Katherine herself wore a dazzling yellow diamond emerald-cut pendant, its light yellow glitter blending so well with her lime green column gown.)

Before the drive to the church that morning, I asked her what she and Kevin would bring through their entire married life. “Family first,” she said, even as she gathered up her voluminous skirt. “That’s one thing that attracted me to Kevin—his sense of family.”

A UST graduate, Michelle is a workhorse, like her new husband. She herself looked into the wedding logistics, down to the details, such as flight bookings of the guests.

At the reception, when the parents’ turn to talk came, her father Wilson was barely able to read his prepared notes, overcome as he was with emotion. It was obvious that this daughter’s leader-presence among her three siblings would be missed.

The church was simply decked, with bouquets of white roses mounted on the pews lining the aisle. All the principal sponsors were in dainty beige chiffon or silk, designed by Katherine’s choice designer, Amir Sali, who had a long stint in the Middle East.

The reception was in the five-star luxury hotel W at Sentosa Cove, where the guests were also booked. Its Great Ballroom was a dreamy scene, with the strategic lights bathing the whole room in filmy white. White roses and orchids dotted the tables, their arrangements in various heights. Ghost tiffany chairs (as the transparent tiffany chairs are called) helped make the entire scene seem lighter. They blended with the crystals and glassware.

The sounds that night were from a band and DJs from Manila, so it was as if friends of the newlyweds didn’t leave Opus at all.

While it was an elaborate celebration, the wedding of Kevin and Michelle was really about family and friends—the ties that bind.

Nobody could have said it better than Fr. Chang at the nuptial Mass. He told the young couple who knelt before the altar: “What you need, you already have.”