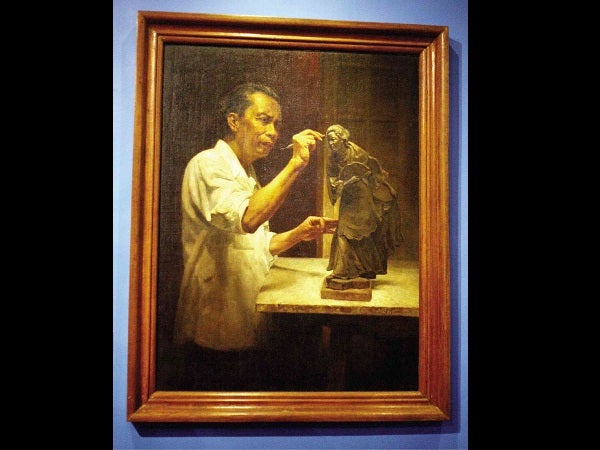 PUTTING the finishing touch on a piece

A retrospective exhibit of 1973 National Artist for Sculpture Guillermo Estrella Tolentino, among the first to be given the award by the Cultural Center of the Philippines, has long been overdue. It is understandable since it is logistically near-impossible to gather his major works in an exhibition room as they’re mostly monumental and rooted in specific areas.

This is one Filipino artist whose works can be truly considered iconic: the “Oblation” on the UP campus; “The Cry of Balintawak” in Caloocan City; the hero’s monument at Liwasang Bonifacio; “Filipinas in Bondage” at  Jorge Vargas Museum; the designs of the official seal of the Republic of the Philippines and the medal of the Ramon Magsaysay Award; busts of numerous presidents; the group portrait of heroes called “Galeria de Filipinos Ilustres” (drawn when he was still in high school and attending classes at the UP School of Fine Arts, later printed in Liwayway magazine, thus finding its way into many a Filipino home).

Finally, a grand exhibition of his works, “Eskultor ng Lahing Filipino: Honoring the Life and Work of National Artist Guillermo Tolentino,” will be opened to the public on July 24 in the National Art Gallery’s newly launched Security Bank Hall at the National Museum of the Philippines, Padre Burgos Drive, Rizal Park, Manila.

Aside from items from the National Art Collection, on loan for the exhibit are 14 Tolentino sculptures from the collection of Security Bank chair Frederick Dy; numerous pieces from other private collections like Ernesto and Araceli Salas’; and those from the Tolentino family, which used to be displayed at Pasig City Museum.

These are heroic sculptures, bas-reliefs, busts, in marble, granite, bronze, plaster or concrete; drawings, paintings, lithographs, studies; certificates, medallions, plaques. The monolithic ones are represented by scale models, such as the Bonifacio Monument, the “Oblation,” the Triumphal Arch of the Commonwealth (unproduced, planned to be built at P. Burgos Drive cor. Taft Avenue).

This is the fruit of the labor of National Museum director Jeremy Barns and assistant director Ana Labrador. To be sure, “a personal, logistical and curatorial challenge” (in Labrador’s words). But they’ve been aided in no small ways by their team of conservator Robert Balarbar, art researcher Buen Calubayan, exhibitions designer Marcelo Cercado.

Since 1996, when the old Legislative Building was transformed into the National Museum, until early 2011, when Barns and Labrador created a curatorial plan for the National Art Gallery, Labrador says there had been no system, no proper exhibition in the museum.

“There never was a sufficient program of accessible curated exhibits for the general public,” she says. “There were not enough people coming to the museum because there was nothing exhibited.”

The curatorial plan they have in mind is “kind of linear, chronologic, contextualized exhibitions that would reflect the aspirations of the Filipino people, permanent exhibits with sociohistorical background.”

The halls are being restored one after another for these exhibits. “This year we can open five more,” says Labrador.

The museum has 25 functional halls, most of them being offered to sponsors and patrons, individuals or corporations, for the naming right. Now housing the museum’s World War II collection, for instance, is the Silvina & Juan C. Laya Hall.

Labrador says it was Barns who was insistent on a hall that would be devoted to Tolentino, as he had been in charge of a number of his sculptures when he headed Malacañan Palace Museum for eight years.

The Security Bank Hall (formerly identified as Gallery XII) opened two months ago. Intended to be its permanent exhibit is “Eskultor ng Lahing Filipino,” opening on Wednesday in time for Tolentino’s 123rd birthday.

A champion of Classical Art, Tolentino figured in the drawn-out debate over Classicism versus Modernism with painter Victorio Edades. He mentored sculptors Napoleon Abueva and Anastacio Caedo.

Abueva, later a National Artist himself, has been quoted as saying Tolentino was “beyond doubt the first and last master in the representation of the human form in the Philippines.”

A clear demonstration of this mastery of form and complexity of process is his dynamic union of Classicism, Realism and Romanticism, and seamless blending of the solid physique of his assistant Caedo and the height and proportion of Caedo’s brother-in-law Virgilio Raymundo, to create that perfection of the human form that is the “Oblation.”