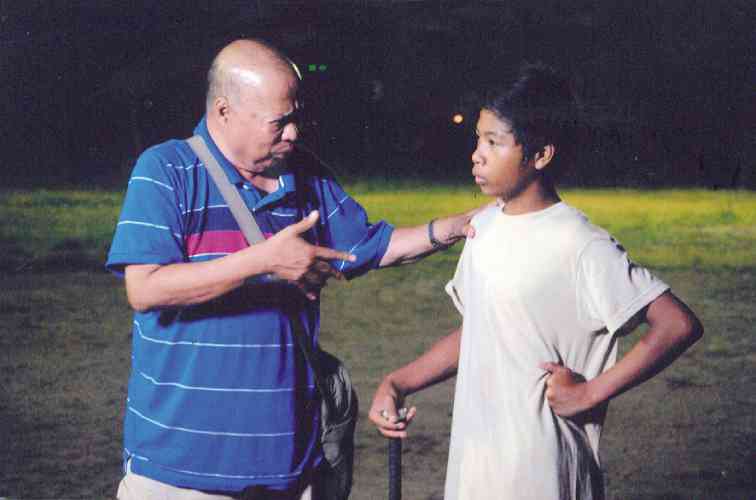 “Field of Schemes” is how the journalist character played by Alessandra de Rossi in the  Cinemalaya film “Liars” puts it, a clever allusion to another baseball movie, “Field of Dreams.”

But the new movie by Gil Portes is a far cry from the optimistic Kevin Costner movie: ‘“Liars’ is dark and unabashedly pessimistic, perhaps averse to providing a moral compromise to history and its denigration of the truth.

Perhaps it could not be otherwise. “Liars” is a fictional account of the 1992 Little League World Series scandal.

Held in Pennsylvania, the 46th series saw the Zamboanga City team crowned champion only to be stripped of it later when the Philippine Daily Inquirer reported that the team had used ineligible players who did not meet either age or residency requirements.

The movie marks Portes’ return to the Directors Showcase of the Cinemalaya indie film festival. He had joined the division, which presents five films by established directors, on its inaugural in 2010 with the well-received black comedy “Two Funerals.” While both are gloomy, “Liars” is more daring and ambitious.

Instead of Zamboanga, Portes sets “Liars” in godforsaken Smokey Mountain. Written by Senedy Que, the narrative happens during the bedlam of the Estrada-Arroyo transition as backdrop, when two children, Dante (John Michael Bunapos) and Ato (John Harley Hicana) come home from a national baseball competition. Having won the national series, they are set to fly to Taipei, Taiwan, for the regional competition, which may be their gateway to the World Series in the United States.

But things change when a sports official (Cris Villanueva) entices the team’s coach (Arnold Reyes) to replace three boys with much more experienced substitutes, with the promise of a bright future for him and the boys to be replaced.

Dante, meanwhile, has been badly injured by his violence-prone father (Richard Quan) after he tried to stop him from hitting his mother (Sue Prado). This becomes the excuse of his coach to have him rest for a while. Unbeknownst to him, he is being replaced in the team.

Eventually the truth shall sift through the cracks, as Eloisa (De Rossi), a journalist who just recently finished college with a sketchy background, exposes the truth which rocks the world to its core. Nothing is ever the same again. Little League and baseball seem not to be innocent, after all.

In an interview with Inquirer, Portes says he is a firm believer of the Daang Matuwid (straight path) of President Aquino, which is what he wants to send across in “Liars.”

“I do not want to sound political, but I cannot stand corruption, lying and cheating,” he says. “The young people should watch this because they must see what is really happening. The film won’t change the world [but at least] children could learn lessons from this.”

The movie begs for pathos, but does so effectively. It is their hopes and dreams that ballast the main characters, especially Dante, from the impending chaos and their loss of dignity.

“Liars” is emotionally charged and somewhat heavy-handed. But it is sordid and depressing where it should be. More than the scandal that brought damage to all the lives of the characters in more ways than one, the film is about the search for reconciliation and for atonement.

We are torn here between telling the truth or keeping our mouths shut, since whatever we do may throw everything off-kilter and subject it to chaos.

But we learn to sympathize, which is the hardest part in the film, whichever  camp we are on.

The dialogue may be overwrought at times and some scenes seem contrived. But they are quickly relieved, if not redeemed, by the actors who deliver stellar performances.

Although the neophyte child-actors seem tense, stilted and rigid in parts, they generally perform their roles convincingly.

Twelve-year-old Bunapos is the real deal here. He had admitted to  Portes that he had a hard time reading, having only finished fourth grade, so that his lines were dictated to him. But he picked up quickly and renders his lines here almost flawlessly, and the way he adds his own lines and interpretation adds to the believability of it all.

Bunapos also plays it coolly, trying his best to restrain from the histrionics in the face of emotion-laden scenes. Surely he will put veteran actors a run for their money.

Gawad Urian-winning actors   Prado and De Rossi, albeit with minimal appearance in the film, add to the film’s strong verisimilitude. Reyes and Villanueva do equally and wonderfully well.

The camera work is agile, giving viewers an almost panoptic feel. One of the most poignant scenes   has Dante finally opening up to Eloisa and  the camera moving 360 degrees. The dialogue has been taken off and the viewer can only see Dante’s mouth moving while music plays in the background.

The camera just goes centripetally and, as the law of motion has it, we are slowly drawn to the scene as emotions escalate. We do not have to hear what the characters are saying; the moment just presents itself.

In the interview with Inquirer, Portes says that since the 1992 scandal he has had a fascination with the story. He put the material in the backseat for a while, until recently news articles started to get published in the run-up to the 20th year of the incident. This sparked Portes and Que to revive their project.

“The first sequence treatment was written a few years ago,” Portes says. “We submitted it to Cinemalaya but it wasn’t accepted for some reason. But we did not give up. I was contemplating whether to push a personal script or this one.”

He says they joined “Liars” in the last minute. Que called him up on the last day of submission and told him to come to the Cultural Center of the Philippines (CCP) for the paperworks. Portes, dazed, went to CCP an hour shy of deadline.

Portes is very thankful for Cinemalaya, which he says has given him the imprimatur in directing.

“That’s why I really like Cinemalaya; we can do daring and adventurous films without being controlled,” he says. “If you do not have imprimatur, it will be difficult for you.”

He says  he anticipates a fierce competition in this year’s Cinemalaya, which is celebrating its ninth year.

He says  he is confident  “Liars” will be greatly received because he has found the right audience in Cinemalaya.

“Winning is only a bonus. You are already a winner when your film is shown,” he says.

“Liars” will be premiered at the Cultural Center of the Philippines Main Theater on July 27. The Cinemalaya festival will run at the CCP  and Ayala malls July 26-Aug. 4. Call CCP Film Office at 8321125 local 1704-05; visit www.culturalcenter.gov.ph.