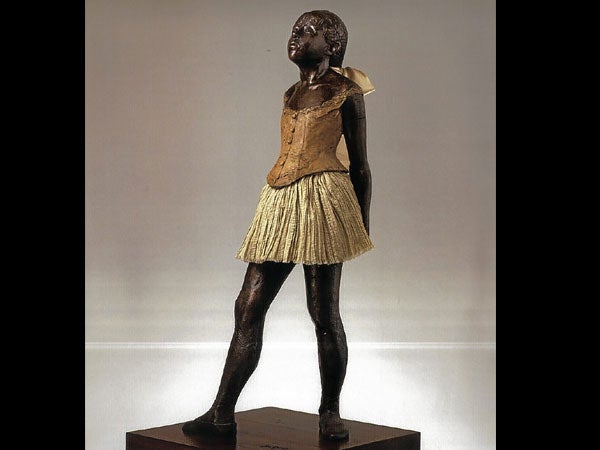 Is the Philippines ready for Degas’ ballet sculptures? Standing over a meter in height, the pubescent female wore a smooth bodice and short gauzy shirt, revealing her legs in a balletic fourth position. Her pigtail caught in a bow, her chin raised, and hands clinched behind her butt, she stood expressionless except for the naiveté in her half-open eyes. The straps of her blouse gently dropped down her shoulders, which a century ago seemed obscene.

“The Little Dancer, Aged Fourteen” was the only sculpture, done in wax, ever exhibited by artist Edgar Degas. Displayed at the Sixth Impressionist Exhibition in Paris in 1881, it drew mixed reactions, largely unflattering.

Elie de Mont of La Civilization described her as an “opera rat” and if she were any smaller, she should have been kept in a jar of alcohol.

Paul Mantz of L’Exposition des Independentes found it “frightening” and hoped his daughter would never become a dancer. He was referring to the subject’s awkward stance of leaning back with the stomach sticking out and the hiked hip.

Some were intelligent enough to discern Degas’ realism and his drive to go over the edge. Joris-Karl Huysmans wrote: “At once refined and barbarous with her ingenious costume and her colored flesh which palpitates, furrowed by the work of the muscles, this statuette is the only modern attempt I know of in sculpture.” 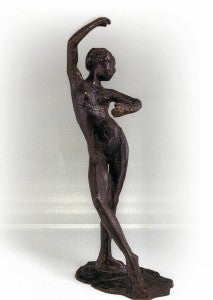 Degas was disheartened by the public flak that he never exhibited another piece of sculpture in his lifetime. When he died, some 150 of the original sculptures, mostly in wax, were discovered in his home and studio, only 80 in good condition. His heirs had the sculptures cast in bronze and catalogued by the Hébrard Foundry in Paris.

In his later years, Degas was said to have focused on sculpture because of his poor eyesight. His subjects were mostly animated—danseuses, bathing women and galloping and backing horses, all depicting movement, abstract shapes. He breathed life into these works with his realistic contours and raw textures. It was his way of defying conventions by lending dynamism to a lifeless object.

Degas favored wax for its tactile quality and the way it caught the light, making the figure look fresh, and adding warmth and expressiveness. These nuances tend to be lost upon cast in bronze. 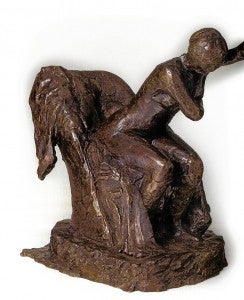 Still, the viewer can appreciate Degas’ aesthetics. His female bathers are caught in uncompromising poses such as abashedly covering the private part or wiping the armpit.

Although the poses of the dancers may seem unrefined by today’s standards, Degas understood the importance of the dancer’s axis. The sculptural movement of the arms and legs become centrifugal, encircling and shoving the space.

Art writers say Degas has a certain intimacy with his subjects in sculpture that is not found in his paintings, where he takes on the perspective of an observer.

In this age of core fitness and biomechanics, today’s viewer might find Degas’ dancers crude.

New York Times dance critic Alister Macauly wrote in his defense: “Are some of the positions in his sculptures—especially the line of the torso in his several treatments of arabesque penchée—merely bad ballet? Many dance people today think so. I disagree: They record ways of dancing now outmoded and show the ideals to which Degas’ women aspired.” 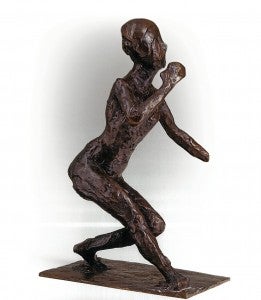 He added that Degas wanted to show the difference between the ideals of beauty and the challenge of attaining perfection. “This ideal-reality paradox connects to his paintings, especially those depicting ballet. He seems to have been as interested… in the tension between the actuality of women’s lives and society’s expectations.”

Art collector and philanthropist Yank Barry, chair of the anti-hunger initiative Global Village Champions Foundation, owns the complete sculptures of Degas. His collection is touring the world and he hopes to share his art to the Philippines.

Barry is a composer, musical arranger, record producer, businessman and benefactor. He has garnered 112 humanitarian awards for his work with Global Village Champions Foundation (GVCF), which he founded with three-time world heavyweight-boxing champ Muhammad Ali.

Barry visited Manila last week to promote GVCF and finalize negotiations with Manny Pacquiao as the new spokesperson for his cause.

Barry is eyeing the National Museum as venue and plans to organize a glamorous charity dinner. Half of the proceeds will go to the museum.

Despite his efforts to champion the cause of world hunger and art, there has been much controversy over the authenticity of Degas’ sculptures and the casting technique. Art expert Walter Mailbaum explains that, in 2004, 74 Degas plasters were uncovered in a foundry in France. It turned out they were made when Degas was still alive. He delegated the task to his close friend Albert Bartholomé.

No bronze sculpture had been cast from these plasters. Hence, the Degas Sculpture Project Ltd. asked permission from the legal heirs of Degas to allow the casting of bronze sculptures from the original plasters. The Valsuani Foundry used the lost traditional wax method to remain faithful to every detail of the masterpieces.

Mailbaum says: “They were cast by Valsuani from original plasters made during Degas’ lifetime with the artist’s approval. Thus, the Valsuani bronzes are superior in fidelity and closer to the hand of Degas.”

Barry hopes Filipinos would have the opportunity to witness the brilliance of the artist who was ahead of his time.