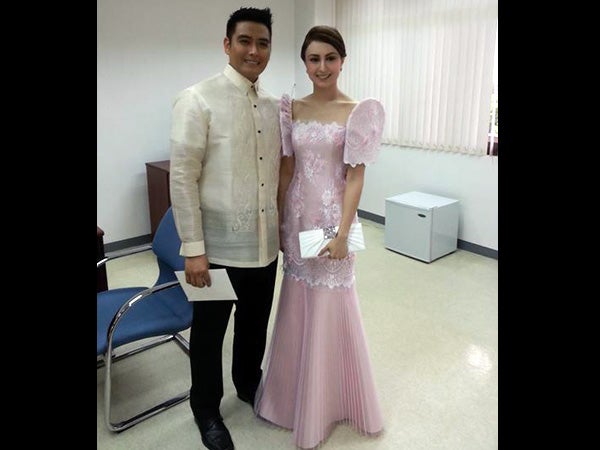 Aquino’s fourth SONA also brings out the finest in fashion

MANILA, Philippines—Year in and year out, even before the President makes his State of the Nation Address, lawmakers and their significant others’ SONA finery also make it to the news.

It was the same this time for President Benigno Aquino III’s fourth SONA.

From Senator Chiz Escudero’s girlfriend Heart Evangelista to Timi Aquino, wife of Senator Bam Aquino, lawmakers’ partners took the spotlight as they hit the red carpet at the House of Representatives.

Evangelista seemingly glided through the North Wing Lobby beside Escudero.

She was clad in a simple yet elegant and form-fitting terno.

Timi, wife of neophyte Senator Aquino, was introduced to the media in her old rose terno by Noel Crisostomo.

The dress was made by a Davao-based designer, she said.

Grace Singson was in an emerald green Patis Tesoro creation.

Not to be outdone by women in the House for the President’s SONA, Bayan Muna Representatives Neri Colmenares and Carlos Zarate both wore statement barongs emblazoned with their opposition to the Visiting Forces Agreement and mining in Mindanao, respectively.