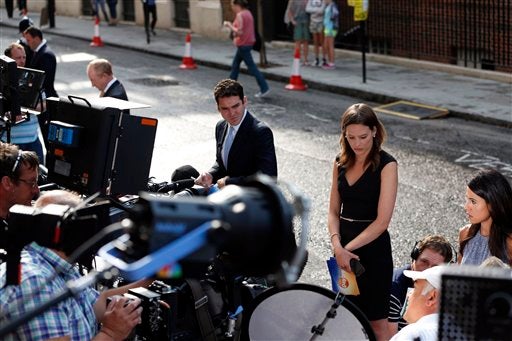 Members of broadcast media give live reports across from St. Mary's Hospital exclusive Lindo Wing in London, Monday, July 22, 2013. Buckingham Palace officials say Prince William's wife, Kate, has been admitted to the hospital in the early stages of labour. AP

LONDON—A flood of last-minute bets on Britain’s royal baby poured in on Monday even as Prince William’s wife Catherine was in hospital in labour.

Most of the money was going on the name of the third-in-line to the throne, with one bookie suspending betting on the subject.

“The majority of that is on the name. We have suspended betting on the date.”

Speculation that the baby is a girl, based on a misheard comment by Kate in March, means girls’ names are most popular with the punters.

“There is a clear view that the baby will be a girl so there is lots of activity around girls’ names,” a spokeswoman for British betting firm William Hill told AFP.

“Alexandra and Charlotte are the most popular.”

Other favoured names are Diana, William’s mother’s name; Elizabeth, after the current queen; and Victoria, after Britain’s longest reigning monarch.

Those who think the baby will be a boy have plumped for George and James.

James is the name of Kate’s brother but George has been the favourite “from day one”, say the bookies.

Bookies say they have taken more than £1 million in total on what they have called the biggest novelty (non-sporting) market of all time.

Bets have come in from around the world with one Austrian man placing £1,000 on a male baby.

Scott said the amount of money is “quite staggering” and compared to what would be placed on English football’s FA Cup final.

The most bets by volume have been on the name Diana but they have been smaller amounts of money and it has drifted out of the odds, he said.

The date itself seems nearly certain with firms suspending the betting on Monday now that the Duchess of Cambridge is in labour.

In the run-up it was an unpopular choice of day, though.

“The 17th was the most popular. Only five percent of the bets were placed on today—today was an outsider,” said the William Hill spokeswoman.

“Everyone seemed to think that the baby would come last week.”

Even after the birth there will be no rest for the betting firms, with people now betting on Kate’s sister putting in an appearance.

There are also bets on the godparents with “the usual suspects—David Beckham, Prince Harry, and Pippa” among the favourites, said the William Hill spokeswoman.

And the betting bonanza could go on for years—firms are already taking wagers on baby number two.