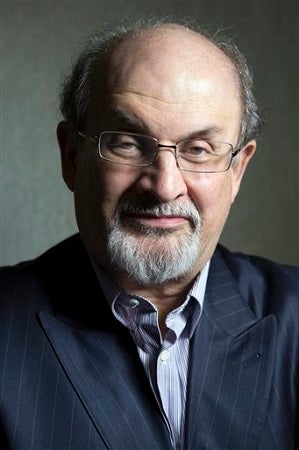 Amis, Rushdie and McEwan appear together in NY

NEW YORK — Put Salman Rushdie, Martin Amis and Ian McEwan on a stage and expect a night of high art and school boy humor, of reading, writing and Christopher Hitchens.

The three literary stars, all in their 60s and friends for more than half their lives, appeared together Monday night at the 92nd Street Y on Manhattan’s Upper East Side. Amis and McEwan were there to read from their latest novels, both now out in paperback. Rushdie handled the introductions and the question and answer period that followed the readings.

They dressed for style and for leisure — jackets, no ties — and exchanged compliments, curse words and winks to the past. Rushdie mentioned an old game they liked to play, taking titles with the word “love” in them and substituting “hysterical sex,” as in “Hysterical Sex Is a Many-Splendored Thing” or “Stop! In the Name of Hysterical Sex.” Rushdie also made jokes about the Booker Prize (Rushdie and McEwan have won it; Amis has not) and about Amis’ legacy as one of Britain’s great angry young men, “ruining and disturbing” his country’s fiction, as the old guard used to complain.

Amis read from a few sections of “Lionel Asbo,” his dystopian take on 21st century Britain, and McEwan followed with a long passage from “Sweet Tooth,” a spy novel and literary excursion. The audience questions, submitted on index cards, ranged from writerly matters such as the role of unreliable narrators in fiction (the distinguished gentlemen were all for unreliable narrators) to an incident back in the day when McEwan supposedly met a woman and immediately, crudely propositioned her.

His encounter was “not successful,” McEwan assured the audience, and he “never tried that again.”

Amis, a most accomplished womanizer in his time, added with a smirk: “I never did anything like that.”

At the start, Rushdie had referred to a “missing fourth person,” their departed friend Hitchens, who died of cancer in 2011. During the question and answer session, Rushdie noted that several cards filled out by audience members asked about the indomitable essayist and commentator and how the writers thought he would be remembered.

Amis observed that while Hitchens was known for his political commentary, he believed that Hitchens would endure as a “literary phenomenon,” if only because Hitchens’ politics were so “eccentric.” (Hitchens was the rare author to have admiring words for both Karl Marx and the Iraq War). McEwan called Hitchens a “fantastic speaker” and “amazing in the art of conversation,” and remembered how he spent his dying hours determined to complete a 3,000 word essay on the author G.K. Chesterton.

“That’s what’s so painful,” McEwan said of Hitchens, adding that such a life and “combination of genes” were unlikely to be seen again.

Final question: Given the chance, which of their books would the writers like to change?

Amis said he wouldn’t have minded another week to work on the novel “Time’s Arrow,” but otherwise disparaged the idea of revising old work. McEwan confessed that his first published book, the 1975 story collection “First Love, Last Rites,” suffered from a love affair with commas. The author has been influenced, much too influenced, by the novels of Samuel Beckett and had fallen for the idea of using commas instead of periods to end sentences.

At the time, McEwan thought he had pulled off a triumph of “cunning,” he explained.