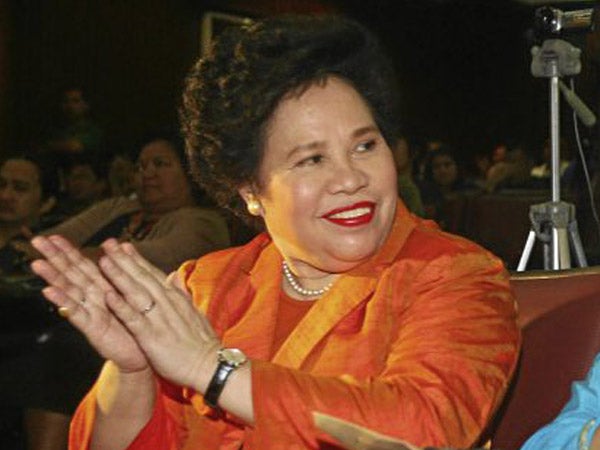 So on Tuesday, Santiago  said she would file a resolution, prescribing an official uniform for Congress members attending the annual SONA to prevent a repeat of Monday’s event “where male and female lawmakers took turns displaying “bling” clothes and jewelry, and acted as endorsers of expensive designers.”

“I watched TV and could not stand it,” she said in a statement.

“The SONA event should be a serious time for the Congress to pick up policy directions indicated by the President.  It should not be treated as Oscar night in Hollywood, with a red carpet, where peacocks spread their tails and turn around and around, as coached by media in a feeding frenzy.”

Santiago said the clothes should merely indicate membership in the Senate and House of Representatives, to separate them from those who are not members.

“The highlight of the SONA is the President.  It is not the flashy women.  Now the flaky men are even getting into the act.  They also parade, sometimes with photogenic arm candy, into the session hall and preen like their female counterparts.  Enough!” she said.

For women, Santiago said, the uniform should be a short pencil skirt, paired with a simple short-sleeved barong blouse.  Jewelry should be a single strand of Philippine pearls.

For men, it should be a plain long-sleeved barong, she said.

“Both men and women could wear a ceremonial ribbon with the Congress logo.  For the gallery, it should be office attire,”  said Santiago.

Not the proper venue

Santiago, who  failed  to  attend the SONA due to acute chronic fatigue, has decried for the last few years, the expensive floor-length gowns worn by Congress members and even by their spouses, many produced by high-end designers.

“I was once a clueless participant in those mindless events.  Don’t get me wrong.  I am very proud of our local fabrics and our local designers, some of whom are world-class.  But the SONA event is not the proper venue for their talents,” she said.

She also reminded lawmakers that the law “frowns on conspicuous consumption which she called “the obsession to bling.”

The senator cited the Civil Code, Article 25: “Thoughtless extravagance in expenses for pleasure or display during a period of acute public want or emergency may be stopped by order of the courts at the instance of any government or private charitable institution.”