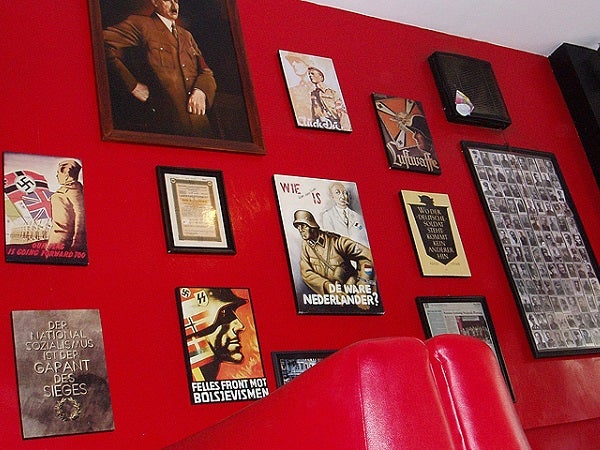 This Sunday, July 14, 2013 photo shows Nazi-related memorabilia hanging on a wall at Soldatenkaffe restaurant in Bandung, West Java, Indonesia. Authorities in central Indonesia will ask the restaurant owner to explain his reasons for opening the Nazi-themed cafe that has sparked controversy among locals and tourists, an official said Thursday. AP PHOTO

BANDUNG—A controversial Nazi-themed cafe in Indonesia would be reopened with a broader World War II theme—without the swastika symbols but retaining images of Adolf Hitler, the owner’s lawyer said Tuesday.

The SoldatenKaffee (“The Soldiers’ Cafe”)—ornamented with Nazi-related memorabilia—was voluntarily shut down on Friday following death threats to the owner Henry Mulyana, who is accused of inciting racial hatred.

The cafe, which has operated in the western Javanese city of Bandung since 2011, has prompted a groundswell of anger from foreigners as well as Indonesians following recent exposure in the English-language media.

Mulyana has met city tourism officials, who said the 35-year-old had done nothing unlawful, his lawyer Rohman Hidayat told AFP.

The cafe will retain its photographs of Adolf Hitler and other Nazi-era memorabilia, Hidayat said, adding that Mulyana sought to relocate within Bandung and start a broader World War II cafe. He did not say when the cafe would be reopened.

“So there won’t only be photos of Hitler, but Winston Churchill and Indonesian heroes too. There will be Japanese soldiers, not only German soldiers, and no swastikas,” he said.

“The authorities said the swastika was striking, easily recognisable and visible, so we’ve submitted a written statement to authorities agreeing to take them down.”

The cafe, which takes its name from a popular hangout in Germany and occupied Paris during World War II, had operated for two years with little opposition and attracted positive reviews in local media.

But once exposed in the English-language Jakarta Globe daily and international media, a wider group of critics from various countries emerged.

The Simon Wiesenthal Center, a Los Angeles-based Jewish organisation, said it wished to express its “outrage and disgust” over the cafe and described Mulyana as a “bigot”.

Mulyana, who could not be contacted Tuesday, has maintained that he never wanted to evoke memories of the Holocaust and that the images and paraphernalia were just decorative.

“I’ve received countless calls and death threats from locals and foreigners,” he told AFP on Sunday.

“I feel traumatized and shocked.”

Ninety percent of Indonesia’s 240 million people identify themselves as Muslim, making the country home to the world’s biggest Islamic population.

The Jewish populaton is comparatively tiny but historians have blamed poor schooling for the lack of awareness of the Holocaust in Indonesia.