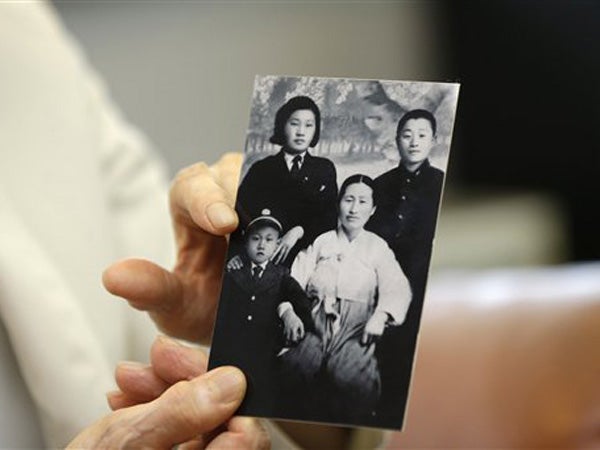 In this photo taken on Wednesday, July 17, 2013, South Korean man Cho Il Woong, 81, shows his family photo in North Korea during an interview with the Associated Press in Seoul, South Korea. About 20,000 North and South Koreans had brief family reunions—most in person and some by video—during a decade of detente, but those ended in 2010 when tensions rose again. AP

GYEONGSAN, South Korea— Hong Jong Soon gazes out her window for hours each day, past a small garden where sesame and red peppers grow, past an iron gate and low wall, hoping to witness the return of a man she hasn’t seen or talked to in 63 years.

Her husband disappeared after being conscripted into the South Korean army in 1950, taken, she believes, to North Korea during the chaos of the Korean War, which ended 60 years ago Saturday. Hong, who never remarried, lives in the same place they shared as newlyweds, because she doesn’t want him to get lost when he comes home.

“I won’t have any regrets if I can see him before I die, even if it’s only just once,” the 88-year-old woman said in a faint voice during an interview this week at her home in Gyeongsan, a small city about 330 kilometers (205 miles) southeast of Seoul.

Six decades after the fighting stopped, elderly Koreans separated from their loved ones face an agonizing question: Will they see their relatives on the other side of the divided peninsula before they die?

Millions of families have been separated since the 1950-53 war, which saw huge movements of refugees in both directions. Most don’t even know whether their relatives are still alive because the two countries bar citizens from exchanging mail, phone calls and email.

About 22,000 North and South Koreans have had brief family reunions — 18,000 in person and the others by video — during a period of detente, but they ended in 2010 when tensions rose again. A proposal earlier this month to discuss resuming reunions quickly fizzled.

“The little bit of hope I had was shattered,” said Cho Il Woong, 81, who left behind his mother, sister and brother when he and his father fled to the South to avoid being drafted into the North Korean army. “People say time cures everything. Time has passed, but it hasn’t cured anything.”

Time is running out too.

South Koreans who want to meet relatives must apply for a permit, and applicants are then chosen by lottery. The South Korean Red Cross, which administers the program with its North Korean counterpart, is still accepting applications, even though the program has been suspended for three years.

The Korean Peninsula remains technically at war because the two sides signed an armistice, or truce, but there’s no formal peace treaty. Family reunions were one of the major inter-Korean cooperation projects that occurred during the detente, beginning two months after a landmark summit between the leaders of the two Koreas in June 2000.

Each of the reunions brought together weeping family members who embraced each other, desperate for details and news. They were separated again a few days later. No Korean has received a second chance to meet their relatives, according to South Korean Red Cross officials.

The dramatic scenes, which were shown on television, also affected those like Hong who weren’t chosen in the lottery.

She and her husband, Park Jong Won, married in 1943 at the age of 18 in a match arranged by their families. She saw him briefly before their marriage, when he dropped by her home with a relative. “I felt good,” she said. “Everyone in our neighborhood thought he was handsome.”

During the interview this week, Hong looked at a black-and-white photo of her husband dressed in a jacket and tie. By her side, her gray-haired and bespectacled son said his mother has often told him that his father was quiet and liked to drink and eat with friends.

Park was a university student when he was conscripted in August 1950, two months after North Korea invaded the South. Hong had no word about him until one of his friends showed up at her village after the war and told her that he and Park had been held at a prison camp, either in China or North Korea, according to the son, Park Yong Ho, who was five when his father went to war.

Hong travelled around South Korea, looking for anyone who could tell her more about her husband’s fate. She visited famous fortune tellers and shamans, stopping only in the late 1950s after a fortune teller she considered reliable said that her husband was living well in the North.

She turned her attention to raising her two children as a single mother, but her son said he often saw his mother cry alone in her room. She earned a living by growing and selling mulberry, apple and peach seedlings, and sent both her children to university, an uncommon occurrence at the time, said the son, a retired veterinarian.

Hong’s family said she became seriously ill after watching a weeks-long South Korean television program in 1983 about separated family members. Her longing for her husband has deepened with age, her son said, because she knows she doesn’t have long to live.

He said the family began holding traditional annual memorial services for his father, starting five years ago, partly as an effort to get Hong to stop waiting for him. But his mother refuses to attend the services.

Hong has repeatedly told her son not to sell the family’s orchard, so it can be given to his father when he returns home.

She says it doesn’t matter that her husband would see a face furrowed by old age if they’re reunited, a face far different than that of the dark-haired woman in a traditional Korean dress he last saw. It doesn’t matter to her if he’s remarried.