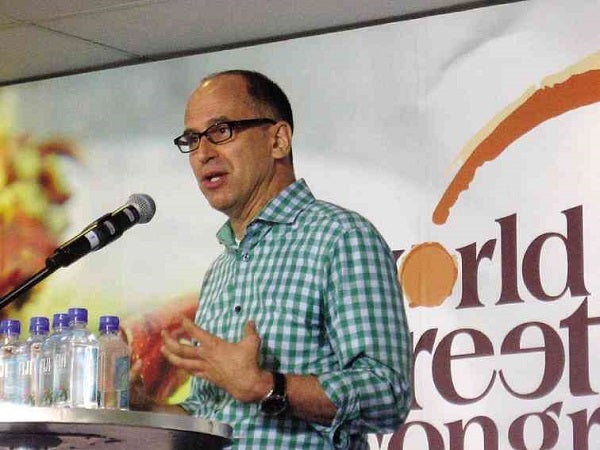 Saveur Magazine editor in chief and ‘Top Chef Masters’ judge James Oseland on street food, ‘eaterships,’ and how much he loves ‘bagoong’

Everyone who has read Saveur, widely considered as America’s most critically acclaimed food magazine, will be familiar with the Saveur 100. It’s the magazine’s authoritative, highly democratic annual list of food, drinks, places, personalities and food-related finds—running the gamut from fine dining to holes in the wall to food carts.

The latest Travel Edition, for example, features the chaotic La Vega Central Market in Santiago, Chile; the city of Hue, Vietnam; and Minnesota chef Lenny Russo, among others.

It was such a delight then to meet, among the speakers at the World Street Food Congress last June 3 and 4 in Singapore, Saveur’s editor in chief, James Oseland, also popularly known nowadays as an erudite judge on TV’s “Top Chef Masters.” Under his editorship, the magazine has won more than 35 awards, including numerous James Beard journalism awards.

Oseland was born in Mountain View, California, where he remembers growing up on such tasteless wonders as frozen dinners. He was a student at the San Francisco Art Institute when an Indonesian friend invited him to vacation in Jakarta. Thus began a love affair with Southeast Asia that hasn’t ended.

His 2006 book, “Cradle of Flavor,” is about the years he spent in the region, and was named one of the best books of that year by Time Asia and The New York Times. He has authored cookbooks for Saveur, and previously worked as an editor at Vogue, Organic Style, the Village Voice, and Mademoiselle.

The openly gay Oseland lives in New York City with his husband, Daniel, and has also written witty, incisive stuff on being gay in the predominantly macho world of chefs and food.

Upon meeting the Philippine delegation at the Congress, Oseland amiably called himself an “honorary Filipino,” having first come to the country years ago for a story, following a team of Swiss scientists around Southern Luzon as they extracted flavors from local fruits.

Also, because of many Filipino friends in the Bay Area—he says “Pwede na!” with ease—he revealed that he actually has a tita he calls whenever there’s a Filipino food question that crops up at Saveur.

Kare-kare is no longer funky for me at all! My friend Amelia and I, for one American Thanksgiving, we once made only Filipino food—I did 90 percent of the cooking. I can do an adobo, a pinakbet; I love bagoong, seriously! A good-quality one has so many layers of flavor. In my own cooking, I take Filipino ingredients, like using bagoong for an Italian caponata; it turns into something lovely.

What comes to mind when you say “street food?”

Char kway teow (Malaysian stir-fried noodles). In the Philippines, it’s the turo-turo—the ladies all over the place with steel pots, food that is the perfect Filipino street food.

What do you think about regulation? Will it destroy the essence of street food?

You win some, you lose some. I understand the necessity to create parameters for reasons of health, larger sanitation. An interesting point made earlier was about the water supply in Singapore, and how easily it can be contaminated. There are all sorts of valid and pressing reasons for regulation; however, I think it can be taken too far.

One thing I’ve noticed is that, sometimes, when regulation is too strict, the cooks become a bit hostile and feel pinned down, and it shows in the food. My feeling is that basic human instinct is regulation enough. You can get carried away. Tony Bourdain was talking about it earlier; people aren’t going to keep coming back to one great hawker stall to get sick.

What do you feel about food courts?

That’s interesting, because in the America I grew up in, “food court” were two dirty words. Like a food apocalypse—no taste, no soul, no nothing, something completely denuded of its foodness. However, what you see in Singapore, in Manila, in Tokyo, in shopping malls and department stores, even the American idea of a food court has been taken to a much more sophisticated and delicious level. There is definitely an elevation of the food court. It’s not the New Jersey turnpike anymore!

You’re very much into organic food. Where does the sustainability come in?

I spent years in Indonesia and South India. What would be idealized in New York or the Bay Area as being locally grown, pesticide-free, this idealized vision of sustainability—you go back to some rural village in Central Java, in the Southern part of the Philippines, or South India, and that’s basically what you’ll see and practice, without the price tag, and it’s been going on for thousands of years because it hasn’t been corporatized.

I think it’s wonderful that in the States there’s some kind of turnaround, and there is a reversal of the terrible food I grew up eating, which was pretty much like factory food. Street food is organic at its best.

What about the idea that street food is a threat to the mainstream food industry?

Like everything, whether you’re talking about a small-scale model or an enormous multinational corporation, what is commercially effective is effective at both levels. Like one lola having a successful business where she creates beautiful food in her kitchen with her granddaughter and brings it to some street outside a market, or a very clever Western corporation taking the idea of street food and making money from it.

At the end of the day, you’re talking about two successful business models, whether it’s $25 or $25 million. They don’t have to be mutually exclusive.

Do you think your exposure to Southeast Asia informs the way you approach your work?

Definitely. My counterparts ended up going to France and London; I ended up in Jakarta, Singapore, Bangkok and Manila. Definitely because of that, I have a different orientation from the average American food magazine editor. I’m more Eastern, shamelessly. There’s better food here! It’s as simple as that!

The Saveur 100 is such a delight because it’s accessible—you cover everything from fine dining to street stalls.

Our goal is not to pass any judgment, not to say that you must only eat in a Paris three-star restaurant. In every square inch of what we try to do, even in all our digital incarnations, we want to celebrate the gorgeous commonality of eating. We don’t just say that this is $300 a plate, so this must be good. That’s not true—good food is good food.

Has anybody disagreed with your list, or told you that you were wrong?

Not on my watch!

Has the readership of food magazines changed over the years?

Demographic research says that our reader is 35 or older, high-income bracket, extremely educated. But my experience in traveling abroad is, a lot of people read this magazine who don’t come from this idealized demographic. It’s people who are interested in food, and that cuts across.

Yes, we are a food magazine first and foremost, and our recipes are very important to our work, but even more important, and at the heart and soul of what we do, is that we’re a magazine about how people live in this very specific way surrounding eating.

We’re a magazine of human culture through food. We’re National Geographic with recipes!

You’ve written that the food industry, with all these rock star chefs, is a pretty macho industry. You still feel that way?

The idea of it being some specifically masculine or celebrity thing does sort of disturb me a bit. Cooking is for all people. And when you think of thousands of years of continuous history, it has always been this grandmother with her daughters and sisters in the kitchen. Commodifying something so essential to human life into some sort of rock ‘n’ roll thing really bugs me.

On “Top Chef,” though, the integrity those people bring to that program, to the two days it takes to shoot one episode—it’s really wonderful, and honorable. Well, maybe that’s why I was invited to be on this show, because I have such different backgrounds, from Java to New York City. Good cooking is good cooking.

So why do you think Filipino food hasn’t taken off globally like, say, Thai food has?

I’m an enormous, natural fan of Filipino food, but it gets such limited exposure. There’s some kind of shyness about exposing it; maybe there could be a very concerted effort to expose different “eaterships” to Filipino food. One of the amazing things about it is the vast regional diversity; it changes every 50 miles. But I really prefer Filipino grandma cooking.

What is James Oseland’s comfort food?

My husband is Brazilian, so it’s garlic beans and garlic rice, with fried egg. And everything tastes better when you’re eating with your hands. Alya B. Honasan