A global food trip like no other | Inquirer Lifestyle 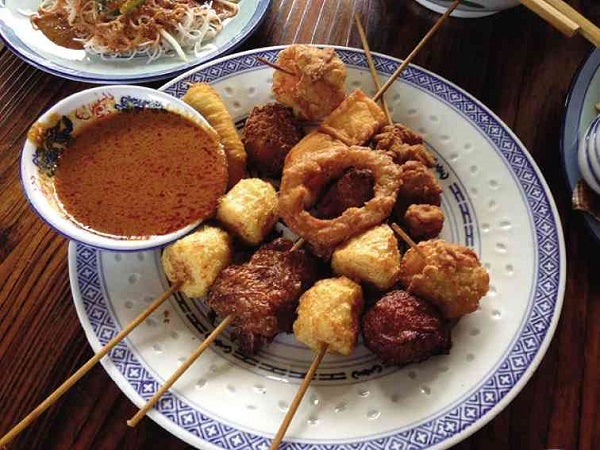 Okay, if you’re the type who won’t touch fish balls or taho for fear of food poisoning, then move on to the restaurant reviews.

But if your idea of good food is a hawker stall in Singapore or Bangkok, a turo-turo beside some rural Philippine bus stop, or even a more trendy food cart selling funky falafel in Manhattan, NYC, then you could have died and gone to heaven at the World Street Food Congress, held last June 3-4 at the F1 Pit Building and Paddock in Singapore.

“I never get sick eating street food,” declared celebrity chef, author and charismatic TV host Anthony Bourdain, who kept the audience enthralled with his hilarious speech to open the event. “If there’s a line of locals, I’m gonna eat there. They are not in the business of poisoning people.”

He has no qualms about sitting in holes-in-the-wall aerated by bus fumes, either; after all, “Poverty is the great engine of gastronomy. It takes deprivation to make chicken feet into something good.”

Bourdain didn’t hide his apprehension that too much regulation might destroy the essence of street food, and recalled what may have been the worst meal he ever had, “an awful cheeseburger in a middle America airport. The cook didn’t care; there was no relationship. When someone cooks for you, anywhere in the world, there has to be an intimate exchange.”

He also touched on street food as an entrepreneurial option for the future, as opposed to high-capital “brick-and-mortar” establishments.

Bourdain was joined by a stellar cast of food experts from different fields during the World Street Food Dialogue. James Oseland, editor in chief of Saveur Magazine and a judge on TV’s “Top Chef Masters,” spoke about being a kid from a “sanitized background” who found his way into food media (see sidebar interview). Pauline Loh, managing editor of the humongous newspaper China Daily, said emphatically, “What will kill street food? Fat children clutching their McDonald’s!”

Daniel Wang, Singapore’s former Commissioner and Director General of Public Health, was the man who organized Singapore’s street-food vendors into 105 of what may now be the cleanest hawker centers in the world, a mammoth undertaking he began in the 1960s, after the threat to Singapore’s water sanitation was becoming serious.

Danish chef Claus Meyer, the man behind Noma, one of the world’s top restaurants, succinctly said, “Street food is food with no bullsh-t.”

Thai Iron Chef Ian Kittichai, who runs several restaurants all over the world, recounted how he himself went from street vendor to being the first Thai executive chef of a five-star hotel chain in his country.

Following Bourdain’s belief that street food is born of crisis, we asked Brett Burtmeister— managing editor and co-owner of Food Carts Portland, the acknowledged birthplace of the hot new American food-cart craze—whether the recent US crisis has led to a surge in the trend. “Yes, several of them talked about being laid off or not finding any work. It was much easier to use your credit card to buy a trailer and open a food cart than to open a restaurant.”

Meanwhile, Arbind Singh, coordinator of the 5,000-member National Association of Street Vendors of India, genuinely wondered what he was doing there, as he wasn’t too knowledgeable about food per se. Instead, he works for social justice, organizing vendors and pushing for laws and policies to protect their rights and have them recognized by the authorities.

“Being a street food vendor is a very entrepreneurial activity, and training ground to help people go up the ladder. It’s better than a bad job,” he said.

The moving force behind the whole event was the ebullient and omnipresent KF Seetoh, founder of Makansutra, organizer of the World Street Food Congress. Hailed as “Singapore’s Food Ambassador,” the TV host, author, businessman and foodie lamented how “people are clueless about this wonderful street food culture. These hawkers are keeping the fires and embers alive. It’s providing good jobs, start-ups for entry-level entrepreneurship, opportunities for the disadvantaged, and social enterprise. There’s culture, joy—how can you not love this?”

He likewise sought the middle ground when it comes to regulation. “I don’t think dirt will add to the experience. And I don’t mind going to a shanty and squatting there beside a fuming bus if the guy who cooks practices good hygiene,” he said.

The challenge, Seetoh agreed, is encouraging new tastes while preserving tradition. “Street food is evolving. Wherever we go, we always adapt to local styles. What this will evolve into is a big question. You have to keep your authenticity, but also be open to the new. You’re only limited by your imagination, but it must still be fast, cheap, good and clean—the precepts should be there,” he said.

Asked why he is such a foodie, Seetoh retorted: “Who isn’t? I discovered the stories and opportunities behind the food, so I became a more passionate foodie. I’m just creating awareness.”

Later, during the forum, when asked what his last meal on earth would be, he replied, “A bowl of plain white Chinese porridge with fermented tofu, peanuts and pickles.” And what he wants written on his tombstone? “Chicken rice!”

Other than the talks, several journalists also enjoyed interesting side trips. One of them was lunch at the slick 2am:lab of Singaporean international chef Janice Wong, a soft-spoken wisp of a girl with a tremendous culinary imagination. After earning her Masters in Economics, she chucked corporate life to study cooking at Cordon Bleu, and worked with such restaurants as Per Se in New York and Arzak in Spain.

She whips up her sweet wonders, including a famous treat, H2O Chocolate, where she mixes the chocolate with sparkling water at her own 2am:dessertbar.

Wong’s assignment was to make us a meal incorporating favorite Asian street delicacies like laksa (spicy, curry-based noodle soup), which she made into edible paper, and kaya jam, which she incorporated into a dessert with eggs, tapioca and gula melaka (palm sugar).

Her most ingenious creation, in my book: tom yum cotton candy, which burst with the spicy flavors when the sugar melted in the mouth.

I made a beeline for the seafood satay counter, where an amiable “uncle” assembled plates of goodies for us, to be eaten with a peanut sauce.

We also visited the Tiong Bahru hawker center, which had existed for 50 years before the government upgraded it in 2004 into a three-story, SG$16.8 million complex with a wet market, parking and 83 cooked food stalls.

Another delightful stop was afternoon snacks at the iconic Ya Kun Kaya Toast, a Singapore institution founded in 1944 by Chinese immigrant Loi Ah Koon. His son, Adrin Loi, invited everyone to order “whatever you like” at their shop, where things are still done the old way, including having your kopi orders (they come in a wide variety that can rival that of modern coffee bars) yelled out loud.

Kaya toast is brown bread toasted to a crisp over a grill, then spread with kaya jam, which is made of eggs, sugar, coconut and pandan. Loi had us try it the authentic way—with “runny egg” seasoned with soy sauce, salt and pepper that you slurped from a bowl.

And then there was Dignity Kitchen, run by ingenious businessman Koh Seng Choon, who employs disabled and mentally challenged people to operate his food court. “Do you see any disabled in Singapore’s shopping centers?” he asked. “Here, every mother or father will try to hide them. So they have nothing to do.”

Although none of his own children are disabled, Koh was so moved by the plight of those he met that he gave them opportunities to be productive. There’s even a sign language guide near the cashier so you can tell a deaf cashier what you want.

The biggest treat, however, was the World Street Food Jamboree, which featured some 37 food stalls from all over the world. Guests received coupons to pay for whatever they wanted to sample. My first choices: a fish taco from Tacombi, originally sold on the streets of New York from a Volkswagen Combi (hence the name); and a dish close to my heart, bhelpuri, an Indian savory snack with tamarind sauce, crispy rice, potatoes and chopped onions, served by Mumbai’s India Gate Bhelpuri.

Other goodies perfect for a non-meat-eater like me were the nonya mee siam, thin vermicelli in a sauce of tamarind, spice paste and fermented soya bean and topped with prawns, from Donald and Lily of Malacca; and delicious Thai oyster and seafood cake from Hoy Tord Chao Lay.

Washed down with a glass of cold teh tarik (pulled tea with milk), the meal left us Pinoys full and happy—and marveling at how the simplest, humblest food can indeed make the best meals.