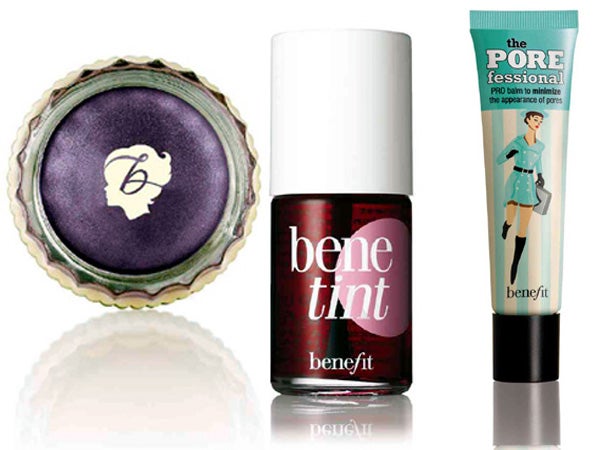 When one claims to be an “instant fan” of a particular makeup product, it may be prudent to take heed.

It’s quick to gauge if a makeup product delivers as it promises, unlike skincare which may take weeks to see quantifiable results if, indeed, it can zap wrinkles on your face.

It took this writer one try of the soon-to-be-released Benefit Stay Flawless 15-hour Primer to become just that: an instant fan. And just to be clear, with the number of products that fall on my lap every day to test and try, I’m not easily swayed by fancy, too-good-to-be-true names and promises on labels. In fact, precisely because of the amount of information I have on my hands, I’m very likely more cynical than the next consumer.

And so it was with some amount of skepticism that, one afternoon, I unwrapped the above-mentioned primer stick from its silver-and-white box, one side of which bore a list of its promises according to consumer tests: “94 percent said it helps foundation last longer; 97 percent saw an improvement in the look of skin/complexion.”

I don’t ask for much. In this humidity, I just need something that won’t make me look like I slathered butter on my face before leaving the house.

It takes a little practice to use the primer correctly. My first try was a near failure: I took my sweet time to apply the foundation after swiping the primer on my face that the latter had quickly dried; applying the liquid makeup over it became impossible. (Mental note: Read the label.)

I washed my face and tried a second time, with better success. (I learned it was better to do the face in sections.) After an entire day of doing my usual routine, my makeup was still intact at day’s end, with no powder retouching in between. I had stumbled on a good thing!

I’ve been a longtime fan of the Benetint, that iconic cheek and lip stain that was famously created by the Benefit founders as a nipple tint for an exotic dancer. But admittedly, I had only just rediscovered the brand when it opened its first store in the country in December 2011.

Since then, I have used the Porefessional, that pore-minimizing balm that’s like magic to us who are immensely insecure of the massive craters on our face otherwise known as pores. (On a Benefit makeup artist’s tip, I now also use it as a discreet oil blotter—just whip out the tube; no more piling on the face powder throughout the day!)

And Benefit, indeed, is about quick fixes. If you need instant satisfaction, this is the go-to makeup brand. “Unlike other brands, we’re not as big on color,” says Aubrey Bautista, the brand manager whose title on her card is “chief fun officer.”

The San Francisco, California-founded company’s mantra is that makeup shouldn’t be too serious. The spirit is fun and girly—it’s not unusual to find the shop staff and makeup artists in costume on random days.

I can also swear by Posie Tint and Cha Cha Tint as great alternatives to Benetint; the colors don’t budge and stay on your skin all day. The Cha Cha Tint is particularly flattering on morena skin tones.

Benefit believes the Stay Flawless 15-hour Primer and Gimme Brow, to be rolled out on Aug. 15, will soon be joining its top sellers. Gimme Brow is a brow fiber gel that makes brows “magically appear.”

Benefit Cosmetics, now owned by the conglomerate LVMH, is also relaunching its Color By Benefit, a line of lipglosses (Ultra Plush) and eye shadows (Creaseless Cream and Longwear Powder), as well as a selection of trial-size sets and gift sets.

This week, the brand unveils its fourth boutique at SM Mall of Asia, and another one in TriNoma in August. The MOA boutique will be the biggest in the country, and will offer its full waxing service.

Benefit’s Brow Bar is popular among male and female consumers. The service is offered in its boutiques at Greenbelt 5, Rustan’s Shangri-La Mall and Rustan’s Grand Mall in Makati City.