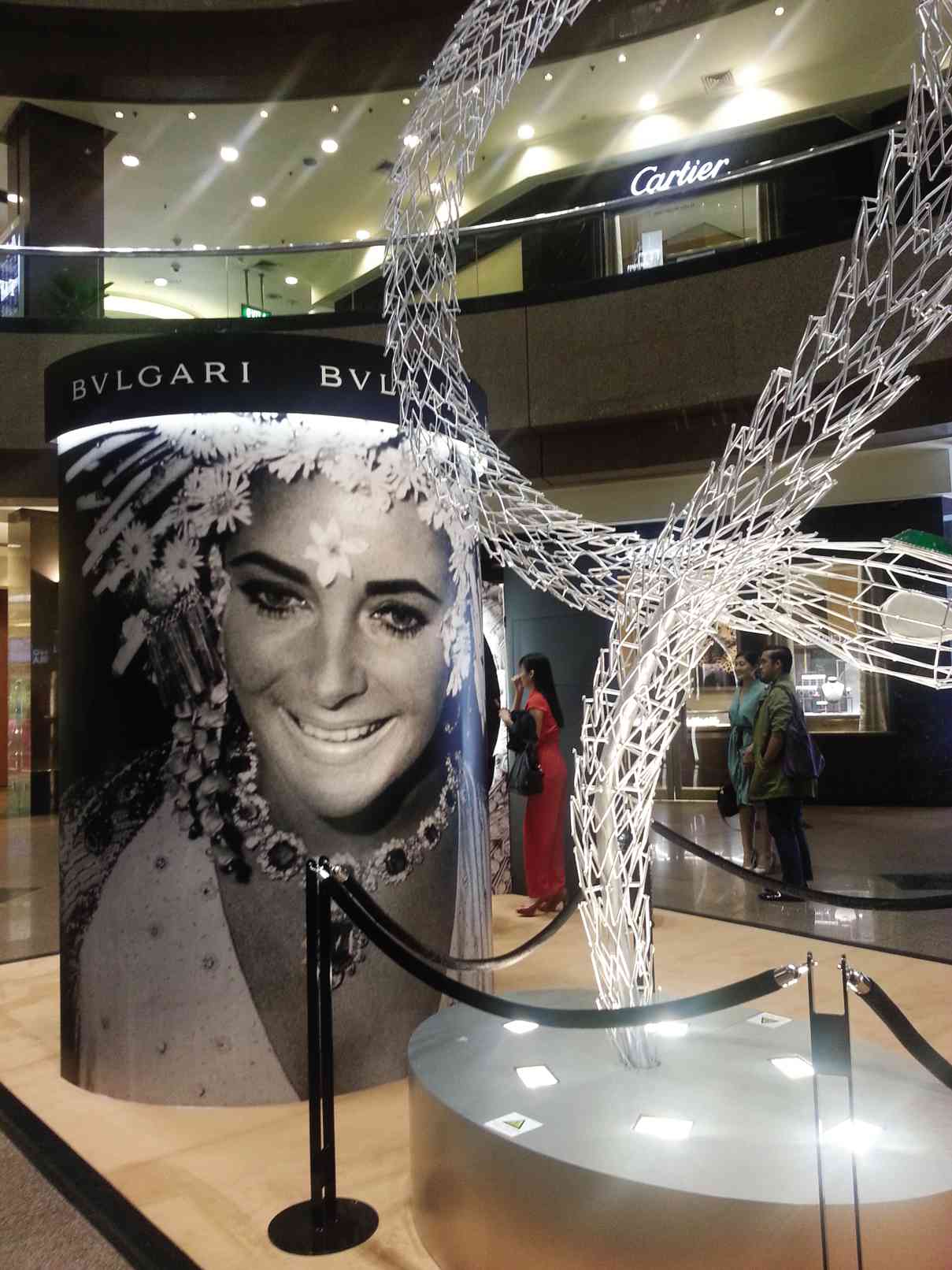 Did she have sleepless nights, we asked Amanda Triossi, Bulgari Historical Archives curator, about what it was like to bid for the famous jewelry of Elizabeth Taylor.

Not really, she said. “But we didn’t know until the very end if (winning the bid) came with rights to the images.” And having the rights to use photographs of Taylor wearing her famous Bulgari was, of course, critical to the purchase of the Hollywood icon’s jewelry.

Bulgari was given the rights as well, and so the much publicized winning bid came to be in 2011.

It was apparent that early on, Triossi knew which among Taylor’s jewelry Bulgari would buy back from her estate, based on the significance of their design and their place in Taylor’s colorful life.

The iconic Elizabeth Taylor Bulgari jewelry—eight pieces of them—was on exhibit, until last week, in a secluded corner at the Bulgari store at Takashimaya in Singapore. Most of these were gifts from Richard Burton, the Mark Anthony to Taylor’s “Cleopatra” in the famous movie, one of the world’s greatest actors, and twice Taylor’s husband.

Two weeks ago, Triossi presented these famous baubles, narrated the stories behind them, and walked the media through other heritage jewelry pieces on display, which were seminal in the evolution of Bulgari design in the last century.

The Bulgari Eternal Jewels Heritage exhibit was at Takashimaya in Singapore until July 16. We just happened to be in Singapore that week and made time to attend the exhibit opening, to see again Taylor’s famous jewels. (Some of them were included in Bulgari’s Retrospective Exhibit, “125 Years of Italian Magnificence,” in Rome in 2009.)

We were curious to know just which of her Bulgari jewels the Italian jewelry institution felt should be bought back and included in its prestigious heritage collection.

After Taylor’s death, Bulgari bought back some of her famous Bulgari jewels in 2011 in New York at the Christie’s auction of Taylor’s jewelry, fashion, decorative arts and film memorabilia. The auction raised an unprecedented sum of $156,756,576 according to a New York Post report, with the items fetching five, 10 or even 50 times their estimated value.

The auction set the world record for most valuable sale of jewelry in auction history. According to Time Magazine, the Taylor jewelry sold for a staggering $116 million, breaking records for a single collection set in 1987 by the Duchess of Windsor’s jewels.

The New York Post report claimed that the Bulgari acquisition amounted to $20 million. (The Bulgari executives in the Singapore exhibit opening declined to give the sales figure.)

However, it’s not only the monetary value that made this acquisition newsy, but also the design and personal history of the pieces.

Triossi pointed out that, in terms of design evolution, so notably Bulgari was Liz Taylor’s sautoir, which the actress received on her 40th birthday in 1972. It has a huge Burmese cabochon sapphire (52.72 carats). Bulgari could claim that, created in 1969, it was a first of its kind—mounted in platinum, instead of yellow gold.

Through the century, cabochon has been the favored design of Bulgari, for its roundness and sense of volume, in contrast to the regular angular cut.

However, easily the most photographed of the Taylor jewels is the emerald necklace and pendant set. This was on display in Singapore. Originally, the pendant was an emerald brooch Burton gave her to mark their engagement in 1962. Created by Bulgari in 1958, it’s a step-cut Colombian emerald of 23.44 carats.

She turned it into a pendant of the emerald necklace Burton gave her as a wedding present in 1964—six step-cut octagonal Colombian emeralds, 60.50 carats in all, each emerald surrounded by brilliant-cut and pear-shaped diamonds.

Taylor wore this set in Helmut Newton’s famous photograph of her in her swimming pool in his coffee table tome. Taylor was a mature Hollywood goddess by then, and as Triossi noted keenly, while the actress had lost her youth and innocence, her allure remained strong as she stared out of that book cover, helped in part no doubt by her dazzling bling.

It was also the emerald set she wore when she received an Oscar for “Who’s Afraid of Virginia Woolf?”

Burton knew only too well Taylor’s fondness (a mild term) for Bulgari. In the resplendent Bulgari 125th Retrospective Exhibit in 2009, prominently written on the scrim were Burton’s famous words: “I introduced Liz to beer, she introduced me to Bulgari.” On another occasion, it is said, Burton was quoted, “The only Italian word Liz knows is Bulgari.”

It is also said that the filming of the milestone movie “Cleopatra” in Rome held meaning for her, not so much because it paid her a million dollars (highest contract at that time in the ’60s) or that the romance with Burton started on the set, but because it brought her in good proximity to the Bulgari store.

The Singapore exhibit included the first Bulgari jewel Burton bought for Taylor—a seven-carat ring. In 2002, as Taylor led the celebrities’ advocacy for an AIDS cure, she sold this ring in an auction to raise funds for AIDS awareness. “As far as I remember, this is the first jewel I received from Richard. Please wear it with love,” she wrote in a letter to the ring’s would-be buyer.

Burton, indeed, knew where to buy his jewelry—and for whom. In that exhibit tour we were told that he once bought a Bulgari emerald ring, which the store presumed was for Liz Taylor, with whom he was having a budding romance. In the next few days, who should walk into the store? Sybill Burton, the wife of Richard, from whom he wasn’t divorced yet; she wanted the stone reset.

Equally dazzling and transfixing were the heritage jewelry pieces displayed around the store to represent the evolution of the Bulgari design, which was the goal of the exhibit in the first place. There were necklaces, bracelets, earring, brooches and, of course, watches.

Founded in the late 19th century by Greek silversmith immigrant Sotirio Bulgari, Bulgari started with Greek and Roman art design. It opened its first store in Rome, on Via Condotti, where it still is. This was in the early part of the century when, Triossi noted, Italy looked to France for design influence.

A turning point after World War II was the Serpenti watch—which combined the watch with the Serpenti motif. It was a masterpiece of design, craftsmanship and technique that has come to be the trademark of Bulgari. The Serpenti is a tubular chain achieved without soldering, its interlocking bands of gold so labor-intensive.

To fashionistas, the Serpenti is notable for how fashion legend Diana Vreeland wore the Serpenti belt as a necklace wound around her swan-like neck. That’s an iconic photograph of her. Such a Serpenti belt/necklace was in the Singapore exhibit.

Vreeland had always challenged traditions, be it in fashion or photography. She built the Vogue institution by making jaws drop, it seemed. She lived for grandeur—even in accessorizing. It was said that when she started wearing Serpenti belts/necklaces, she asked her staff to wear snake accessories as well. She wanted to see snakes everywhere.

Another Bulgari signature jewelry on display is the Tremblant—brooches and earrings that move; they’re floral stones mounted on springs that move with the wearer’s every movement. It’s a technique used as early as the 18th century in French jewelry, but Bulgari’s bold use of color stones in the ’50s and ’60s lent new vigor to this technique. In the ’50s, the Tremblant was big among European women.

Bulgari paved the way for the bold mix of colored stones. Up until then, diamonds were usually mixed with only one color stone. Bulgari fearlessly blended emeralds, rubies, amethysts, sapphires—a design innovation that was perfect for the Giardinetto (“little garden”), a brooch of a vase of flowers in various hues.

The Serpenti, Tremblant and Giardinetto were on exhibit. They are among the design landmarks that prompted a French woman journalist to say, in the ’60s, “You can recognize a Bulgari jewel just as you can a Chanel suit.”