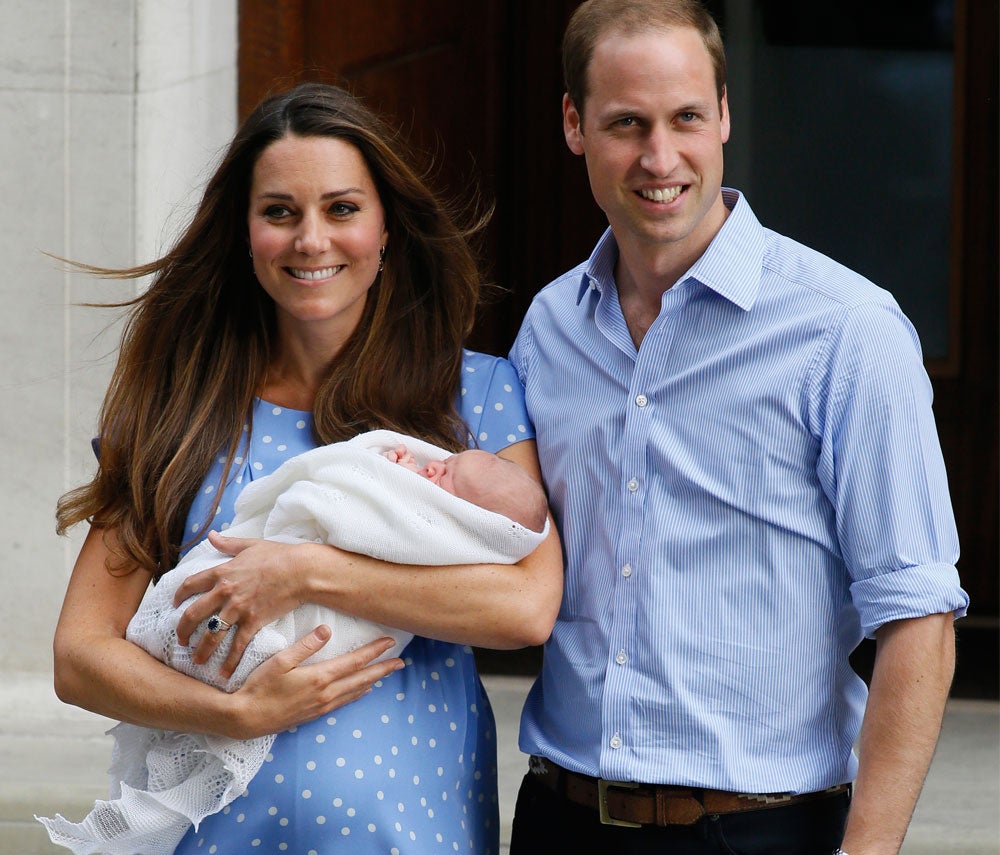 In this July 23, 2013, photo, Britain's Prince William and Kate, Duchess of Cambridge pose with the Prince of Cambridge outside St. Mary's Hospital in London where the Duchess gave birth on Monday, July 22. Princess Diana wore a caftan-like outfit that hid the post-childbirth tummy bump when William was born. In contrast, the former Kate Middleton, in her first public appearance after giving birth, wore a dress that did not camouflage her belly, and many women are applauding her choice. AP PHOTO/KIRSTY WIGGLESWORTH

NEW YORK—As Kate and William showed off the royal baby, what caught the eye of many women was not the new heir to the throne but the Duchess of Cambridge’s post-childbirth silhouette: that little bump under her pretty polka-dot dress.

“I love that she came out and there was a mommy tummy. It was there! We all saw it!” said Lyss Stern of New York City, who remembers turning down offers of a girdle and diet pills after her first child was born nine years ago.

Stern, whose company Divamoms.com organizes events and product launches, added that Kate was sending “the right message,” in stark contrast to Hollywood celebrities who are shown “three weeks after childbirth with a flat stomach and G-string bikini. That’s not real.”

Even those who make a living getting new moms into shape applauded Kate. “I’m thrilled that she went out there like that, because we never see real mommy tummies,” said Helene Byrne, a personal trainer in Oakland, Calif., who specializes in pre- and post-natal exercise. “When you see a magazine or photos of new celebrity moms, they’re Photoshopped. They’re fake! They’re a big lie!”

The Daily Beast even ran a headline saying Kate’s “unabashed baby belly busts the last taboo of pregnancy.” Indeed, most celebrity new moms don’t have their pictures taken until their tummies are flat again. And while the stars usually credit diet and exercise with making their bodies bikini-ready so fast, gossip and plastic surgeons often cite something else: the popular procedure known as a tummy tuck.

People magazine has an entire online archive devoted to “Body After Baby: Celebrity moms show off shockingly svelt figures after giving birth,” but the magazine declined to comment Wednesday on the example set by Kate. Meanwhile, the summer’s other celebrity mom, Kim Kardashian, has yet to be seen in public. Us Weekly reported that she won’t leave the house untill she’s ready to “debut her post-baby body.”

Nobody can say whether Kate consciously chose to send a message that this is what new mothers really look like, or whether she didn’t realize—or didn’t care—how obvious her tummy would be. Either way, she un-self-consciously handed the baby off to her husband rather than using the newborn to camouflage her figure from the cameras and crowds when she emerged from the hospital Tuesday. And her form-draping dress was a contrast to the caftan-like outfit that hid Princess Diana’s figure when she appeared publicly for the first time after giving birth to Will in 1982.

Nancy Manister, who worked for 20 years as a maternity nurse and now teaches at Fairfield University in Connecticut, even noticed a moment during the photo op when Kate “clasped her hands together underneath the belly, and I thought, ‘She’s not trying to hide it.'” As for anxious new moms wondering when that bump will go away, Manister says, “it takes six weeks to lose 25 pounds, and a full year” to get your old body back.

Jennifer Moneta, who works in public relations in Dallas, gave birth nine weeks ago and was especially pleased that Kate made the post-partum silhouette “look very natural, as if that is what all moms can and should expect after having a baby.” Moneta said that when she left the hospital, “I still looked five months pregnant, even though I only gained 20 pounds during pregnancy.  My father even lovingly kidded me about it, saying ‘I didn’t realize the baby was still in there.'”

‘Is she pregnant again?’

Alison Jimenez, a fashion blogger in Astoria, New York, said she was “outraged” by comments from some Kate-watchers asking things like “Is she pregnant again?”

“This woman has just given birth, what was she supposed to do? Struggle into a pair of Spanx?” Jimenez said.

But some new moms do swear by girdles or their modern equivalent. Josephine Giraci, of Lloyd Neck, New York, says the best piece of advice she got before her first child was born 11 years ago was to pack a girdle in her maternity bag. She wore it for three months after giving birth: “I slept in it and everything.”

One shapewear company, Hourglass Angel, wasted no time Wednesday emailing pitches showing a picture of Kate with the mommy tummy alongside ads for corsets and girdles as a way for women to “regain their body” and “feel even more beautiful.”

Dr. Robert Atlas, an obstetrician-gynecologist at Mercy Medical Center in Baltimore, explained that the “bulge that women have after they deliver” is mostly loose skin and fat. He said breast-feeding can help new mothers lose the weight “due to extra metabolic processing,” but he doesn’t recommend girdles as a way to lose baby weight — though women who have cesarean sections do wear a binder-like accessory around their midsections to support abdominal muscles.

As he spoke, he was with a patient, Melissa Baker, of Ellicott City, Md., who gave birth just a week ago. Asked what she thought of Kate, Baker said, simply, “I liked that she didn’t look perfect.”—Beth J. Harpaz