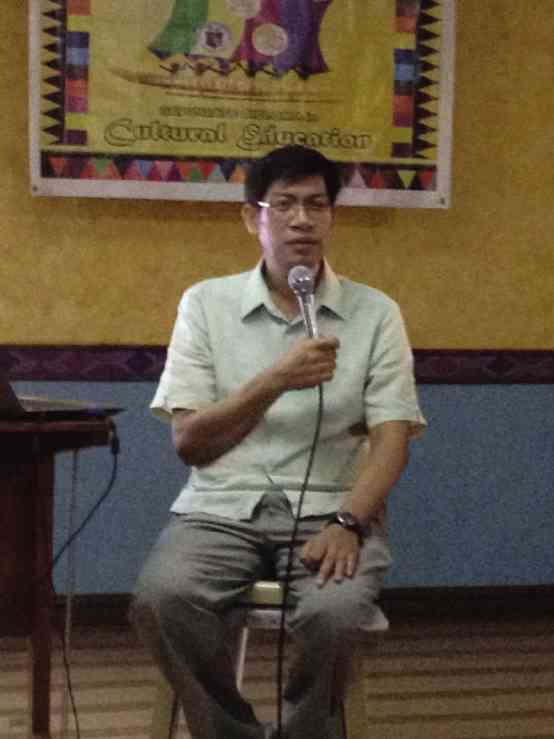 ‘At your Serbis, Elmar Ingles’

“Elmar, look where we are now,” exclaimed Celeste Legaspi onstage when she received her Philstage Natatanging Gawad Buhay! for Lifetime Achievement a few years back. Celeste singled out the Philstage executive director who, aside from overseeing the awards night at the CCP Little Theater, had also convinced a number of reviewers of national dailies and arts professors from different universities to band together to watch and judge the year-round shows of the professional performance groups comprising Philstage.

But Elmar Beltran Ingles, who passed away last July 9 at age 49, was more than that. He was also executive director of the Organisasyon ng Pilipinong Mang-aawit or OPM.

“Elmar taught us how to lobby in Congress,” said Ogie Alcasid, OPM president, at his eulogy. “Without him we soft-spoken artists wouldn’t realize how important it was to take the activist stance to further our cause.”

His biggest contribution will probably be his brainchild as commissioner at the National Commission on Culture and the Arts (NCCA): The Philippine Cultural Education Program that sought to give Master’s Degrees in Education, Major in Cultural Education, to deserving DepEd teacher-scholars. The program was his masterstroke; it entailed hammering out agreements not only with the Department of Education but also with institutions of higher learning all over the country.

In his last years, Elmar had become the consummate arts manager—akin to a character in a play who would burst into a scene and alter the direction of the plot.

But just as swiftly, he was gone.

Elmar certainly knew his theater, for he was trained early on as a playwright. He used to recall that Manila was never in his sights while growing up in Quezon.

“The goal was to go to college, and that was the University of the Philippines in Los Baños,” he once told friends. He went to UPLB in the waning years of Martial Law where, needless to say, he became a student activist.

An invitation in 1983 to a UP Diliman arts workshop sponsored by Lean Alejandro’s Student Council was his ticket to Manila. There he joined a playwriting workshop facilitated by Rene Villanueva.

Telon would last for seven years, honing young playwrights through workshops and productions of new plays. Elmar was the last president of the group. He was, however, unable to write a play while at Telon.

“The muses did not return when we abandoned them momentarily for other pursuits,” noted Villanueva in his memoir.

Elmar also quit school, but went on to bigger things at the Cultural Center of the Philippines, OPM, Philstage and NCCA.

“He was smart and had bigger and bigger plans,” says Baquiran, his best friend in Telon. “And he always found his way to institutions that would realize them.”

Some two decades later, Elmar returned to his first love, playwriting, and proved his mentor wrong when he penned the one-act play on small-town corruption, “Serbis.” It is now part of theater lore as it was produced and staged at the very first Virgin Labfest.

When the long-overdue anthology “Telon: Mga Dula” was launched in 2011, it included “Serbis.” And when the anthology won the National Book Award last year, Elmar was on hand to receive the award and give the acceptance speech.

“We at Telon dedicate this award to our mentor, the late Rene Villanueva,” he said.

Proud of his accomplishment as a playwright, he always made it a point to dedicate copies of the book with: “At your Serbis, Elmar Ingles.”

He might as well have been describing his commitment to cultural work, which reached the greatest number of artists and audiences.

Playwright Tim Dacanay is editor of the anthology “Telon: Mga Dula” and chairperson of the De La Salle-College of St. Benilde School of Design and Arts.