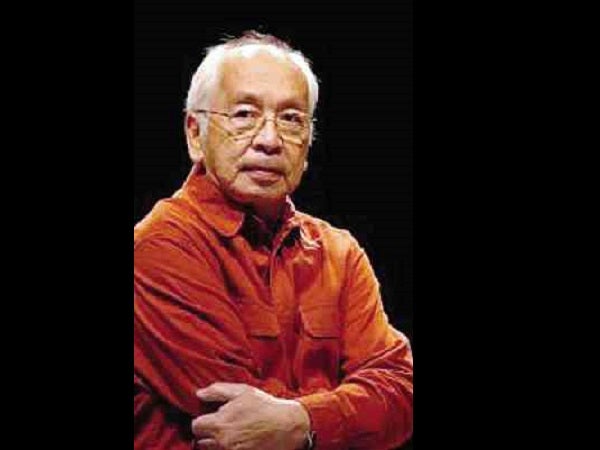 Tony Mabesa–lion of the theater 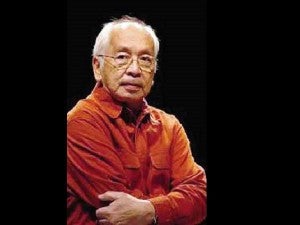 The Japanese military banned Hollywood movies during their traumatic occupation of the Philippines in the 1940s. As a result, Philippine theater flourished. The Avellanas formed the Philippine Artist League, Gerardo de Leon’s troupe performed at the Life Theater in Quiapo, Manila; and Narciso Pimentel staged plays at the Met.

Cinema houses were closed down, but later gave way to these stage productions.

Little Tony Mabesa (born in Los Baños, Laguna in 1935), accompanied by his mother and sometimes by his Lola Chayong, would watch these shows that featured “dancing women, singers, acrobats, animal acts, precocious children and comedians, and capped by a 30 to 45 minute dramatic theatrical piece performed by actors from film, radio and theater.”

At UP Rural High School, young Mabesa suddenly became a director “when Cupid shot an arrow into the heart” of his English teacher, Priscilla Alabado. During a class project, Miss Alabado turned over the directorial chores to the student “apparently (because) she wanted to spend more time with her beau whom she eventually married.”

Mabesa went on to become a director of note, and an actor of stage, film and TV. He is still at it after some six decades. At 78 years old, he has done over 150 plays, and counts appearances in about 100 movies and TV shows.

At the University of the Philippines, his first mentor in theater was the playwright Wilfrido Ma. Guerrero (later a National Artist). Mabesa kept on acting and directing, went abroad for graduate and doctoral studies, and established the Dulaang UP and UP Playwright’s Theater, among other myriad accomplishments.

The choice of his favorite plays, says Mabesa, is dictated by “sentiment, aesthetic merit, and the impact the plays had on my career in theater.”

Count among these Guerrero’s “Wanted: A Chaperone,” all the full-length plays of Anton Chekhov, Henrik Ibsen’s “Peer Gynt,” “St. Louis Loves Dem Filipinos” by Floy Quintos, Schiller’s “Maria Stuart/Maria Stuarda,” the musical “Man of La Mancha” and Nick Joaquin’s “Portrait of the Artist as Filipino.” Plus Shakespeare, of course.

The young Peer Gynt was played by—would you believe—Roderick Paulate, and the four- to five-hour play also starred Jonas Sebastian, Shamaine Centenera and Angie Ferro. It was one of his most ambitious productions.

As for “Man of La Mancha,” Mabesa has directed the play three times, with translation by (National Artist) Bienvenido Lumbera. “The song ‘The Impossible Dream’ never ceases to haunt me,” he says.

“The relationship between a teacher/director and student artist is a delicate one,” muses Mabesa. “Somehow, one’s role as a mentor of a student can be a most rewarding or a most frustrating one.”

Presumably most rewarding for him is the gaggle of top-tier actors he has mentored, led by Centenera, Irma Adlawan, Eugene Domingo, Frances Makil-Ignacio, Adriana Agcaoili, Banaue Miclat, Neil Ryan Sese, among many others.

Filmmakers Chito Roño and Aureus Solito were in his directing class, and he also served as adviser to the theses productions of Chris Millado, Dennis Marasigan, Alexander Cortez and Tuxqs Rutaquio.

“I am blessed to have had an ongoing six-decades-plus career in the theater,” the veteran actor-director says.

For Dulaang UP this September, he is adapting and directing John Webster’s “The Duchess of Malfi” in both English and Filipino, with the Filipino translation done by Allan Palileo.

You can also see him starting Sept. 16 in the new TV5 tawa-serye “Madame Chairman,” starring Sharon Cuneta. Mabesa plays Father Andy. A long way from Shakespeare and Chekhov but, as he says in his trademark basso profundo, “a happy actor is a working actor, and ditto for a director.”