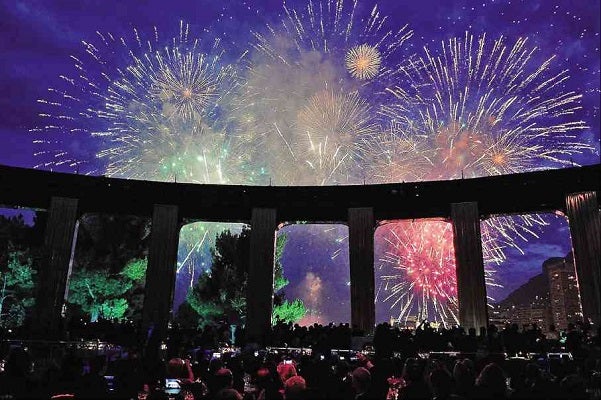 JUNE 5, 2013, Wednesday. We were so excited as we hopped on a helicopter at Nice airport in France. We were on our way to Monte Carlo, Monaco, for the Ernst & Young World Entrepreneur of the Year (WEOY) set from June 5 to 9.

This prestigious event is attended by the who’s who in global business. This year, candidates from 50 countries competed for the coveted award, with our own Jaime “Jim” Ayala, founder and president of Hybrid Social Solutions Inc., representing the Philippines.

As soon as our helicopter landed on the Monaco heliport, we were whisked to the five-star Hotel de Paris Monte Carlo, which would be our home for four days.

After getting settled in a well-appointed ocean-view suite, we moved on to register for the event in the equally fabulous Hotel Hermitage, venue of the WEOY. There we met Ayala and his wife Mylene Abiva, president and CEO of Felta Multi-Media Inc. and a speaker in one of the group sessions; and Tonette Tionko, representative of Ernst & Young Philippines.

That evening we attended the WEOY Hall of Fame introduction ceremony and reception at the Monte Carlo Casino Terrace, to support Ayala who would be inducted. It was an elegant cocktail reception with a jovial atmosphere where old friends and acquaintances reunited and formed new friendships over exquisite hors d’oeuvres, fine wine and champagne.

We also met the rest of the Philippine delegation: Vic Noel, chair and managing partner of SGV & Co.; and Mark Ruiz, president and cofounder of Microventures Inc., who came with his wife Reese. Mark was also a speaker in one of the group sessions.

Still filled with energy after the reception, my cousin and I decided to check out the Monte Carlo Casino of “James Bond” fame, which was adjacent to our hotel. Upon entering, I jokingly asked the receptionist if Daniel Craig is in there for us to meet. She laughed and said, “Unfortunately, not tonight.”

After going around and placing our bets in the ornately impressive gaming room, we moved on, resigned that Lady Luck was not on our side tonight.

We had a better time at the nearby Buddha Bar, sipping martinis over light chatter with the fabulous Monte Carlo partygoers. We called it a night at 2 a.m.

June 6, Thursday. The morning sessions featured candid and inspiring talks by Kofi Annan, former secretary general of the United Nations, and British philanthropist  Sir Stelios Haji-Ioannou, best known for establishing easyJet discount airlines in 1995 when he was only 28.

It was a beautiful, sunny day. By noon, my cousin and I thought of gallivanting and pampering ourselves in the Monte Carlo Beach Club for the rest of the afternoon. It was a well-deserved break from our itinerary on the way to the WEOY.

Our travel started in Milan. On the way to Nice, we visited nearby French Riviera hotspots, Cannes and St. Tropez. While lunching and relaxing with a bottle of Sancerre under the French Riviera soleil, we managed to get an even, medium tan by the end of the day.

Back to Monte Carlo. In the evening, the Philippine delegation was feted in a sumptuous dinner by Consul Patsy Zobel in her homey penthouse apartment that had an amazing rooftop view of Monte Carlo.

The evening started well, everybody feeling at ease over champagne and hors d’oeuvres. The fun conversation continued throughout dinner which was set up meticulously at the rooftop. The entrée was an amazing tender roast boeuf with perfectly grilled accoutrements of asparagus, zucchini and haricot verts, followed by macaroons and homemade cheesecake for dessert.

Except for the macaroons, Patsy’s staff prepared the delicious, top-notch meal.

Our hostess won us over with her down-to-earth attitude and genuine concern for other Filipinos working in Monaco.

June 7, Friday. It was another fabulous day and while we were much tempted to enjoy the sun again, we opted to attend all the sessions of the day.

In the morning were the very enlightening talks by Dr. James Mwangi, CEO and managing director of Equity Bank Limited and World Entrepreneur of the Year 2012; Dambisa Moyo, international economist and New York Times best-selling author; and Sir Timothy Berners-Lee, the inventor of the World Wide Web.

The afternoon group sessions allowed us to meet interesting speakers and fellow entrepreneur-participants: Mario Moretti Polegatto, founder and president of Geox and Diadora; and Mikael Hed, founder and CEO of Rovio Entertainment Ltd., better known as the creator of Angry Birds.

On this busy afternoon, the Philippine delegation attended a simple ceremony for Ayala at the Winter Garden of Hermitage Hotel, where Consul Zobel presented him the recognition and commendation letters from President Aquino and Trade Secretary Gregory Domingo.

At night we went to the posh dinner and entertainment reception at the Le Chapiteau de l’Espace. Women in cocktail dresses and the men in smart casual attire let it hang loose, dancing the night away to the music of the Beatles performed by a live band. Wine flowed and there was a sumptuous spread of the best cuisine from North America, Asia and Europe.

By lunch we boarded and viewed two specialty yachts docked at the Monte Carlo Harbor. These luxury yachts were elegantly furnished, with amenities such as a Jacuzzi out on the deck.

In the afternoon we joined the excursion to Eze, a French-fortified medieval village overlooking the Mediterranean Sea. With its twisting narrow lanes, archways, stone houses, fountains and amazing views of the coast,  Eze had a charm that gave you a glimpse of life in the medieval times.

After a brief rest, at last, we were on our way to the World Entrepreneur of the Year Award black-tie dinner and ceremony at the Salles des Etoiles in Monaco’s Sporting Club. This was definitely the place to be, in the company of distinguished world entrepreneurs and their significant others, all dressed to the hilt.

I proudly wore a tuxedo by designer Francis Libiran. The evening started with champagne cocktails on the terrace overlooking the Mediterranean Sea, followed by an elegant French dinner.

Then the lights were dimmed and, to everyone’s awe, the dome roof of the Salles des Etoiles opened up to reveal the star-lit sky. In a flash came a spectacular fireworks display that lighted up the coast. This was followed by an amazing performance of Cirque de Soleil.

Then the awards program began with the recognition of each Entrepreneur of the Year country winner. Our delegation proudly waved our little Philippine flags and applauded Ayala.

At the end of the evening, the winner was announced—from the United States, Hamdi Ulukaya, founder and CEO of Chobani Inc., the manufacturer of Chobani Greek Yogurt, which is now the best-selling yogurt in the States, with annual sales of $1 billion.

After the awards, we proceeded to Jimmy’z, Monaco’s premier nightclub and said to be one of Europe’s best. We were greeted by Hans Smit, Entrepreneur of the Year from the Netherlands. Cocktails and dancing went on until the wee hours.

The WEOY experience made me proud to be a Filipino and realize the great potential we have, both as an investment spot and source of skills. I also understood how globally competitive we already are. In an age when gaps are made smaller by information and technology, our people and our products are able to compete. The more we become entrepreneurs, the more jobs we generate—we have our own fun way of contributing to our country’s growth.

The author is founder and president of Adenip Inc., mother company of Folded and Hung, Jellybean, Wade, and Folded and Hung Salon. He was invited to attend the Ernst & Young World Entrepreneur of the Year in Monte Carlo, Monaco.