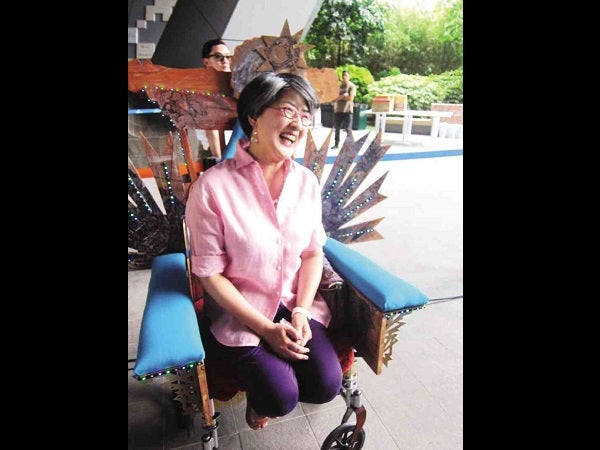 DEAR Irene Araneta:Would you like to get a chair like Don Salubayba’s for your mom if she intends to get old? ROBERT ALEJANDRO

I was poaching an egg for breakfast and remembered where it came from. A nice man on a wheelchair, who hails from Bacolod, handed me a tray of 30 Grade A eggs during Apolinario Mabini’s Birthday Parade—to keep the rain away.

And they did! The sky was blue and clear, not a drop of rain! (Sta. Clara liked the bribe.) I couldn’t share poached eggs with Dr. Cuanang, my partner in this mad and lovely endeavor, or Manny Chaves, still my best BFF, who conjured the show.

The big canopy of the Mind Museum, kingdom of curator Maribel Garcia, was the assembly ground. Decorated wheelchairs, 16 bongga creations from all over, were in a semicircle on a stage, the rondalla, also on wheels, in the middle.

My job had been to coax, wheedle, threaten and plead with the artists to finish their work on time and give me a picture of themselves beside their chairs as evidence. Then they would transport it to the basement of St. Luke’s Medical Center before the deadline.

The big part—the program, the parade and the exhibit—were Doc and Manny’s plotting.

Way before the affair, I had chosen to sit on Io Regalado’s Ibong Malaya wheelchair, which had a wingspan of at least six feet! It led the parade. The finale was the Siamese twin wheelchairs, “Sta. Elena and Constantino,” of Karen Flores and Noel Cuison.

It was in the static exhibit, in the lobby of the neighboring St. Luke’s after the parade, that the more subtle art of Agnes Arellano and Nona Garcia was appreciated. The spectators liked squeezing the silicon boobs on Agnes’ work.

When I was about 10, I had put up a Sta. Cruz-Flores de Mayo of sorts in our garage. The altar was stacked wooden milk boxes, the flower vases pop bottles.

I costumed the six-year-old twins of our driver with lampin, birds’ eye (diaper) capes pinned on their shoulders. And with my yaya and the other maids we marched down our short street with lighted candles, singing “Diyos te Salve, Ma-ri-aah…”

Later, we asked the Nakpil children, Dinda and, I think, Chine, to join us. Their parents gamely equipped them with ostrich feather fans and paste tiaras. Our Santacruzan was made! The driver’s twins’ costumes were upgraded.

We gained the respect of the neighborhood. Many adults emerged from their houses, lighted candles in hand, loudly joining our “Dios Te Salve.”  Even the policeman on R. Hidalgo was impressed and stopped the traffic for us to pass!

After that, we deposited the crucifix to the next Sta. Elena, the child of the photographer at the corner. That meant she would be the next May Queen, and the patrons, her parents.

May 30th, the last day of the Santacruzan, arrived. A big balag, a bamboo framework, was being tied to the Reyes’ upper-story window. On it hung candies, handkerchiefs and toys. It was to be lowered and raised while people grabbed at the dangling goodies.

Upstairs was a pandemonium of costumes, wigs and makeup colors. The Reyeses had rented real costumes! Participants were being dressed as biblical characters. I remember a Methusalah, an Abanderada (carrying a Filipino flag), Moses and even Salome, complete with the severed head of St. John. There was a blindfolded Justicia, the Tres Marias, and various apocryphal queens.

I couldn’t help gasping when the procession stepped out of the photographer’s house, a full-scale panorama! That was what our little garage Santacruzan had evolved into!

And that, it seems, is what the pattern of my life has ever been. You get a spark of inspiration that you think is a great idea. There are some who will catch your dream and help it along and make it real. It becomes a procession, a parade, an exhibit, a fashion show, a play.

From then on everything is magic—the creation of everyone!