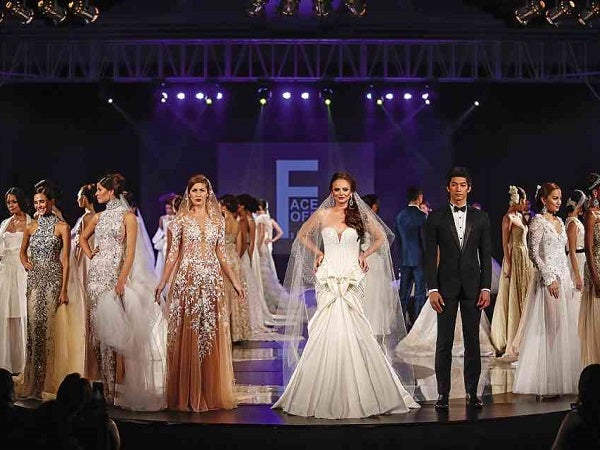 They joined the Cebu-based designers in a rare show that became more a celebration of style than a competition. (See related story on page H3.)

Directed by Jackie Aquino, the show featured 10 designers from Manila and 11 designers from Cebu. Each designer presented two to three creations. Models from Metro Manila and Cebu, including celebrity endorser Georgina Wilson, modeled the clothes.

Wilson represented SM Accessories which displayed their show-stopping items on the show and in the ballroom foyer. The bracelets, cuffs and earrings ranged from turquoise to pearls.

Randy Ortiz featured “a modern Pinay bride in a gown with a classic silhouette and a bit of a twist.”

He used layers of ivory colored tulle with different textures. To achieve subtle gradations in embroidery, he used a chain of rosette patterns.

“It’s a technique commonly used for veils,” he said. “This time, I used the fading effect from the bodice down to the full skirt.”

The twist came in the form of a peek-a-boo detail with strips of horsehair twisted and manipulated up to the back.

Ortiz also designed a man’s suit made of dark blue sharkskin fabric with brocade pattern. This time, the twist came in the form of a narrow shawl lapel made of black satin.

If Ortiz channeled the future, James Reyes echoed the past in his updated versions of gowns inspired by such elements and personalities as flowers, Georgia O’Keefe, Salvacion Lim Higgins and Ramon Valera.

His second number was retro in a chic way—two-toned duchess satin A-line dress with a split cape-slash-train and pearl-encrusted collar inspired by the Masai tribe of Africa.

“The inspiration behind this are ’60s gowns made by Filipino masters such as Slim’s and Valera,” he said. “I’ve been experimenting lately with culture clashes by mashing up African tribal and Filipiniana.”

Rajo Laurel drew inspiration from circles and movements to fashion two dramatic and huge, but surprisingly light, creations that billowed and nearly covered the runway.

“For my first look, I wanted to evoke a feeling of lightness through a dress with embroidery cording and electric-pleated details,” he said.

With a circular cape with a boned hem, the second gown evoked pure diva. But if you remove the humongous cape, the dress looked quite modern, minimalist and wearable.

His first number even came with side pockets, which the model emphasized. Not only was it unique; the touch elicited a bit of humor, as images of a bride paying for the party played in our imagination.

“The long gown was actually inspired by a nun’s habit,” Samson said. “It had a corseted bodice that seemed like an over vestment, and side seam pockets.”

The brocade dress came with a corset-cum-vest bodice with grosgrain straps and bow details on the shoulders and waist.

Ivarluski Aserson also stayed away from beadwork and embroidery, but he was still able to make two long dresses that evoked romance and femininity.

“The blush gown with a full bias skirt was made of gazar with laser-cut petals on the bodice,” he said. “The off-white gown was made of guipure lace and gazar. The lace bodice was layered with a jusi oversized top.”

Albert Andrada also drew from his training and exposure in the Middle East to come up with two elaborately beaded, “more-is-more” gowns inspired by ancient Chinese blue and white vases.

“The all-white gown is made of skin-toned tulle. Its front and back are fully embroidered in white silk thread,” he said.

As if the gown’s bead- and crystal-embellished neck wasn’t enough, Andrada traced the embroidery with white glass beads and accented it with white opals and unevenly cut Swarovski crystals.

For his second gown, a halter number made of beige tulle, Andrada fully embellished the neck and bodice with pieces of blue and white china and Swarovski crystals.

“I wanted the cascading beads and crystals in the skirt to spell opulence,” he said. “For good measure, I added Swarovski crystals in silver, gold, white opal and light Colorado topaz.”

Rhett Eala and Vic Barba chose to show their range as designers by showing two gowns each that looked like exact opposites of each other.

Barba said he wanted to provide brides easier alternatives to what’s commonly available in the market. The pink tent dress made of tulle, with cascading back and Chelsea collar was one such example.

Barba also showed an “antique” beige strapless dress made of ruban lace. Although the silhouette is classic Dior, the designer updated the look to appeal to modern brides.

“The silhouette is traditional, but it works well with the beauty of the fabric’s unusual lacework,” he said.

Eala had a strapless light gray gown made of gazar and silk organza, embellished on the bodice and skirt by hand-stitched fabric that flapped like paper cutouts.

“This time, I wanted to do embellishment by using fabric instead of beads and crystals,” he said.

The second number, a white, cap-sleeved gown, also in gazar, was done in a more traditional silhouette with a twist on the neckline inspired by a cheongsam. Eala then embellished the lace gown with a hint of beadwork and lace appliqués.

De la Rosa found lace in blush “perfect for the blushing bride.” For his first gown, he used such materials as corded lace for the top and hemline, before sprinkling the gown with cut beads and Swarovski crystals.

“When I was making the gowns, I was inspired by this generation of young brides who are willing to try new things,” he said.

De la Rosa used 35 yards of lace to create an “ethereal” look for his second gown, a cut-on-the-torso number with a Sabrina neckline.

Ocampo did two close-to-the-body gowns made of tulle that harked back to the ’50s. He gave them a modern twist by opting for such colors as beige and maize.

The beige dress was an off-shoulder number with a beaded bodice, while the maize dress had a lace and embroidered bodice. To give his skirts volume, Ocampo used layers of tulle.

“I’ve always been a romantic at heart, and it reflects in my designs,” said Ocampo. “These two gowns are definitely for the romantic bride.”