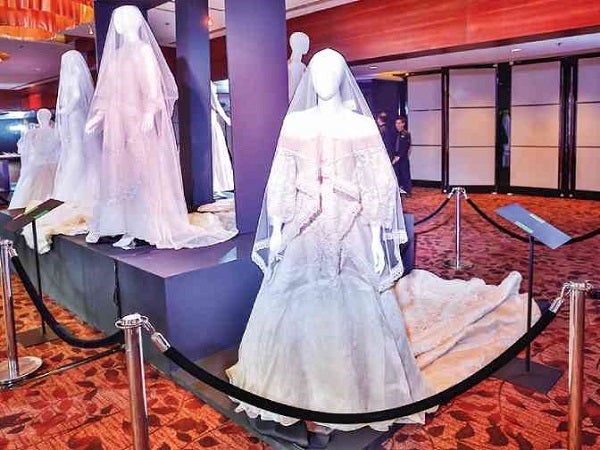 From Moreno to Laurel, a parade of timeless wedding gowns

To give guests an idea of what beautiful, timeless gowns are, Inquirer Lifestyle and LOOK Magazine, with Champion Infinity and SM Cebu Northwing, staged an exhibit at the foyer of the Radisson Blu’s grand ballroom, featuring select wedding gowns by leading Filipino designers, and once worn by real brides.

Apart from being an extension of the designers’ aesthetic sensibilities, the gowns were pretty much a window to their wearers’ personalities and state of mind during their weddings: modern with a touch of the romantic for Lucy Torres Gomez (Ortiz); classic and dainty for Elvira Gotauco Luym (Moreno); confident and no-frills for Amina Aranaz Alunan (Lloren); romantic for Christina Garcia Frasco (Gayatin); and daring and of-the-moment for Jasmine Maierhofer, whom Laurel tapped to model the gown.

It was as if Salazar had never left, as his painstakingly embroidered, off-the-shoulder Maria Clara-inspired piña gown with a long train and panuelo for Peggy Ty Cham could still make heads turn if worn today.

It was also a venue to see up close the designers’ craftsmanship and artisanal abilities. Escario, for instance, showcased a serpentine gown made partly of crocheted material.

Far from looking like a school project, the piece worn by Samantha Roxas Hoften looked chic and definitely one of a kind.

Santiago, another designer known for his artisanal prowess, exhibited a gown worn by Rosanna Ocampo Rodriguez, which incorporated his trademark doily cutouts on the hem, and woven, overlapping pleated details on the skirt and bodice.

And, of course, Salazar’s work showed how versatile the designer was. From soft chiffon fabrics, the designer could shift with ease using piña and embroidered lace.

The same timeless quality applies to most of the pieces, which attracted a number of female guests, including Filipino beauty queen and Miss Universe first runner-up Janine Tugonon.

“If I were to get married today, I’d like to wear what Rajo did,” said Tugonon, referring to the glittery, almost backless A-line number Laurel did. “I love the idea of being seen walking down the aisle in something sparkling.”

Tugonon also expressed her preference for a “veiled gown,” whose designer’s name escaped her. She was probably referring to Ortiz’s glittery, spaghetti-strapped gown for Gomez.

Cebu-based Luym, who got married in Manila in a wedding gown by Moreno, also cited Salazar and Gayatin among her favorites in the exhibit.

“Joe’s attention to details is simply lovely,” she said. “I like Arcy’s gown for its classic, ladylike qualities.”

We also caught Cebu socialite and businesswoman Amparito Lhuillier admiring the work of Rodriguez, one of her favorite designers.

“Philip was the first one who took care of me after all my children were born,” said Lhuillier, who was wearing a royal blue gown with a pink sash by US-based daughter Monique Lhuillier. “Over the years, I’ve tried other Cebu-based couturiers like Jun Escario, Cary Santiago and Arcy Gayatin.”

Like any proud mother, Lhuillier’s favorite designer these days, of course, is daughter Monique. Except for Inno Sotto, she has yet to try other Manila-based designers.

“It’s just a matter of going back and forth from Cebu to Manila for the fittings that has stopped me,” she said.

But Lhuillier, who was born and raised in Manila, tapped the late Manila-based designer Pedrito Legaspi to do her wedding gown. She was married almost 50 years ago in San Agustin Church in Intramuros. Reception followed at the Casino Filipino near Taft Avenue in Ermita.

“I don’t know if I’d still fit into the wedding gown next year when my husband and I renew our wedding vows,” she said. “But I’m bringing out the gown’s beautiful train, which has since turned from white to beige with time, and asking my daughter to incorporate it in the design she’s doing for me.” Alex Y. Vergara