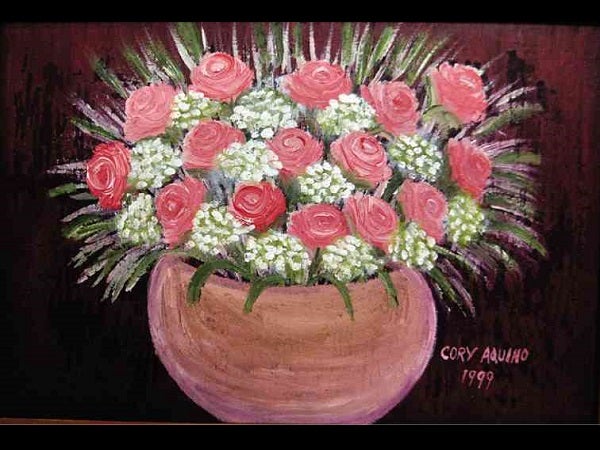 Priceless. That was how some recipients described the paintings given them by the late President Corazon C. Aquino.

Days before the opening of “A Gift of Self,” an exhibit of her paintings at the Manila Hotel to commemorate her fourth death anniversary, some recipients brought their prized paintings and talked about their relationship with Aquino and the circumstances surrounding the artworks.

Over 80 paintings owned by 40 exhibitors will be on view at the Lobby Lounge of the Manila Hotel beginning Monday until Aug. 2.

What was most notable during our interviews with the recipients was their continued respect for and admiration of “the woman in yellow,” as the late President has come to be depicted.

These were people who were either part of Aquino’s Cabinet or who worked in other capacities during her administration. Even long after her term ended, she kept in touch with them, eventually becoming a friend to many of them.

For three years, Aquino with a handful of artistically inclined friends, attended a weekly class conducted by artist Jeffrey C. Consumo. She never missed those Wednesday classes which were held in the Sumulong-Cojuangco clan house in Forbes Park.

“We started by doing landscapes because I wanted the class to see things as a whole. As the days went by, they began doing flower paintings mainly because they were drawn to them,” he said.

In the art class was Cristina M. Sariño, now a member of the board of directors of the Philippine International Convention Center and whose husband Cesar was Interior Secretary in Aquino’s administration.

“None of the pieces exhibited then were for sale because as Tita Cory said, ‘Our paintings are priceless.’ When you think about it, the ones she painted really were. Nobody would dream of selling a painting given by Tita Cory,” Sariño said.

Aquino would give her paintings as token of gratitude or friendship. Each piece occupies a special place in the home of its owner. Some owners were hesitant to exhibit their Cory Aquinos because they were unsure whether or not the hotel could provide ample security.

The bulk of the exhibit, or around 30 pieces, come from the Metrobank Foundation headed by its president Chito Sobrepeña. For 16 years until her death in 2009,  Aquino was chair  of the Foundation’s newly created board of advisers.

“She never missed any of the three yearly meetings. We wouldn’t start until she arrived,” Sobrepeña said.

Over the years, she became friends with Metrobank chair  Dr. George S. K. Ty and his family, proven by the numerous paintings she gave him and his family.

“The volume of the Cory Aquino collection by the Ty family reflects the kind of relationship the former President had with the family, not just with Dr. George and Mary but also with their sons and daughters,” Sobrepeña told Lifestyle.

A painting from the Ty collection is of two women surrounded by pink roses. Titled “Sisters and Friends Forever,” it depicts the relationship Aquino had with Mary Ty.

The painting is striking for two reasons. First, Aquino rarely included human figures or faces in her paintings, and second, she gave a title to this, unlike her other pieces that she simply numbered or listed as part of a series.

After what would turn out to be her last foreign trip with the Metrobank Foundation to Nanjing, China, Aquino gifted Alessandra V. Ty, the daughter of George and Mary, a floral painting with a yellow background.

“Instead of giving expensive and extravagant gifts, Cory shared her talent and love of art with the Ty family,” Sobrepeña said.

She gifted many others with her paintings and touched many lives with her graciousness.

Jose T. Pardo, chair of The Philippine Stock Exchange, Inc. and one of Edsa People Power Commissioners, said, “My wife and I have three paintings between us but the two that  Aquino herself gave me are especially meaningful. One of them is part of a series of rosaries and roses that I cherish because it reminds me of the rosary she lent me when I underwent a triple bypass operation.”

Years in public office—he was in President Estrada’s Cabinet—had taken a toll on his health. During a routine medical check-up in 2002, his doctor told him he was “a walking time bomb.”

The surgery was set and before Pardo went under the knife,  Aquino lent him the rosary given her by Lucia, one of the children whom the Virgin Mary appeared to in Fatima.

“The rosary was wrapped around my hand during the surgery and I think it helped because three days after my operation I was already walking. I still had to undergo physical therapy but I was able to regain control of my body fairly quickly,” he said.

The second painting he received and which will also be on exhibit is a forest scene. “She handed me the painting on my birthday when I was still the Finance Secretary. That’s how gracious she was and this is why I still hold Cory in the highest respect,” Pardo said.

Sen. Cynthia Villar and her husband Manuel are also proud owners of a painting by Aquino. Villar recalled how she once cajoled Aquino to give her a printed reproduction of her painting.

“She said that my husband Manny already had a wide collection of well-known artists, and that he didn’t need one from her. I told her that we would only be so happy to own one of her pieces so she gave one to us that is now displayed in our library.”

“Cory gave them to me one Christmas and I felt they were too precious to be used for their original purpose so I had them specially framed,” Montelibano said.

To the trained eye, Aquino’s pieces might be considered naïf and amateurish but to people she gave them to, they are priceless.

“There are two reasons one hangs a painting on a wall,” Montelibano said. “First is because the piece is by a renowned artist. Second is because the person who made the piece and gave it to you is someone you look up to. Cory falls in the second group.”