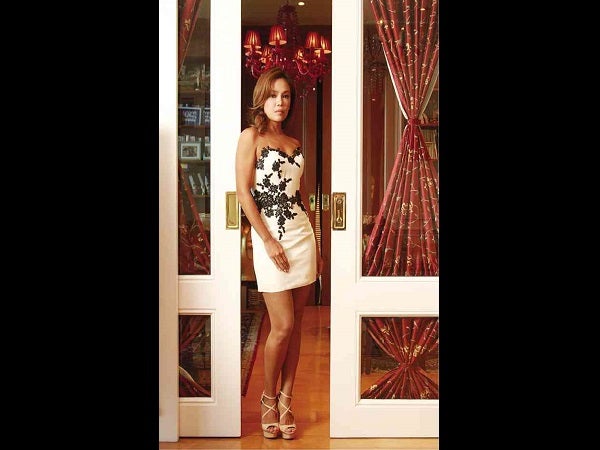 Heartbreak is the theme of the stage play “Closer,” written by English playwright Patrick Marber. Some aspects of it seem close to home to actor-director Ana Abad Santos.

“It’s about four dysfunctional people looking for love which invariably eludes them. It can be love today, but tomorrow it’s something else,” she explains.

“Failed relationships are one of the most devastating things in our lives. We keep asking what went wrong? What could we have done? We die a little when that happens.”

Abad Santos admits to having a marriage that didn’t work out. But she and her ex-husband are friends and share joint custody of their 13-year-old child.

She chose to mount “Closer” for its raw emotions.

“I’m obsessed with the deterioration of the human soul in the guise of relationships. This is tackled in ‘Closer,’” Abad Santos says.

The play is the debut production of the new company Red Turnip, which she formed with Cris Villonco, Jenny Jamora, Topper Fabregas and Rem Zamora.

To be launched on Oct. 4 at Whitespace (2314 Chino Roces Ave. Ext., Makati), “Closer” features Bart Guingona, who was Abad Santos’ first acting teacher when she was 12 years old. Now the tables have been turned, she says. The cast also includes Villonco, Marc Abaya and Angel Aquino.

The 2004 film version adapts the original stage script almost verbatim. “Except that the movie’s ending was changed, which was a cop-out for me,” says Abad Santos. Audiences, who saw the Hollywood movie, could make comparisons with the play.

In February, Red Turnip will have Zamora directing Mike Bartlett’s “Cock,” the story of a man torn between his male partner and a woman. It’s not so much on bisexuality as it is about the lack of resolution due to issues of self-identity. The play is set in a circular chamber.

Red Turnip aims to provide an alternative repertoire that plays against the prevailing trend of theater musicals.

“These are materials which we are not used to. Maybe they’re not marketable,” says Abad Santos. “The materials are more in-your-face, just as in life, and they have a little more edge.”

With 25 years of theater experience, the 37-year-old thespian can well take risks. Aside from her extensive training under the late director Zenaida Amador, Abad Santos honed her craft in classical theater at the London Academy of Music and Dramatic Arts.

“Acting became a demon I controlled instead of a demon controlling me,” she says.

She was attracted to classical acting because of the rich literature and exacting discipline. “We need to have an understanding of the past to see the future. My training is definitely a big part of my life as an actress, both internally and externally,” she points out.

In acting lessons today, Abad Santos teaches the impact of stillness in a performance and the importance of breathing in extending the capacity of the voice.

To her, there’s no such thing as a breakthrough performance. “I am always breaking through something inside me in every role I play. I actually wonder sometimes if, one day, there will be nothing left to break,” she muses.

She cites playing the title role in “Mary Stuart,” staged in 2009, as one of her finest moments onstage. Aside from pulling all the stops in her classical training, she shared the spotlight with theater royalty Shamaine Centenera-Buencamino who portrayed Queen Elizabeth.

Although Abad Santos won an Aliw Award for Best Actress, she felt her biggest reward was to be acknowledged by her own peers.

On the same year, she was also nominated twice for Best Actress at the Philstage Gawad Buhay Awards—for playing Blanche DuBois in Tanghalang Pilipino’s “A Streetcar Named Desire,” and for Candida in Repertory Philippines’ “Portrait of the Artist as Filipino.”

There were funny moments, too. Abad Santos recalls her costume getting caught on the set of “The Importance of Being Earnest.” She left the stage dragging the furniture.

She was also red-faced when she had to wipe a naked Jamie Wilson who stepped out of the shower in “Les Parents Terribles.”

“We never rehearsed it. I tried not to look the first time, but the audience kept laughing. The next time, we decided how far down I could go to dry him with a towel,” she recalls.

Among her recent works are playing Jessie Mendiola’s mother in the teleserye “Budoy,” and appearing in award-winning indie films.

One of her offbeat roles was portraying a domestic helper in Flora Lau’s “Dry Rain,” which won in the Hong Kong International Film Festival. For the actor’s immersion, she befriended Filipino domestic helpers who gathered around the HSBC area in Hong Kong.

Although it was taboo in Hong Kong to stay where the helpers lived, Abad Santos observed closely in the home of the director’s friend. She learned to do household chores and experienced the hardships of living in a compact space.

“I’m used to playing other kinds of roles. This one was humbling and painful. The maids practically live in a closet. Here we treat helpers like family. My director was connected to that. She looked up to her Filipino helper like a mother. This film was an homage,” explains Abad Santos.

In Sean Ellis’ “Metro Manila,” a film that will premiere in the Philippines in October, Abad Santos appears as John Arcilla’s wife. The film won an Audience Award at the Sundance Film Festival.

With all the acting experience, directing was a natural outcome. Abad Santos’ first outing as director was “Hamlet” in an apocalyptical scenario for Repertory Philippines in 2007. She fell in love with Shakespeare when she played Ophelia in “Hamlet.”

“I was 17 and we were rehearsing in a garage,” she says. “Hamlet rocks with all the blood, gore, ghosts, incest and insanity. What more can you ask for?”

Abad Santos’ succeeding directorial projects for Repertory Philippines included “Duets” and “39 Steps” which were nominated for Best Play and Best Director at Philstage. She also ventured into rock opera via “Bare,” produced by Ateneo Blue Repertory.

“Tita Bibot’s (Zenaida Amador) passion still lives in me,” says Abad Santos. “I hope to carry the torch and keep the fire burning.”

Despite the acting and directing jobs, Abad Santos and her colleagues were aching for meatier scripts. “I got a feel of what I wanted to do when I did a political play, ‘An Evening at the Opera,’ for Floy Quintos. I played a politician’s wife. It was one hour of hell with just the two of us onstage. I loved the fact that, even if it was written in English, the topics were so close to us—corruption and women stuck in their hell because there is no divorce. We need to do more of those plays where theater mirrors society. We should be able to see ourselves in it,” she says. “The play pushed me to look more into original work and to understand the role of theater in a changing society.”

Hence, the birth of Red Turnip.

Asked how the company plans to survive in a tough business environment, Abad Santos replies in half-jest, “With love.”

Her elder sister Maricris Albert, CEO and president of Fila Philippines, the sportswear brand, has been supportive. “I never thought of the word ‘help.’ We grew up very close to each other,” says Albert.

At Fila, Abad Santos keeps a day job as vice president for advertising. “More than doing events, I take pride in being the yin to my sister’s yang, or vice versa,” she says. “It was difficult at first because we are so different, but we really found each other’s strength. The retail business is tough and very far from theater. I always tap people from the theater as part of my creative team. It feels like home.”

Abad Santos recalls a boutique opening as one of her lessons. “Ate and I actually fought before the event! But it turned out to be successful. I think that was also our first and last corporate fight. I realized that I can’t be too much of an artist. I’m serving a client,” she says. “Working with her, I learned about whom you want to target.”

Every year, Abad Santos organizes the Fila Cup, which is arguably the most dramatic and well-attended event in the polo season, replete with a theme, sets, music and dance.

Although Albert knew that Abad Santos would eventually form a theater company, she advised her younger sister to treat it like a business.

“What pushed her was love for the art. It wasn’t a sales and profit thing. She just has to trust her heart and experience,” says Albert, whom Abad Santos fondly calls “The Rock.”

Albert’s advise is to define Red Turnip’s audience if it is untapped or underserved. She also underscores the importance of creating awareness for the company and communicating its accessibility to its market.

Abad Santos says, “My sister has helped me not to be so idealistic. Before, it was all heart. We do have a business plan and a five-year plan.”

For now, she is pushing for ideals: “We watch a play because of the beautiful words of the playwright. As an audience, you don’t just sit down and passively watch the set changes. The best plays force you to ask questions. Historically, theater started as a political platform and people put in their opinions. I want to continue that tradition.”