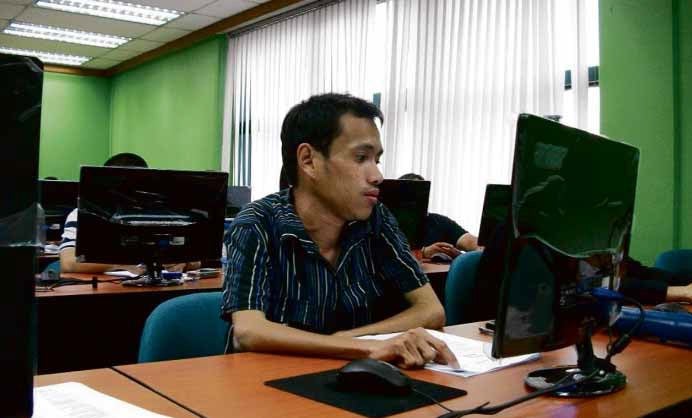 For a few minutes, Emerson Paguia stole the spotlight during President Aquino’s State of the Nation Address on July 22 when his success story as a balut (fertilized duck egg) vendor-turned-web developer was cited by Aquino.

For a few minutes, Emerson Paguia stole the spotlight during President Aquino’s State of the Nation Address on July 22 when his success story as a balut (fertilized duck egg) vendor-turned-web developer was cited by Aquino.

Paguia’s dream of one day becoming the highest official of the land may seem farfetched, but the 29-year-old web development course graduate under the Technical Education and Skills Development Authority (Tesda) Training for Work Scholarship Program has a track record of achieving the seemingly impossible.

Money had always been difficult to come by for Paguia, whose mother died in 1999 and whose father abandoned him and a sibling much earlier. But that did not prevent him from pursuing his goals, as he took inspiration from the life of Benjamin Franklin.

“I read in his biography that time should be used productively. I learned he was just like me, whose family had to struggle with poverty. I said to myself, he was right,” Paguia told the Inquirer in Filipino.

Paguia was able to complete a two-year vocational course at AMA University in Antipolo City through the generosity of his father’s sister. His dream was to become a computer programmer and web designer after completing enough units.

But his dream did not come to fruition.

He applied at call centers and multinational companies but Paguia, who earned extra money by selling pan de sal in the morning and doughnuts in the afternoon, was rejected due to his inability to communicate well in English.

He ended up working for two years in an Internet café in his hometown of Subic, Zambales, making minimum wage.

It was during those two years that he learned how to construct a web page.

“That was the time when Friendster was still quite popular and the challenge was to have the best Friendster layout. That was where I enhanced my skills in web design. I enrolled in tutorials online and I learned as much as I could from free online resources,” said Paguia.

His meager savings dwindled fast and he turned to selling balut. He would sell about 50 balut every day and earn between P100 and P200. He also sold chicharon (pork crackling), peanuts and penoy (hard-boiled duck’s egg). On a good night he would take home P250, which he used for job-hunting expenses.

Paguia’s luck finally turned when he learned about the Tesda scholarship program from a friend on Facebook.

Paguia, who emerged as one of the best in his class, was provided additional training under the supervision of senior developers and management of Informatics College, who saw great potential in him.

He became part of the team that developed the iPad-based scoring system used in the latest Mutya ng Pilipinas beauty contest.

He no longer sells balut every day. The last time he hit the road with his basket was the first week of June.