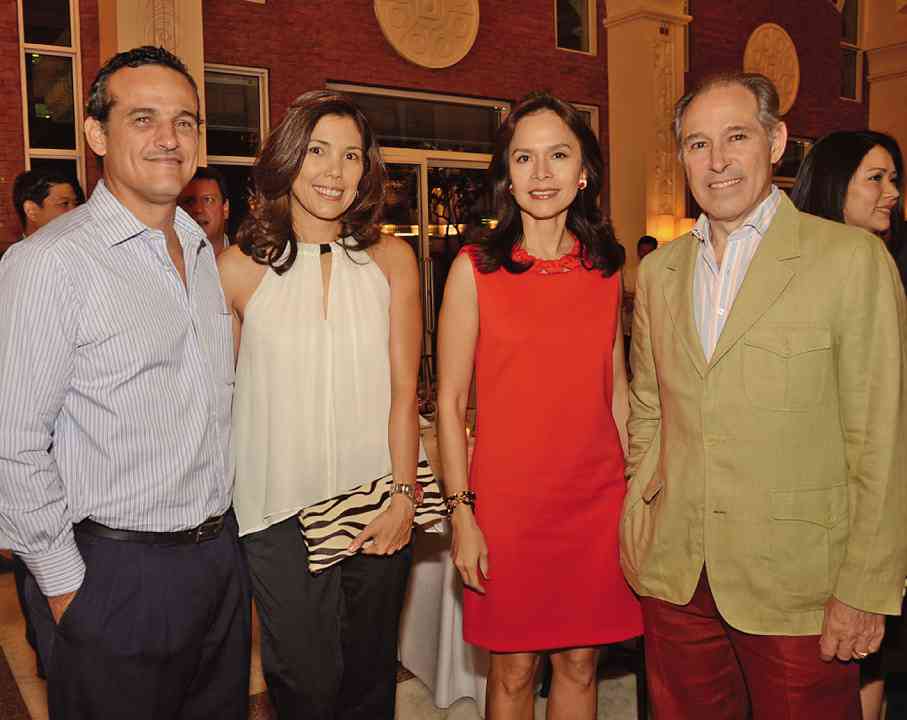 (Falco was the second husband of Isabel Preysler, with whom she has a daughter, Tamara Falco.)

The restaurant’s stylish interiors were the perfect setting for simulating a colorful, high-end bistro in Paris, with flowers by Margarita Araneta Fores, naturellement.

The grand gourmet dinner was prepared by the school’s “Chef de Cuisine,” Julian Koberi; he provided a commentary for each course, pairing each meal with smooth vintage wines.

The main course was Braised Oxtail with Air-dried Beef with Red Wine Sauce.

The wines were brought to the Philippines all the way from the grand Griñon Estate in Toledo, Spain.

Rosanna proudly introduced the Marqués to our town’s alta sociedad. He was effusive in his reply, saying he was “eternally grateful” to Rosanna for ensuring that he maintained close ties with “my family in the Philippines.”

He said the Falco family has maintained the family vineyard and estate “from generation to generation” and, through tradition and sustainability, has “created the best single-estate wine in the world.”

“My family,” he added, “has dedicated their time and resources to obtain high-quality ‘extra-virgin olive oil,’ now considered the best in the world.”

The Marques said the wine estate’s bestsellers are Cabernet Sauvignon and Petit Verdot.

During the dinner, moi overheard three members of the Marqués’ Spanish entourage saying that, among the many women that night, the most “guapa y exotica” was none other than Bledes Fores-Legarda. And they were absolutely right, palanggas.

The Ayala Malls hosted the concert of the Little Singers of Monaco recently.

This group of talented young choirboys instantly won the hearts of music fans in Manila at its show in The Gallery in Greenbelt 5, Ayala Center, dahlings.

The Little Singers of Monaco was founded in 1974 under the directorship of Philippe Debat. He was asked by the Principality of Monaco to form the group and carry out a musical mission in every country.

Prince Rainier III later referred to them as “my little singing ambassadors.”

The choir performed an extensive repertoire of classical music from Bach, Mozart  and Verdi.

Its Philippine debut was incredibly successful as the crowd applauded thunderously and gave a standing ovation to the boys.

Hosting the event was RJ Ledesma, vice consul of Monaco, who was with his smart wife, lawyer Vanessa Ledesma.

His mother, the Honorary Consul General of Monaco to the Philippines, stylish Fortune Ledesma, welcomed the A-listers to the concert.

“Ayala Malls and Greenbelt continuously aim to bring excitement to all its shoppers as they feature internationally acclaimed talents to offer a world-class entertainment retreat,” said Greenbelt GM AC Legarda.