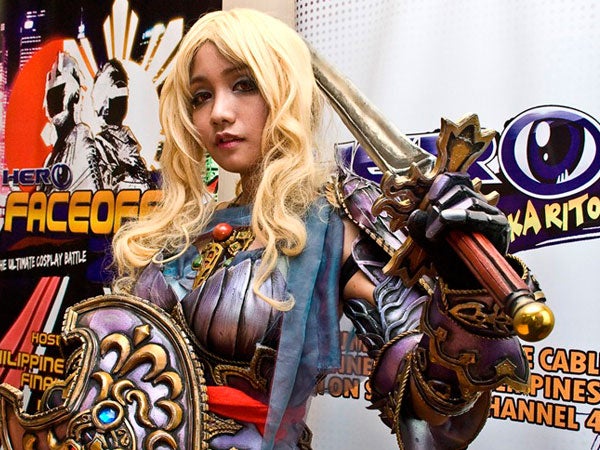 MANILA, Philippines—The biggest gathering of outstanding cosplayers from all around the world is set to take place this August at the World Cosplay Summit in Nagoya, Japan—and the Philippines’ number one anime channel, Hero TV, will be sending two of the country’s top cosplayers who took home the grand titles at the recently concluded “Hero Face Off 2013.”

Hero TV will be sending Hero Face Off 2013 Grand Champions John Vincent Estapon and Erika Jean Garbin to the World Cosplay Summit as part of their reward for a stunning appearance made in this year’s “Hero Face Off,” where they dominated as Haseo from .hack G.U. Trilogy and Freya from Zangeri No Reginlein respectively.

The World Cosplay Summit will showcase an array of talents from 20 participating countries from five different continents, and will be held from August 3 to August 4. It is held annually in Nagoya, Japan by TV Aichi, the event’s founding company.

There will be three observer countries in this year’s summit; the Philippines, Hong Kong and Taiwan. With the Philippines now as an observer nation, this year will serve as the country’s pedestal into claiming full membership in the World Cosplay Summit to compete in the coming years.

Besides the World Cosplay Summit, Hero TV will also be bringing even more to the table that is well worth all the excitement and anticipation, with new titles coming to the channel such as “Aquarion Evol,” “Gundam Age,” and “Gundam UC Vol. 3 and 4”.

“Aquarion Evol” tells the story of an alternate reality wherein the earth’s females are being invaded by different beings from Planet Altair, where the female population had already been wiped out. With the invaders’ intentions of ensuring the preservation of their race, they aim to capture humans in order to repopulate—and so mankind chooses to respond by establishing a group that pilots giant machines called “Aquaria”. Catch it as it airs beginning August 5 at 10 p.m. with replays at 12 a.m., 4 a.m., 10 a.m., and 4 p.m.

In “Gundam Age,” a mysterious entity known as the “unknown enemy” attacked and destroyed a space colony years ago. With this at hand, a young man is determined to restore peace in

“Gundam UC Vol. 3 and 4” tells the story of the hundred-year curse of the universal century. It goes into the truth of the mysterious “laplace box,” surrounded by hard-core full frontal metal action. Don’t miss it as it premieres on August 4 at 12 a.m. with replays at 12 p.m. and 9 p.m.

Watch the best of animation and more on Hero TV (SkyCable Channel 44), the number one anime channel in the Philippines. For the latest happenings and airing schedules, visit Hero TV’s official website at www.myheronation.com.