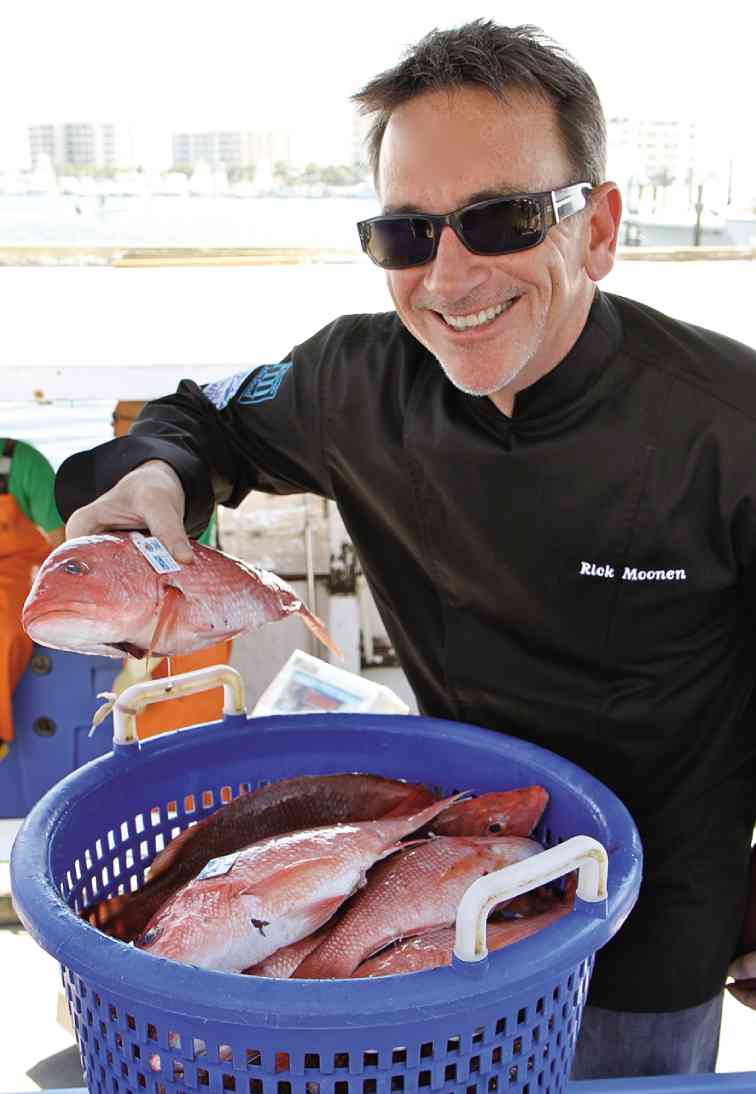 Chef Rick Moonen’s credentials are stellar, the highlights of his career many. He graduated top of the class at the Culinary Institute of America, New York. He was given three stars by The New York Times for his restaurants Oceana, Molyvos (a Greek fish house) and New York City’s rm.

He moved to Vegas and built his multilevel restaurant, Rick Moonen’s rm seafood, at Mandalay Bay, where his offerings are “state-of-the-art sustainable seafood” with a world-class sushi and raw bar.

Chef Moonen is also co-author of the cookbook “Fish Without a Doubt.” His signature recipe, Catfish Sloppy Joe, was highlighted in Esquire’s “Sandwich Encyclopedia,” earning him a guest spot on “The Oprah Winfrey Show” where he served it to the talk-show queen. It ended up earning the title Best Sandwich in America.

He spends the rest of his time traveling to give talks on the importance of ocean conservation and the dangers of over-fishing.

Moonen was named “Seafood Champion” by the Seafood Choices Alliance, honored at the International Chefs Conference with The Community Award presented by StarChefs.com, and hailed Chef of the Year by the Monterey Bay Aquarium for his tireless efforts to promote sustainability.

I had an interview with Moonen, thanks to my dear friend and colleague, chef James Antolin, who arranged it.

“It started with (the international organization) SeaWeb and getting involved in the ‘Give Swordfish a Break’ campaign several years ago. Nora Pouillon (of Restaurant Nora and Asia Nora in Washington, DC) called me, asking to take swordfish off my menu because it had been over-fished.

“I knew that swordfish had become harder to get, that it was smaller and sometimes of lesser quality. So I got involved. I became the spokesperson, and it ended up being a historic campaign that actually forced the government to take action.”

On cooking with a conscience:

“We have such a narrow area of acceptance of the fish that we eat as mass consumers. We basically hone down on cod, tuna, sea bass, salmon and one more fish, depending on where you live. It could be halibut or red snapper or grouper, if you live down in the Gulf area; and if you’re out on the West Coast it could be rock fish.

“There are certain species that are over-fished, yet there are hundreds of thousands of species of fish in the ocean that are untouched.

“If you are a fisherman trying to catch cod and you bring a lot of fish up that are untargeted, you throw them back overboard because there is no market for it. It is a gross waste of biomass, and it’s edible.”

What does sustainability mean to a chef?

“It’s about diversity. Stop eating just tuna, salmon and shrimp. You like salmon? Try farmed Arctic char. [But if] you really want to eat salmon, eat it from a responsibly managed fishery.”

“Use the Monterey Bay Aquarium’s Seafood Watch website. Ask your purveyor questions like, ‘Is this line-caught or farm-raised?’ Ask where it’s from. Eat smaller fish, they’re lower on the food chain, and better for the environment and your health.”

Is there a right way of choosing ingredients to support the advocacy?

“Instead of salmon, I would recommend Arctic char. It’s farmed in recirculating systems, so it doesn’t have the environmental impact. And it’s a relative of salmon, more closely related to trout. It’s delicious; I call it salmon light. If you are a red snapper addict—and red snapper is on the red list—go for barramundi, perhaps. Instead of Chilean sea bass, sablefish (black cod) is a great fatty, flaky fish. Alaska has a good conservation system in place, so that it can become the methadone program for Chilean sea bass addicts.”

He ended with something for us to ponder: “If nothing’s done to change the way we’re purchasing, consuming, and removing biomass from the ocean, all commercially available fish will be extinct in the next 35-40 years.”

Moonen gifted us with a recipe:

Whole ‘branzino’ with ‘charmoula’ on the grill

Make several shallow cuts through the skin on both sides of the fish.

Slather liberally with the charmoula, stuffing the rest in the cavity.

Marinate in the refrigerator for five to eight hours.

Prepare grill and set the grate 4 inches above the fire. Make sure it is very hot.

Brush a fish basket with oil and pack the fish into it.

Grill fish for five minutes on each side.

Insert a thin knife or a metal skewer into the thickest part of the fish and leave it for 30 seconds or so.

Let the fish rest for 10 minutes before you fillet and serve it.

Charmoula is a Moroccan spice paste, terrific for flavoring a whole grilled fish.

5 garlic cloves, cut in half

In a food processor drop the garlic on the feed tube.

Scrape down the sides, add the lemon juice, paprika and cumin.

Pulse a few times to combine.

Pulse to make a coarse puree.

Turn the processor on and pour the oil in a steady stream.

Recipe is from “Fish Without A Doubt” by Rick Moonen and Roy Finamore.