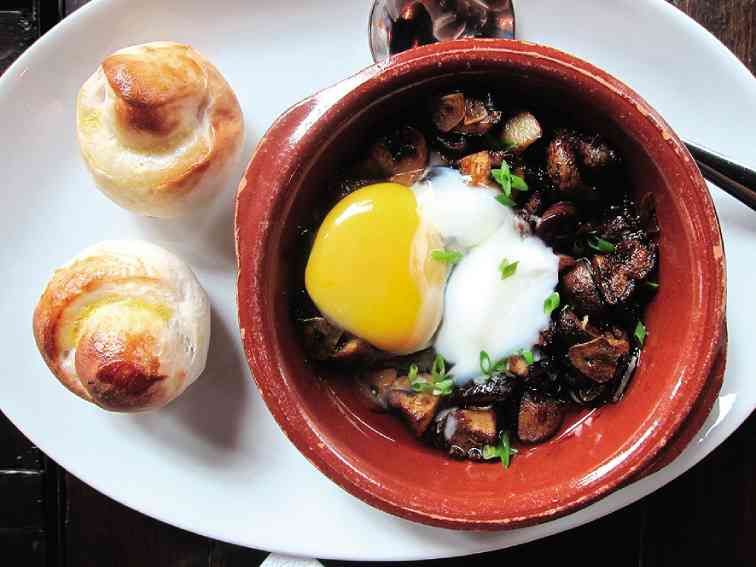 There are restaurants that serve international cuisine— French, Filipino, American, Japanese. And there are dining places that combine influences from various parts of the world and somehow come into their own.

Sunshine Kitchen is one such restaurant.

Initially, it seems to be all-American. The interiors feel like Chicago, very dusky. But the large windows bring in the light—or sunshine, if you wish.

The first thing you read on the menu board is steak. And the waiter says they are best known for their “artisanal” pizzas. (Fancy names like this are created only by Americans. In Italy it’s just pizza!)

But Sunshine Kitchen is not just American. There’s paella which is clearly a Spanish dish, pasta which is obviously Italian, and brisket which is owned by almost all nationalities the world over.

So, the conclusion is that this must be one of those places, similar to Angel’s Kitchen or Mamou, where the chef cooked fascinating meals for friends who egged her on to open a restaurant. Then… ta-da! An official kitchen.

This kitchen deserves its space—the dishes are indeed memorable. Start with Mixed Mushroom with Poached Egg, which will have you at hello. Whether it’s for brunch or for after-dinner drinks and appreciated with a glass of whiskey, it will make you smile (like sunshine!).

It’s quite the unique creation, too, a lovely blend of umami, heightened by the inclusion of roasted garlic and given texture by the poached egg. A hearty appetizer.

Then you can have your pick of comfort food. There is the Spanish-Filipino Cabanatuan Longganisa Paella, packed with flavor. Or Beer Braised Brisket of Beef and Short Ribs, which was just a tad short of tender perfection although it was also packed with flavor. Like the perfect crime, it showed no evidence of beer.

And then there is the labor of love that is the Roast Porchetta, cooked for six hours. Alas, sometimes love hurts, no matter how much you labor, and in this case the skin was not consistently as crunchy as it must be. But the meat was definitely soft and juicy.

They also offer cast-iron steaks. This is not for the steak snob. The marbling wasn’t intense; there were no Wagyu shmagyu or Grade 9 proclamations. But what you will get is a steak that is crusty outside, beautifully seasoned, with juicy meat. It tastes like home.

The pizzas were another story. No home pizza here. It’s, ahem, “artisanal.” The Cabanatuan longganisa made another appearance, as did the Roast Pork. In Sunshine Pizza they danced

together in one circle and the fun was sealed with eggs. They were delicious.

Everything really felt like home cooking. It was like the chef went to market, picked out a few striking ingredients, and went home to create a dozen or so recipes, as evidenced by the repeated use of garlic, longganisa, quail eggs and pork.

Just like home, though, it’s the kind of place you go back to again and again—for your favorite aunt’s paella, for your sister’s Salted Caramel Cheesecake whose monotony was broken by its caramel topping and drizzle of sea salt, for your brother’s signature steak… for that little bit of sunshine.